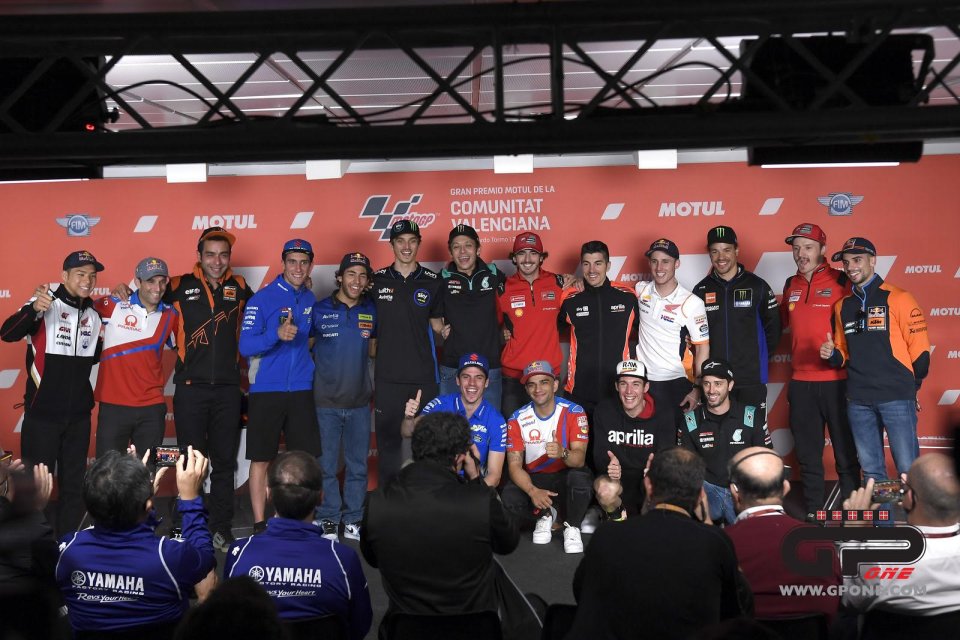 Valentino Rossi wanted all the MotoGP riders next to him for a photo at the end of his farewell press conference to the world championship. There is not one who does not have a memory linked to the Doctor, also because most of them grew up watching his exploits on TV.

Starting with the newly-crowned world champion Fabio Quartararo: "I think that Valentino will also be missed by all those who said he should stop because of his results - said the Frenchman - Today is a sad day because a legend of this sport stops, he was an inspiration to me since I was little, he is my idol ".

Bagnaia has a special rapport with the Doctor as he is his pupil in the Riders’ Academy: "I was lucky to race in MotoGP with him and even more so to be part of his life – were Pecco's words - We spent many days together, we trained together and I have to thank him for all the work he has done for us. Today is a hard day, it is normal that sooner or later the time to stop comes but no one will ever forget what he did".

Also for Mir Valentino was an inspiration: "I grew up watching him win, seeing the way he celebrated, he was my idol - he recalled - It was a pleasure to race with him, like winning a title with him on the track. Now I wish him the best for the future”.

Jack Miller didn't shy away either from digging into the memory chest. “I would never have imagined racing with Valentino when I was a child, as well as being on the podium with him at Austin. He did a lot for this sport and paved the way for the new generations”.

Of all of them, the one who met the Doctor first was Petrucci: "My father was a truck driver in the world championship and Valentino had come to take his first motorhome from our house - he said - Another special memory is the Assen race in 2017, the last one he won and in which we fought against each other”.

Alex Marquez's comment was a bit cooler. “I don't always have good memories related to Valentino - he candidly admitted - I remember him when I watched his battles against Lorenzo and Pedrosa, even though I was cheering for Dani. In any case, it was an honour to share the track with a legend like him, we just have to thank him for everything he has done”.

The riders were also asked about an urban legend that has been around for some time now: an agreement between them all to let Rossi pass on Sunday and thus give him his 200th podium in MotoGP.

"If it were up to me I would do it too, but I don't think he would like to get it that way," Quartararo observed. "In the end, a podium is always a podium - smiled Bagnaia - It seems to me too difficult a thing to do, if anything it would be nice to do the lap of honour with all of us riders behind him". An idea that Mir also likes: “I'll try to be close to him on that last lap. However, you never know, maybe he will surprise us and fight with us on Sunday”.

Miller thought of solving everything with a laugh: “It depends on how much you pay, I'm a businessman! Seriously, I don't think he would like it”. Petrucci also agrees with him: "Vale will want to race as always, seeing him get on the podium again would be nice but only if he does so in the right way".

Bagnaia: "When I get angry I take a deep breath, Rossi taught me that"