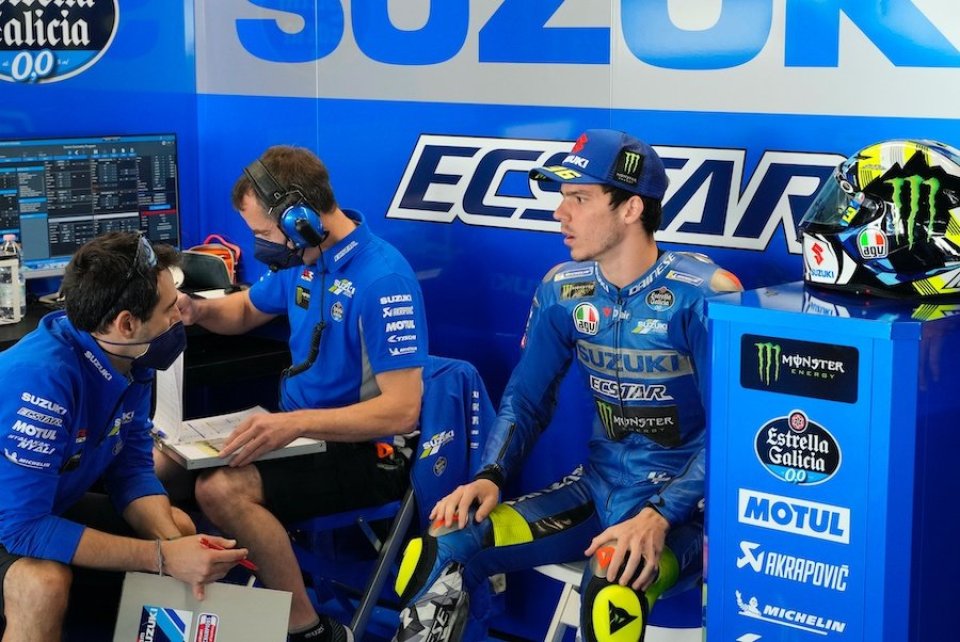 Joan Mir confirms his expectations after what can perhaps be called the best weekend of his season. The front row start gave him the chance to chase Bagnaia’s Ducati, but his Suzuki failed to overcome the two tenths of a second he needed. So, he ended the race on the second step of the podium, after the Portuguese GP was abruptly interrupted by the red flag, with three laps to go, following the accident where Oliveira ended up being wedged between his bike and Iker Lecuona’s.

Do you feel relieved thanks to this result, after last weekend in Misano? It seems like the break you mentioned has paid off and lifted a heavy weight from your shoulders.
“I’m really happy for this podium,” Joan stated. “More than the result itself, I’m happy with how the whole weekend went. We were fast starting from the FP1, and I was finally able to enjoy a race weekend where everything went well. When you have fun, you can also get excellent results in the race. I’m very grateful to Suzuki, whcih never stopped working and improving the bike, in order to give me the opportunity to achieve this result. I have to admit that Pecco was very fast today. He was able to race really efficiently, keeping the same pace for every lap. Now we have to think about doing well in Valencia too. The last race of the championship.”

Speaking of Valencia. It was the circuit last year where you were crowned champion. After a season during which you faced several obstacles, what are your expectations for the last race of this long season?
“I’m optimistic. It’s a circuit where I can usually produce excellent results, and also the motorcycle package has improved considerably. I think we have the potential to do well and finish the championship in the best way possible.”

Yesterday you talked about how the evolution of the new device influenced Suzuki’s improvement in the last stages of the championship. Would you say that today was your trump card, or do you think starting in the front row played a greater role in this podium?
“Obviously, the device has its share of merit. After all, the other riders also use it, and having it allows us to battle it out on an equal footing.”

Speaking with Pecco, it seems that the Ducati 2022 package is already at an excellent starting point. What is your perception of Suzuki for 2022?
“In my case, I think Suzuki has figured out which points to work on since mid-season, and I know that they’re working hard in Japan. I foresee some very demanding winter tests. I can’t wait for the tests in Jerez.”