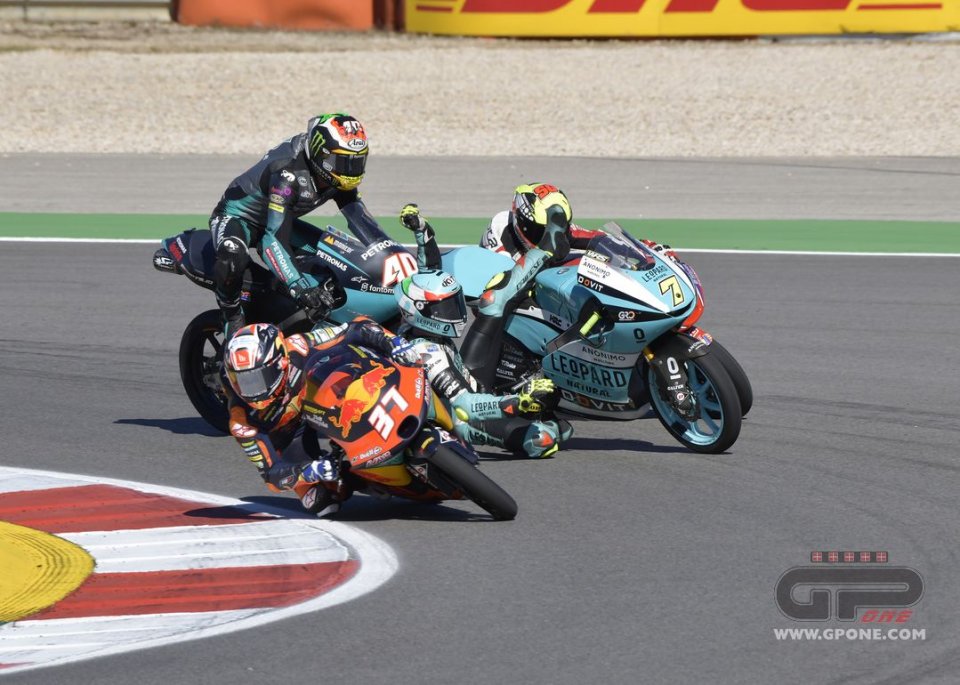 Today Darryn Binder came into the spotlight once again for the wrong reasons. The South African took out Dennis Foggia on the last lap of the Moto3 race in Portimao, thus ending the world championship battle in favour of Acosta. The Petronas team rider is not new to causing certain accidents and next year he will be in MotoGP, which has started to worry more than one rider.

Bagnaia, on this point, was categorical in his opinion: “I think that like in the car championships we need a superlicence – he proposed – so that if you are doing something in your championship you can move to the next level. Today what we saw is normality, because we’ve seen a lot of crashes like this from him. Next year he will be with us and with MotoGP we are faster. I hope that it won’t happen, but it’s something that they have to think of.”

For Mir an exemplary punishment is required: “For sure it isn’t the first time this rider had made some manoeuvre like this. What’s so important is that you have to penalise these moves. Not for the race, but maybe a race out or maybe more. Because if not, it’ll happen again. Thankfully today nothing happened to Foggia and Garcia, but it can, especially in Moto3.”

Miller took a bit of a more lenient view: “It can happen to make a mistake, many times we touch each other in the race – was his opinion - Today nothing different happened than what normally happens in Moto3. It was certainly not good for Foggia and not even for Acosta, who could not fight to the end for the title against his opponent. But I don't think we need to be worried that Binder will arrive in MotoGP, it's another level and then we all make mistakes ”.

As for a possible disqualification of Darryn for Valencia, Pecco preferred not to express his opinion. “There are Stewards to take care of this, I'm lucky I don't have to make certain decisions”.

Joan, on the other hand, while conceding some mitigating circumstances to Darryn, thinks that a severe measure is needed. "I agree with Jack when he says that accidents can happen, not everything is the fault of Darryn, but the pressure he has is unbelievable. He has to show why he’s going to MotoGP next year, and for sure that pressure is not helping him to make good decisions - explained the Suzuki rider - So also that the fact that he decided the outcome of the title makes this mistake bigger, however, if we talk about safety, then it must become an example for the other riders so that it does not happen again. We need more severe penalties ”.

Miller, on the other hand, continued to play the role of defence attorney. Not because the Australian wants to exonerate Binder, but because he tries to put himself in his shoes.

“Darryn is a bit of a wild rider, but anyone can make mistakes like that. Even Valentino has made them – he declared – The pressure for MotoGP is great and he doesn't know what awaits him yet, he's just scratching the surface. To be honest, I didn't agree with Oncu’s disqualification either. What happens in Moto3 I think is not a problem of age, but of respect. Mir and I have had some problems recently, but I respect him and I understand his point of view ”.

Bagnaia convinced 2021 feelings are back and now everything is easier

Bagnaia 100% convinced about the choice of ‘mixed’ Ducati engine combination