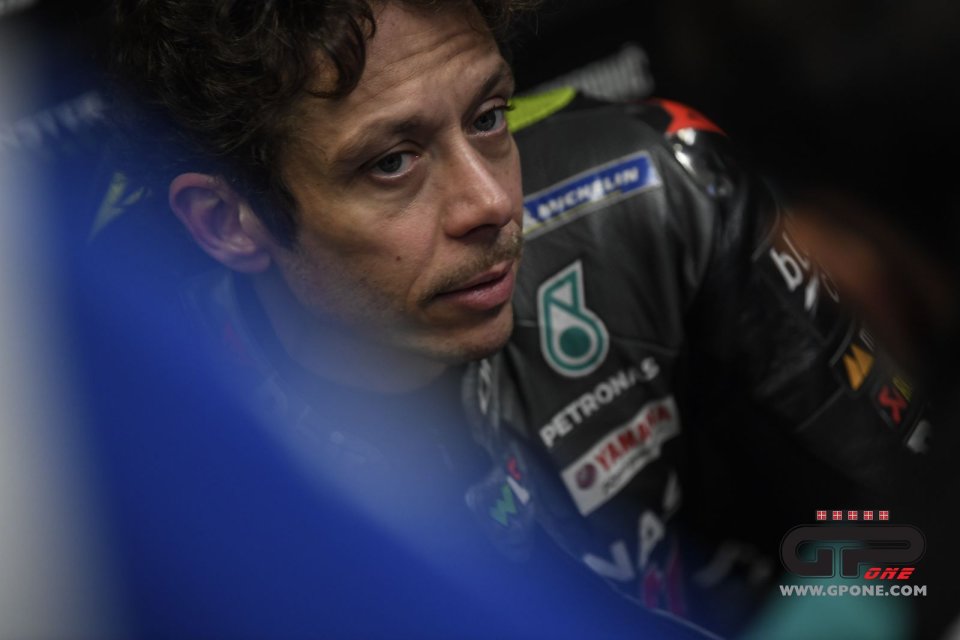 One week to go until dawn arrives. Four practice sessions, a qualifying run, a Grand Prix and then Valentino Rossi's (long) career will come to an end, 9 world titles, 89 wins, 199 podiums, 55 poles and 76 fastest laps since that far-off debut in 1996.

He undoubtedly thought, and hoped, that everything would end differently; the Phenom - because he was, let’s face it – must have thought, and hoped that he had greater speed in that right wrist which, as his fans always proclaimed, contained half a second more than all the others.

But retiring undefeated and victorious is a gift that the god of sportsmen gives to very few, so in Portimao Vale finished in 13th position over 22 seconds behind the winner, Pecco Bagnaia, one of his pupils of the Academy, and battling with his brother, Luca Marini.

“The first goal was to get into the points - pointed out Rossi, who added - the race was very fast and I had a good pace compared to practice. I was behind my brother Luca, and I would also have tried to attack him at the end, but the red flag arrived ”.

A moment’s pause for further analysis…

"The tyre choice was the right one, I didn't have a good pace with the medium, while with the hard there was some loss of grip, but they were consistent ... pity about the red flag, in the last part of the track Luca was faster than me, but for sure I would have tried ”.

Luca starts from here, Vale ends here instead. One more week and then he will be able to dedicate himself to his new-born family, still a racer, but this time on four wheels and mainly in order not to abruptly disconnect from a life that, irrespective of the massive satisfaction, is like a drug. The need for speed, the Americans say. Speed: Vale still can't do without it. Then, for sure, other satisfaction will come, because life goes on and changes, even if the competition he has in his blood will remain forever.

"This was my penultimate race: for me the most important thing is the result, and this season has been tough for me - continued Vale, who added, almost speaking to himself - I hoped to go faster, but I'm calm" .

I was hoping to go faster, but I'm calm.

Valentino Rossi's retirement is all in this sentence.

I was hoping to go faster.

Because at a certain point one makes, one is forced to make peace even with one's own demons…

"On the one hand, I'm a bit sad, but on the other hand it's been a long and tough season. The last race is in Valencia, on a difficult track for me, but I'll try to score points there too. "

Scoring points is not a surrender for Rossi. On the track he fights against opponents who are half his age, and we cannot expect the rider from Pesaro - who set the 17th fastest time in the race in Portimao, better than Bradl, Morbidelli, Marini and Dovizioso painfully last – to still have the speed of better days.

"Yesterday nine-tenths behind, I was 16th ... today the electronics help a lot to be consistent. It is also true that everyone is very well prepared, and there are a lot of world champions on the track. I agree with Casey that the bikes are easier today, but that's what MotoGP is now. Dorna worked to have a very balanced starting grid, they got there, this result is good ”.

So it is now time for memories…

“Which track will I miss? I'll miss Mugello, Barcelona where I've always enjoyed myself in my career, Assen, which is still the cathedral of motorcycling, and then Phillip Island, tough, fast and you can also see the sea ... ".

The regret that brings every love story to an end opens up to the wisdom of having seen, if not all, much of modern-day motorcycle racing which, however, by its very definition, is fast and projected forward.

“What happened in Moto3 was not much fun for Foggia, it's hard to finish a season like that - said Valentino - I don't know if the super licence, which Pecco asked for to safeguard against jumps in category, is necessary. Sure there are pilots like Darryl Binder who are super super aggressive. It is more a decision about each individual rider, which should be made, than having a super license. A pity about Foggia, but I'm happy for Migno and Antonelli, a double podium for the academy. Andrea and Niccolò have been with us from the start, so we are very happy when they are on the podium. "

The subject of Binder keeps Vale from moving on to another topic...

“There are dynamics behind his promotion to MotoGP, because Petronas haver confidence in him. Everyone here is convinced that he is a fast rider. The fact is that there are some riders who are a little too aggressive, it's not a surprise, and they are always the same ones. We should talk to them, because we need more respect among riders ”.

It is time to hand the baton over and Rossi knows he has played an important role with his VR46 Academy which in 2020 launched Morbidelli and today is spearheaded by Bagnaia. Two world championship runners-up in the premier class in two consecutive seasons.

“Pecco was very good today: he was the fastest, always, he rides very well and I enjoy seeing how he rides the Ducati, it's exciting. He is ready: it is a pity that he crashed out at Misano with the hard tyre. Today, however, he did the right thing in putting on the medium, I had recommended the hard... ".

Rossi's heir is a young guy with a clean riding style and temperamentally the opposite of Valentino. On the track he resembles Lorenzo a bit....

“Pecco similar to Lorenzo? I know him very well, he has a lot of courage and a particular way of riding. As he has been able to use the style he had in Moto2 also in MotoGP, he has made the leap forward. Lorenzo was cleaner, Pecco is more aggressive… even if off the track you wouldn't think so. He is ready to win the world championship, but it will be difficult because he has found opponents like Quartararo ... Bagnaia and Ducati have some regrets: they could have won again this year. The decisive mistake was the crash at Mugello at Arrabbiata 2, when he strayed onto the white line and Quartararo won. This end of the season, however, must be a good omen: he presents himself as the number 1 challenger in 2021, if not the favourite ".