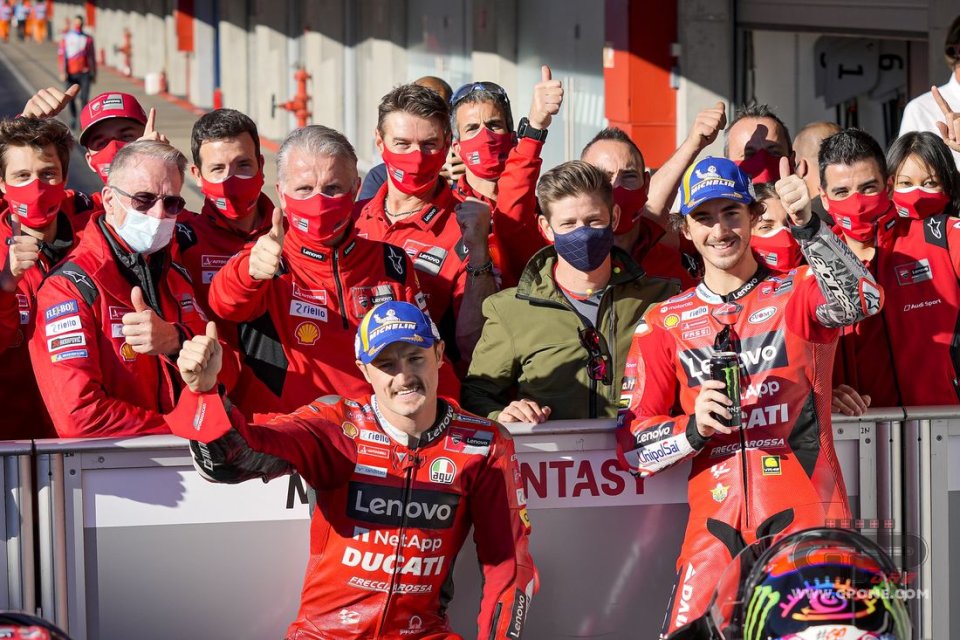 Bagnaia is rapidly boosting his collection of watches for pole position, today he received another one in Portimao and it was the 5th in a row that he is taking home. An excellent job, enhanced by Miller's second place, the best possible result for Ducati which is aiming for the constructors' and teams' titles. Pecco knows he has a golden opportunity to forget the crash at Misano.

"I'm very happy, from the first session I enjoyed myself and I feel good on my Desmosedici - he explained - We worked well and now I'm fast even in the last sector of the track, where I was struggling."

“It would be a nice present from Ducati if we had him next year – was the Italian’s desire - Having a different point of view is useful, especially that of a legend like Casey. At the moment we don't have a coach, but it helps a lot ”.

Stoner is taking his role seriously and the two Ducati riders thanked him.

"With his advice he helped me to improve in the last corner - explained Pecco - The best thing is his approach, he still has the mentality of a rider and is able to get inside our heads to better understand the situation. In addition, he was trackside and explained to us what the other riders do different from us ”.

In addition to Stoner's advice, Bagnaia can also count on that of Valentino, who said he gets worried when he thinks about which tyre his protégé will choose. Rossi would also be available next year.

“Then I'll also ask Valentino to be my coach - smiled Pecco - Seriously, if I had crashed in Misano on the first or second lap it would certainly have been the fault of the tyre, but it happened at the end. However, tomorrow the choice will be easier, on the front it is obligatory, there is nothing dangerous".

The Ducati rider will still be careful not to make any other mistakes.

"I swear I will not use the hard front tyre! - he continued to joke - If anything, the choice is open at the rear, because I was fast with both the hard and the medium in FP4. Now the engineers are studying the data to figure out which one will be best. The hard takes more time to get up to temperature but it allows you to push harder, the medium needs to be managed but it worked well in the April race. Whatever the choice, I'm sure I'll be competitive ”.