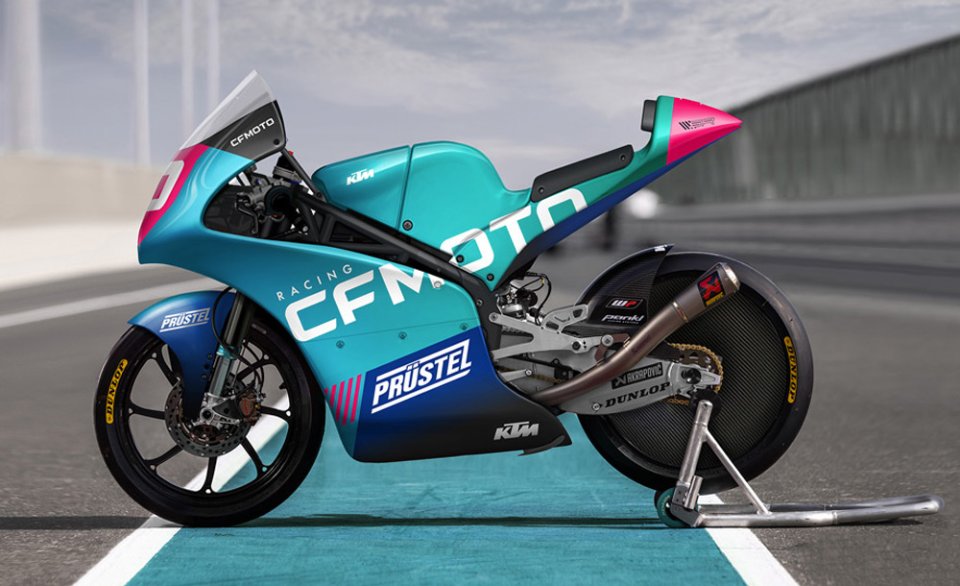 2022 Grand Prix racing will welcome a new brand to the grid. CFMOTO and Prüstel GP have closed an agreement to bring the expanding Chinese manufacturer into the world championship and to the gripping cut-and-thrust of Moto3 competition with riders Xavier Artigas and Carlos Tatay at the bars.

CFMOTO was founded in 1989 and has carved a strong position in the global motorcycle and ATV industry with its emphasis on technology and quality, a distribution network in more than 100 countries and more than 100 vehicles models in a burgeoning product catalogue. They have entered various domestic racing series’ through international subsidiaries and have competed at the Isle of Man TT since 2013 as the only factory team from China.

In 2018 CFMOTO and the Pierer Mobility Group officially forged a joint venture to start production of KTM’s midweight street naked bikes based on the highly rated LC8c engine concept and with models such as the KTM 890 DUKE due to roll off the lines in Hangzhou, southwest of Shanghai, by the end of 2022.

CFMOTO’s Grand Prix equipment will be based on the Moto3 world championship winning KTM RC4 machinery and with the company having full access to the experience and engineering acumen accrued by their technical partners.

Xavier Artigas and Carlos Tatay represent and all-Spanish roster for 2022. Artigas, 18-years old, scored a podium finish on his maiden Grand Prix appearance at Valencia in 2019 after having previously placed in the top three of the Red Bull MotoGP Rookies Cup. 2021 was his first full season at world championship level. Tatay, also 18, is a former Red Bull MotoGP Rookies Cup Champion as well as a race winner in the FIM CEV Junior World Championship. 2022 will be his third term in Grand Prix.

Prüstel GP reached five years of existence during the 2021 season and have fielded GP victors like John McPhee and 2020 world champion Albert Arenas. The professionally run family team are based in the Saxony area of Germany.

Su Zhen, CFMOTO Racing Development Manager: “Entering the category and the Grand Prix motorcycling world championship means a new adventure for us and one we are very excited about. We are grateful to have some strong partners, like the Prüstel GP team, and we know the series is very competitive. We cannot wait to start, and we will also look to challenge more international racing events in the future. We hope fans, especially the ones in China, will follow us on our journey!”

Florian Prüstel, Team Manager:  “Thanks a lot to CFMOTO. We are proud that Prüstel GP can collaborate on a project like this. In tricky times worldwide - and also for motorsports – we are grateful to have a partner like CFMOTO on our side. With this big global manufacturer behind us we will have a great opportunity to bring the best sporting results and media exposure for the brand.”

China assails the Moto3: QJMotor with Esponsorama Avintia in 2022