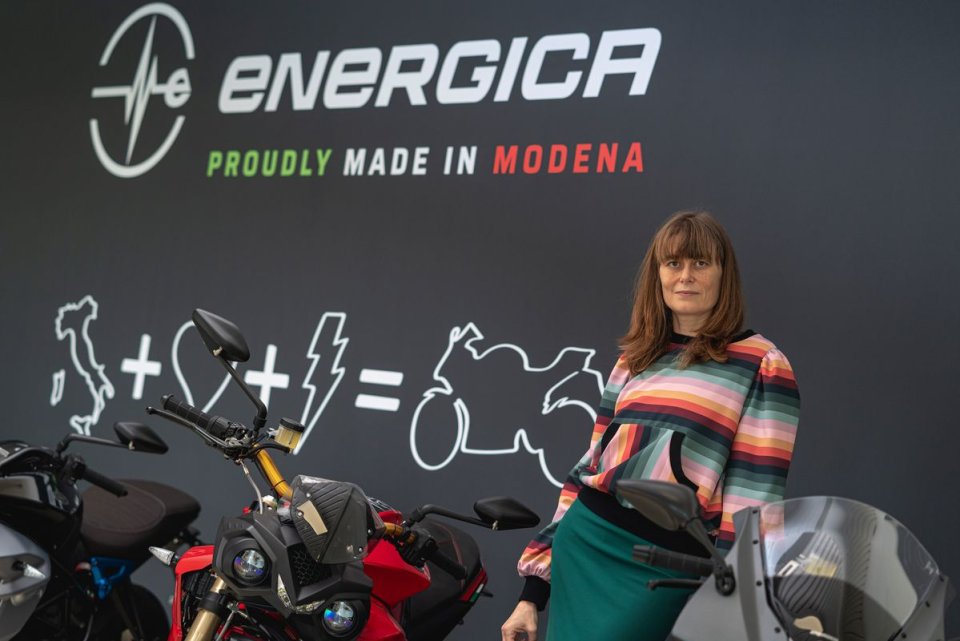 Energica’s journey in MotoE draws to a close at the end of 2022, as announced by Dorna and by the Modena-based manufacturer few days ago. This is the end of a wonderful story, which allowed the first electric-powered motorcycle racing championship to be born, to grow and assert itself as a more than solid reality in the international racing world.

Energica’s CEO Livia Cevolini is a strong woman who loves challenges and who enthusiastically accepted to be part of this championship by providing a reliable and fast bike. This allowed the newly born series to overcome the scepticism of a crowd that can be at times maybe a bit too traditionalist. It was a mission, one that was accomplished in all ways and that now leaves room for this young company to tackle new challenges. Livia Cevolini took part in a virtual meeting with journalists as she assessed the partnership with Dorna – which ends at the end of next year – while covering plenty of other topics.

“We are innovators, and we only want to do new things. MotoE ended up not being an innovation anymore – said Cevolini - We’re a small company: we must evolve, and we want to be leaders in every market we approach. We started at this level and grew, but after a year we looked around and understood that anyone could have done what we were doing: we asked ourselves what we were doing because it kind of became useless to us, to our strategy. We are now looking for other projects to focus on as well as new markets – like the ones connected to micro mobility such as scooters, e-bikes and so on. We spoke to our investors about it, and I think we’re doing a really good job as it enables us to invest our know-how into markets we consider very important. We talked to Dorna, who was looking for new faces for the future and then decided to end our partnership in 2022 as per contract and then go our separate ways. When more manufacturers will be involved in the series – for some real competition – maybe it will be interesting for us to return. We can’t do everything; we need to choose what to do. We don’t want to be followers, but be the leaders in what we do.”

What has the biggest task to undertake during these seasons?
“We started MotoE with plenty of experience already both with regards to the bike and the racing world. The task was to make not two, but 20 identically performing bikes. I don’t want to say anyone can copy us, but surely anyone can take our example in order to do something similar. I think whoever will do it will do a good job and I hope this is the case, because we can’t be the only ones doing it. We are here to change mobility, so we need other manufacturers so that our mission can succeed. I think it’s also an excellent thing for the championship because new challenges will arise. It may be interesting to come back once there’ll be other manufacturers to fight with.”

What impact did MotoE have on your market?
“MotoE was important in order to introduce the world of electric motorcycles to some markets. This championship allowed to clear up some doubts to many while giving the opportunity to this market to grow. Surely this is no MotoGP: I would have loved to see the same type of media coverage. As I am a dreamer and I wish to change mobility, I dream of seeing sooner or later a true electric MotoGP. But until this happens, at least I can say that MotoE is a good start to head in the right direction. I twill take time.

It was a great challenge, but new ones will arrive.
“We come from a land where competition is everything. No challenge scares us, we like to react quickly to issues and find solutions to them. MotoE allowed us to show ourselves what we can do. When I was first told about MotoE, I went to my engineers and I just said, “we have to do it”. We’re a small group of people, but we’re doing everything together. They told me that they did not have the potential or resources to do it, but I replied saying I would have found a solution by finding new technicians and the amount of investment needed. I was right, because my approach reassured them so that they could put themselves to the test and show themselves what they were capable of. I was right, and by doing so we now have better awareness. We were the first to do such a thing and now we know we can do it: this is the best thing we have learned, especially about ourselves.”

What are you going to focus on?
“We are approaching new clients in different segments. We made an agreement with Dell’Orto that gave birth to a new Power Unit, which we are selling to different clients. It starts from 2kw all the way to 40kw, so from electric scooters to small electric motorcycles. A lot of research is needed supplier-wise. We started from the top-end, because this what we know best, but now I like the idea to apply our know-how to a much wider range of products.”

What will you do in 2022 with MotoE, will there be new updates coming?
“The agreement with Dorna was to not bring too many updates to the bike, because the idea was to let the championship grow. We must take into consideration the fact that at the beginning, riders and mechanics were unaware even of the basics of this new technology, so an excessive development of the bike would have made their job harder. It was already a lot, as we introduced new batteries and other updates, but we always did it step by step. We wanted our bikes to be very reliable, because it was important to send a strong message about reliability and we did it. We never had a single mechanical issue in the last three years, and this is what we’ll continue doing in 2022. We have some ideas to introduce to the bike, but it must be agreed with Dorna. The goal here is to choose and then to follow Dorna’s advice.”

How much is the electric-motorcycle market growing?
“If you look outside of Italy, there have never been as many electric vehicles as today. Our current issue is that we are unable to deliver all the orders we have. The demand is huge right now, even though it’s not comparable to the one of internal-combustion four-wheelers, but it’s growing much quicker that I had expected – and I’m a very positive person. It’s truly impressive. I would like this gap to be further narrowed down in the future – we need to improve our production numbers. This is why I would like to have more manufacturers in MotoE, because this would give better credibility to the series and to all the two-wheeled electric mobility movement. I always thought that a revolution in the mobility sector would take place, and I think it has already started. This is what racing has taught us: we don’t have to think that what we do for the riders is enough. It taught us to always push further, to always ask ourselves what we could have done for them. In some ways these are the same requests coming from our customers, who want a bike that is always better-looking, more powerful, and more reliable. The world of racing is a great challenge and if we are successful there, then we’ll be successful on the market, too. We’re a small company, so tackling challenges is what makes us grow.”

Your dream is still a MotoE series open to different manufacturers.
“My dream is to see a MotoE class with many manufacturers involved and maybe we’ll return once it will be this way, but right now it is impossible because riders, mechanics and teams need time. It will be possible in the future and maybe we’ll be there, too. True racing is between different manufactures developing different bikes. This is my dream, if we also consider the visibility and technology it would bring. It would push past the limits in every direction. It would allow everyone to push past their own limits, but I think right now it would be too difficult for teams and riders.”

Energica was a family business, but it looks like it is growing too much to stay this way.
“I would like it to stay as a family business, but things are growing too rapidly to keep it this way. We were 20 in September, now we’re 40. Things are changing because the market is grown extremely quick. The series gave credibility to electric motorcycles and there’s a lot more trust now. It helped our brand a lot, it gave us plenty of credibility. The fact that the electric-car sector is growing so much is surely affecting us in a positive way, too. The two things are interconnected.”

The new partner Ideanomics has arrived – a fund quoted in the Nasdaq stock market. How does this affect the company?
“Ideanomics has helped us a lot. Today we are the bridgehead of the American partner that joined last March, and after agreeing with them, we launched a takeover bid in September: Ideanomics could get up to 70% of the ownership. They are an important financial partner, while we stay as the head of design, development and production.”