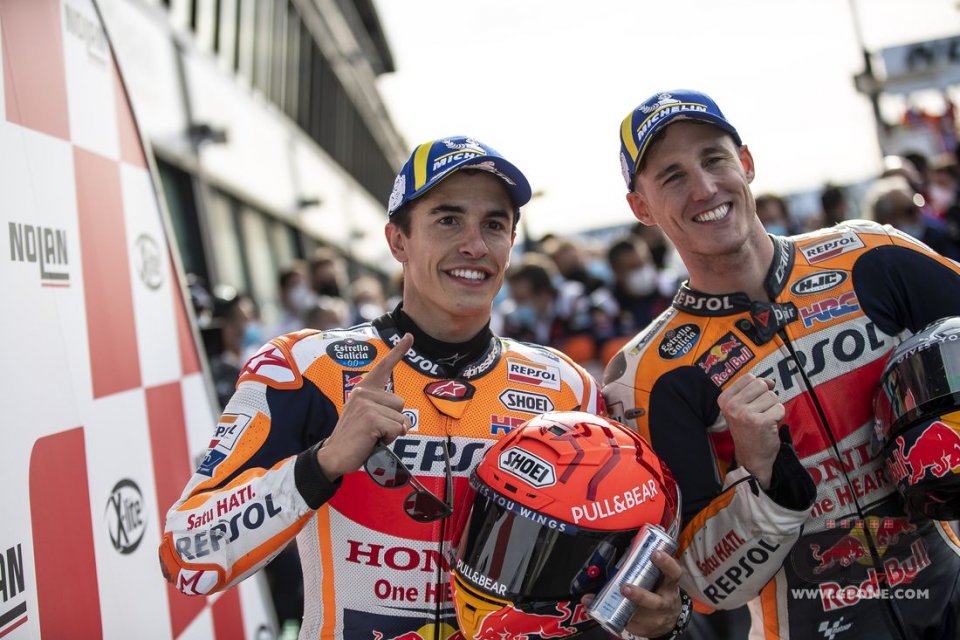 Honda’s last double win in the MotoGP dates back to 2017, when Marquez won ahead of Pedrosa in the Aragon GP. But they broke their fast last Sunday in Misano, with Marc on the top step of the podium and Pol Espargarò at his side. A result that was far from foreseeable, because Marquez won on a circuit that runs clockwise (unlike Sachsenring and Austin) and puts more stress on his right shoulder while, for Pol, it was his 2nd place and best result ever in the MotoGP.

“We approached this weekend with the will to compare this race with the first at Misano, in order to see our progress. Reaching this result is fantastic,” team manager Alberto Puig commented.  “A double win is never easy, even when you’re in the best condition. This isn’t our best moment, but we still managed to get this fantastic result. I think it’s due to a combination of factors. A great effort by our riders, Honda’s continuous work, Repsol’s great support, and all our other sponsors. And, of course, the hard work of the team members. We’ve clearly shown that we’ll never give up. This result is a great feeling, a great reward, for everyone involved in this project.”

Marquez isn't in the best physical condition yet, but he has once again shown that he’s a winner.

"This is an even more difficult time for Marc than for everyone else. He’s still recovering, he still has problems, he hasn’t yet returned to his best condition. He knows that and we know it,”  the manager from Spain underlined. “That’s why this victory at Misano, especially on this track, is even more valuable to him. What this guy is doing, nobody knows but him.”

Alberto also congratulated Espargarò, who seems to have finally found the way to progress.

“Pol faced a very difficult season with high expectations. We know it wasn’t easy, but the good thing is that he never gives up,” he explained. “He always tries to find a solution, just like his team. His group shares his attitude of never giving up. So, in the end, it was like a gift. He deserves it, but it was also a gift for the team and for Honda, because we’re all helping him as best we can. We’re very happy for him and the fact that he's achieved his best result ever on Honda. With his first podium in these colors, he’s shown his  potential. Now we hope that his confidence continues to grow and that he can continue to push the bike to the limit.”

There are still two races left to finish a season that had started out  badly.

“This is a winning team, and our approach is always to try to win. Our goal is to fight for the title every year,” Puig said. “The only difference is that sometimes the situation isn’t perfect. The last two years have not been easy for us, but you won’t find a single person on this team who wants to go to the next race to try and finish second. We’ll go to the next race trying to win again because this is Honda.”

“We want to congratulate Fabio and Yamaha on their title in Misano. Two races from the end of the championship. They deserved it. Fabio has been the best rider this season. He’s won five races, he’s scored many podiums, and he really deserved it.”

Puig waiting for Marquez’s return and attacks Michelin after Mandalika