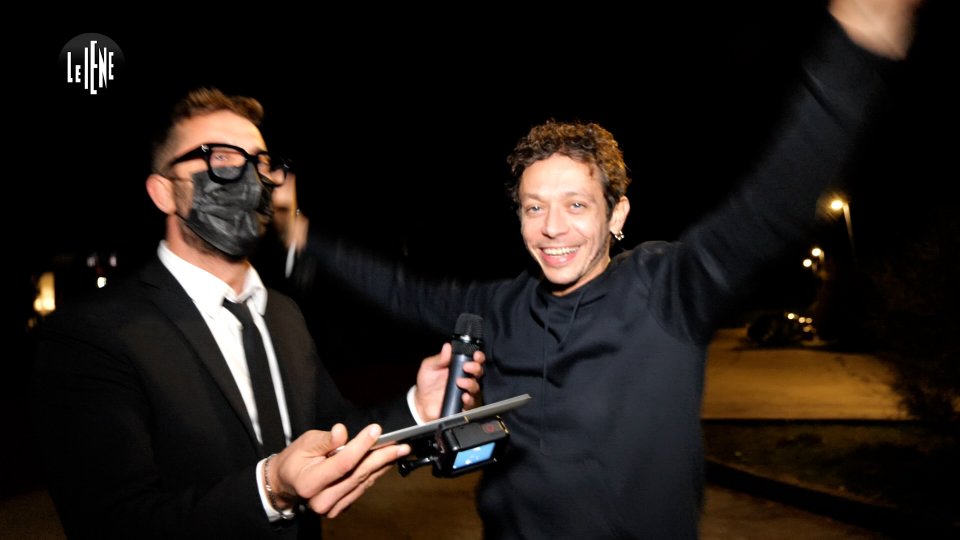 Tonight in prime time on Italia 1’s satire/investigation programme "Le Iene", one of the most successful riders in the world, Valentino Rossi, retraces the main stages of his career in an interview. Interviewed by Stefano Corti on the day of his last Italian MotoGP race at the Misano circuit, the champion underwent a nice game of ‘guess the race’ on hearing the commentary. Valentino Rossi guessed them all in a few seconds but one last audio seemed to put him in difficulty: it was his tenth world championship victory, specially created by the programme with the complicity of Guido Meda, to pay homage to his legendary and successful career. Completing the tribute was also a symbolic cup, handed over for the occasion by his partner Francesca Sofia Novello, soon to be the mother of their first daughter. This is the full interview:

Corti: Despite your retirement, you are in great shape.

Rossi: Thank you, thank you! But I'm disappointed to retire.

Corti: Are you ready to take the plunge?

Rossi: I would say yes, come on. I continue to be a racer, I will race with a car next year, I will stay on the track, otherwise I will get bored!

Corti: We already have the team, do we already know where?

Rossi: I will race with GT cars, Endurance series, but now we just have to understand which championship to do.

Corti: When did this retirement thing come about?

Rossi: I thought about continuing this year but I said, I’ll see how competitive I am, if I can win, if I can get on the podium, if I can do good races. But this year has been tougher than expected, I expected to go a little faster, to struggle less. After the Assen race, and I had set out to decide calmly there, I waited a week and then I said, OK time to go.

Corti: You had nothing left?

Rossi: Do you know what the problem is? It is that I am old! I'm 42, the other riders are 25. Had I been younger there would have been time to reconsider but that's okay now.

Corti: Going to Misano for your last race in Italy, how was it?

Rossi: Nice. It was a very exciting weekend with a great atmosphere. It was full of people, full of fans. Then I'm happy because I managed to do a good race. I started back and finished tenth, I was able to go pretty fast, I did some overtaking, I enjoyed it, so it was the best way to say farewell to all the fans. And after the chequered flag I stopped under the grandstand, I throw my helmet into the crowd, it was nice.

Corti: What does the World Championship lose without Valentino Rossi?

Rossi: Well, before motorcycle racing was a fairly well-known sport but a little more niche. With me a lot of people approached motorcycles, people who did not know them: from small children to 80-year-old ladies, I have big success with 80-year-old ladies! That was the beauty of it, it became more famous. However, there are a lot of Italian riders ...

Rossi: Francesco Bagnaia, Franco Morbidelli, my brother (Luca Marini, ed.), Enea Bastianini, there are four Italian riders next year in MotoGP who can be strong. It will be a little different but it will be just as great!

Corti: Is it more exciting to win a world title or to know that you are a dad?

Rossi: Knowing you will become a dad is certainly more exciting, winning the world championship is more adrenaline-fuelled.

Corti: Have you chosen the name?

Rossi: There are still two or three to choose from!

Corti: A name that you have already ruled out?

Rossi: Valentina for me, Sofia for her (looks at his partner, ed.), We liked Vittoria… we’ll see!

Corti: We went to see Guido, who became Guido Meda thanks to the commentaries he dedicated to you and we prepared a quick little game where we put together the best moments of your legendary career. We’ll show them to you and you have to guess what the race is.

Corti shows the video footage with the most important stages of the Italian rider’s career and Rossi guesses them all in a few seconds.

Corti: What memories do you have of your first world title?

The second: the Grand Prix of Japan at the Suzuka circuit in 2001.

Rossi: The track was fantastic and there was a great fight with Max Biaggi, I tried a pass on the outside, he elbowed me, then I overtook him and showed him the middle finger. It was a great moment! A fantastic rivalry in which we were fighting to win the world championship and this was a bit of a street fight, but it was nice.

Corti: Did you happen to meet him and talk to him about this moment?

Rossi: When we were racing together our relationships weren't wonderful, now when we see each other we say hello, we shared something together and it was nice.

The third: your first victory with the new bike in the MotoGP world championship in Rio, in 2002.

Rossi: It was a very difficult race, it was very wet.

The fourth: from Honda to Yamaha, the world championship victory at Phillip Island in 2004.

Rossi: This is probably the best victory of my career. With Gibernau it was a tough rivalry. At the beginning we were sort of friends, afterwards a bit less ... it's very difficult to get along when fighting for the World Championship together. Between the two I got along less well with Biaggi, with him the rivalry was much longer.

The fifth: in 2008 your return to a world championship victory with Yamaha.

Rossi: It was great because here, after losing in 2006 and 2007, I went back to winning. Here I beat Stoner, Lorenzo, Pedrosa. This was one of the best races of my career. Even with Stoner when we fought the relationship was tough.

The sixth: your one hundredth victory, in 2009, at Assen, in the Netherlands.

Rossi: 100 wins is a good number! Lorenzo was a great rival, now we get along well.

Corti: Looking back at these images, do you still want to quit?

Rossi: Seeing them again makes me want to race for another 10 years but that's okay. Here, in 2015, there are some very bad memories because there was a great fight between me and Lorenzo and we had some problems with Marquez that made me lose. It has never happened that a champion races to make another rider lose and him not to win. I'm disappointed not to have won 10 world championships because at Valencia I made a mistake and I crashed but this hurt more. It is a big regret because I did not expect it and it has never been the same since.

Corti: Who was your biggest rival?

Corti: The one you would you go back to race against?

Corti: For this last contribution we only have the audio.

At this moment Corti plays him an audio recorded with the complicity of Guido Meda, of a fake commentary, that of his tenth victory in the world championship. It's a gift from the broadcaster to honour his achievements. When Rossi realizes it he smiles, celebrates and exclaims:

Rossi: I'm happy! Will you give me a cup? I’ve finally got my tenth world championship!

Corti: Who are you dedicating this victory to?

Rossi: To the baby who is about to be born. Thanks, it was great!

Valentino Rossi is a dad! Welcome to the world, Giulietta Rossi.