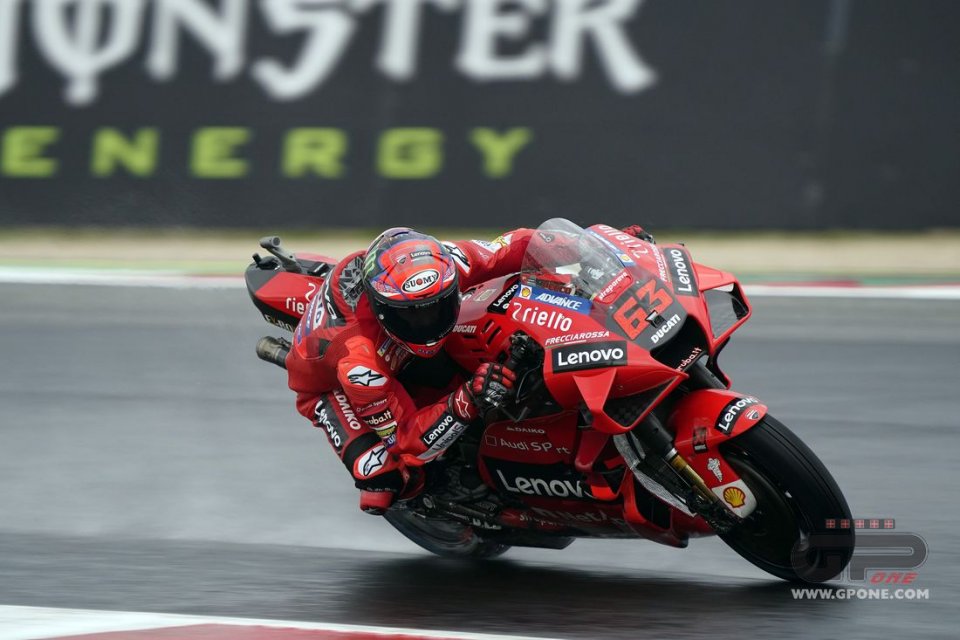 When you ride a Ducati, rain is never a problem. On the contrary, it’s the opposite. In fact, after the first day of free practice at Misano, there are 5 reds in the top 10. Bagnaia is 8th, but he’s not that worried.

“I felt great on the bike. I know our potential in wet conditions is very high, but I was unable to put together a lap without errors. In fact, my ideal time was six tenths faster,“ he pointed out. “At the moment, Zarco, and especially Miller, are more competitive than me, but that’s not a problem.”

The rain could be an ally in keeping the championship open, considering that Quartararo doesn’t like it very much.

“I’m sure Fabio will be very fast on Sunday,” Pecco continued.  “I have to work on myself to be more consistent. I had the best pace today, but I still have a lot of work to do. I know that my potential when it’s dry is greater and that the Yamaha struggles more when it’s wet, but I have to improve to be the fastest in both conditions.”

But with so many competitive Ducatis, one could think of working as a team against Quartararo.

“I sincerely hope that doesn’t happen. I’ve already been thrashed enough after Austin, when we hadn’t decided anything yet,” he said, recalling the facilitated passage with Miller. “I’m remaining focused on doing my best. If Jack is faster than me, I don’t think there will team orders.”

Bagnaia then commented on the proposal to raise the minimum age to 18 for entering the World Championship.

“Two more years seems a bit too much to me,” he stated. “Sixteen is enough to be mature. I don’t think it’ll change much. We must instead continue to do what was done with Oncu, giving actual penalties. That’s the only way to teach them.”

The Ducati rider is for “zero tolerance”.

“Losing twenty minutes in a round is useless,” has continued. “If, on the other hand, you stay home for two races, you’ll figure out that you shouldn’t do that anymore. But they also have to give these penalties during practice, where we often see incorrect behavior, and even when an accident isn’t caused. For example, Alcoba made the same maneuver on Masia like Oncu. He cut him off. Accidents have to be prevented.”

PHOTO - A black and white day for Bagnaia, guest of Juventus