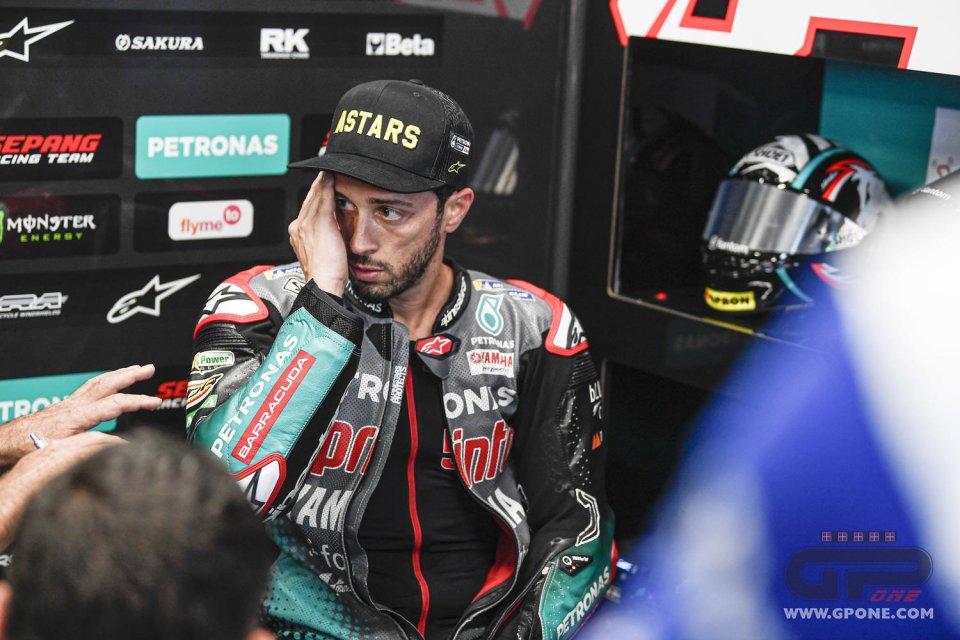 There’s not much to be excited about for Andrea Dovizioso after Friday at Misano with the Yamaha M1. The Italian rider ended the sessions propping up the grid and although the gap from the top guys was huge, the gap from his brand mates is much lower. Today’s performance derives from the inherent difficulties of this M1 in the wet combined with the rider's lack of knowledge of the bike.

It’s a situation that did not prevent Dovizioso from realizing the problems that have to be solved on a bike whose Achilles heel is the lack of rear grip. Andrea is sure, however, that as he knows the problem well, it will be possible to solve it for next season.

"The other Yamaha riders are also in a difficult situation in the wet - commented Andrea - I have already lapped here at Misano in the wet and it's nice to see that the other riders complain about the same things too, so I think the bike also behaves very well in the dry in certain areas, while the problem we have with the grip becomes even greater in the wet. I'm certainly not riding the bike in the best way, but when you have certain sensations it doesn't matter which position you are in. "

And what is really important?

"It's about finding a way to ride well and I think it's very clear what would be best for Yamaha. And it's nice that confirmation is coming from other riders like me, because I come from other bikes and it's clear to me what's wrong. it's 50% of the work, now we need to find the other 50% that would be the way to solve this problem. I may not have enough experience with the Yamaha to ask for certain things, but the problems are clear."

You are still not as fast as the others, but do you think that your indications are already being listened to by Yamaha today?

"I'm not far from the others and especially even if a rider is not the fastest with a bike but comes from another bike, the feedback is much more accurate especially at the beginning. This happens because the rider is used to adapting and has to adapt to the characteristics of the bikes. At the beginning the information is more precise, so as a result I can say that already in Austin, where I kept a good pace, I understood a lot of things. After doing two race weekends and today, the problems remain the same and so the situation is quite clear. Each rider has his own way of describing what is happening ".

"If we analyse the comments, we arrive at quite similar conclusions. Right now there are those who may have priority more on one side than on the other, but we are all pushing in the same direction. In my opinion Yamaha now has certainties about what can improve. Then time is short and tests are few, so it is not easy to improve. But this is our situation, we know what to improve and we have to try ".

Aleix Espargarò has called for a return to minibikes for the youngest, a category that you know very well and which is unfortunately disappearing…

"The experience of seven years in minibikes was very useful for me, but at the time there was virtually only that. I haven't been in it for many years, so I don't know the current situation of the various championships. I don't know the dynamics and I don't want to say anything without knowing the situation. But in my opinion today the riders already arrive ready to ride high-wheeled bikes because they have intermediate steps. In my opinion without these changes many more talented riders would have been burnt out. At the time riders went into burn-out very often in my years, because when you had to jump from a minibike to a 125 GP you were traumatized, it happened to me too ".

Are you satisfied with the minimum age limit introduced by the FIM?

"I would also set the age limit in MotoGP! Not less than thirty years to enter. I'm kidding of course."