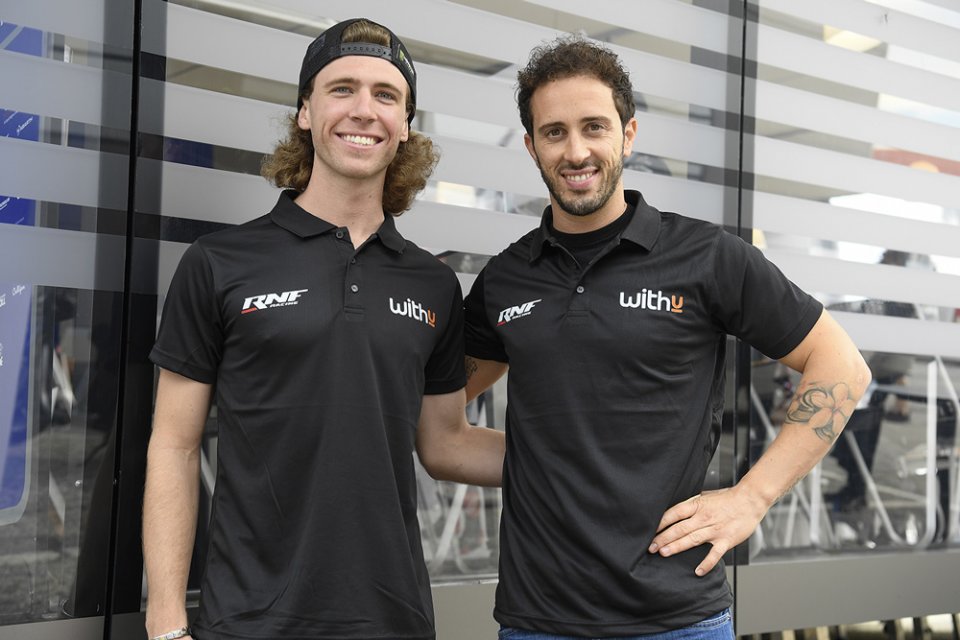 RNF Racing has officially announced the creation of the WithU Yamaha RNF MotoGP Team which will participate in the 2022 MotoGP World Championship in the premier class, with the support of Yamaha and WithU as title partner.

In 2018 WithU was one of the first to believe in and support the Sepang Racing Team project, a partnership that has contributed to increasing awareness and recognition of the brand also at an international level. From 2022, thanks to a three-year collaboration agreement, WithU continues to put its trust in this structure and their projects, becoming title sponsor of the new MotoGP Team.

WithU is a dynamic Italian brand, creator of a real revolution in the world of services for families and businesses, allowing individuals and companies to subscribe with a single operator and have electricity, gas, fibre, mobile and landline phone in a single bill.

Preceded by the official announcement from Yamaha Motor Company, WithU Yamaha RNF MotoGP Team has signed an agreement as a satellite team for next season. The technical support and material that will be provided by Yamaha will allow the team to be competitive in the 2022 MotoGP World Championship.

Led by founder and Team Principal Razlan Razali with Wilco Zeelenberg as Team Manager, the team will continue with the strategic line of flanking an experienced driver with a young talent. A solid line-up has been announced for 2022, with former MotoGP runner-up and multiple winner Andrea Dovizioso joined by promising and spectacular Moto3 rider Darryn Binder. The choice of the two riders was the result of a careful analysis shared between the Team management, Yamaha and the new title sponsor, WithU.

Razlan Razali, Founder and Team Principal RNF Racing, said: “We have today reached a historical milestone for the new WITHU YAMAHA RNF MotoGP Team. Europe Energy was one of our first two sponsors for the current PETRONAS Sepang Racing Team team back in 2018 and we are thrilled with their continued support and commitment to step up as the title partner with the new team from 2022. Despite the changes the team have faced this year, I thank Matteo Ballarin, President of Europe Energy Group and Lin Jarvis of YAMAHA for their confidence and trust in me and the team to continue this incredible journey that we are on. We have achieved so much together in the first three years of our partnership with wins, podiums, pole positions and awards. Matteo and his team are ambitious, enthusiastic and passionate. We share the same aspirations, to dream big and be competitive to perform at our very best in the World Championship. With the rider line-up now fixed, with Andrea Dovizioso and Darryn Binder, we are set to start the 2022 season with renewed motivation and confidence.”

Darryn Binder will thus make the leap from Moto3 to MotoGP, like Miller before him: “I am extremely grateful for this opportunity, as it has been a lifelong dream to race in the MotoGP category. I definitely didn’t expect to make the jump straight from Moto3 to the highest class, but I do believe I am up for the challenge and I’m ready to put in all the hard work for 2022. My target at the beginning will be just to find my feet in the big class and learn as much as possible to get stronger and stronger throughout my rookie season. I would like to say a really big thank you to YAMAHA and WITHU YAMAHA RNF MotoGP team for everything they have done to make this possible, as well as everyone who has been involved in getting me to this point. I’m also really happy to keep having WITHU supporting the team because from the first day I entered the team I could see how enthusiastic they were in this project. I’m now just looking forward to riding the YAMAHA YZR-M1 for the first time at the end of the season.”

Andrea Dovizioso will be on an official M1: “I’m really happy that finally the new WITHU YAMAHA RNF MotoGP team is official. It’s a team made up of three really professional parties and I’m really looking forward to start working with them for 2022. I’m so happy to have WITHU as the title partner of the team because Matteo is a really passionate person and it’s always nice to have this kind of motivation in a team. I’m really happy about that and to have Darryn Binder as my team-mate is something quite unique – not many riders have gone directly from Moto3 to MotoGP! I think the team have seen something interesting in him so I’m really interested too to see him on the MotoGP bike.”

Matteo Ballarin, President of Europe Energy Group, added: “The MotoGP World Championship is an exclusive and international showcase. It is a special universe where the starting grid is a stage for heroes in which WITHU has found its space by sharing its values and objectives. Five years after our first entry into the world of MotoGP, today we are more enthusiastic and motivated than ever. For WITHU, this new title sponsor experience represents not only a milestone but also a new beginning and a strong incentive. We look to 2022 with optimism and confidence, as we are organising a team led by trained, serious and experienced managers. The support and trust of YAMAHA are and will be fundamental to face the next season and the choice of the two riders confirms the seriousness of the project and the desire to play a leading role in the prestigious international MotoGP arena. This is a dream that will now become reality and that we will share with customers and passionate guests who will be involved to discover new experiences and exclusive emotions.”

Bastianini: "Overtaking Darryn Binder is risky, he made me go wide at Turn...