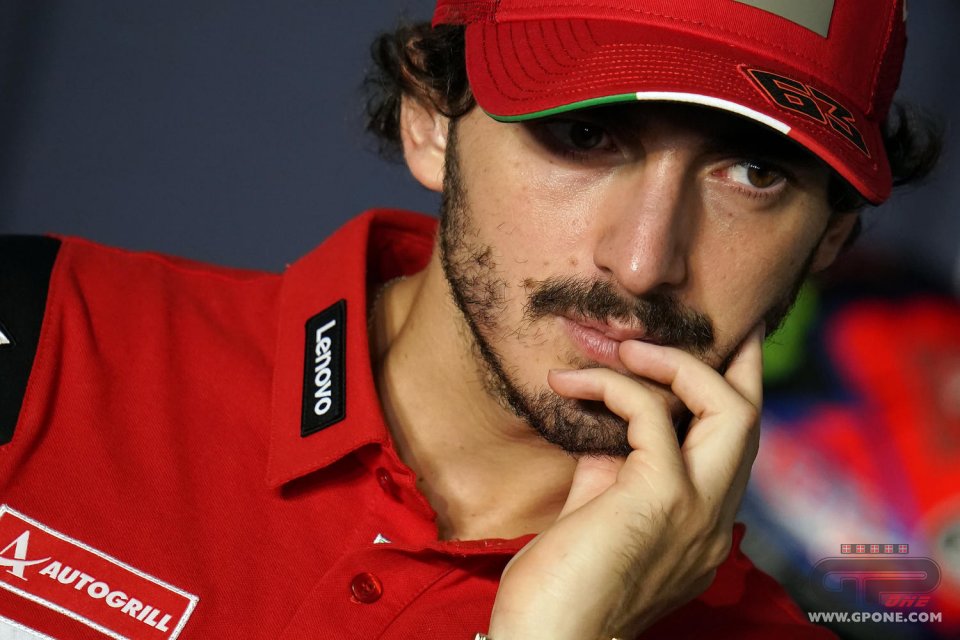 Pecco Bagnaia will certainly not be able to play any strategies at Misano and he made that plain in the press conference. His only chance of keeping the world championship alive will be to win on Sunday and this will therefore be the only goal of the Ducati rider in this second weekend of racing on the track named after Marco Simoncelli.

The win on the previous occasion must not, however, lead one to think that it’s going to be plain sailing for Pecco, who will have to deal with different weather and temperature conditions like all the riders, which are sure to affect the performance of the motorcycles and tyres. The risk is also that of upsetting the balance that had allowed the Desmosedici to bring two riders to the podium, following Bastianini's fantastic race. Bagnaia will therefore have to hope he will be able to repeat that magnificent performance and at the same time trust in a good race from his teammates, the only ones able to take more points away from Quartararo and therefore keep the world championship alive until Valencia.

“For me the only thing that I can do is win to try to stay in the fight for the championship – said Bagnaia - We know 52 points are a lot, but we will try. Still, we have the possibility, so we will try. It will be different this weekend because the conditions are more different and looks like it can rain on Friday and Saturday. The work for the race will be more difficult, so let’s see. But this weekend I have to go all in and try to make something.”

You are fighting for the world championship in your first season as a factory Ducati rider, did you expect that?

“For sure our ambition is to always improve every time, and looking at my last two seasons in MotoGP, this was not the year to try to win the championship because I was struggling a lot in the past years. I crashed a lot and I broke my tibia last year. So, I had problems. So, this year the objective was to continue my growing and I think after the summer break we did a step forward, and another one after the last races. So, I’m happy with the work we are doing this year, but for sure the work we are doing this year can be better for next year.”

Ducati has just announced its entry in MotoE from 2022. Are you curious to try the bike when it's ready?

"I am happy with Ducati's decision to join MotoE. They certainly know how to make motorcycles in Borgo Panigale and it will be interesting for me to see this type of bike born. I don't know if I like the idea of ​​trying it however."

The new calendar includes 21 races. Do you think there are too many?

"It will be nice, but we have to see if we can go to some races like Malaysia, Japan and Australia or even Indonesia. We are waiting to see the WorldSBK next month in Indonesia. But it can be nice and I would like to go, but it’s always difficult to go to some of those places. In F1 they have two more races and it's really hard for them. I don't think we'll go any further, already so there is little time to rest. Racing with MotoGP is very stressful and sometimes you have to stop, running too many races would not be good. "

What do you think about the penalty for Oncu in Moto3, is that the right way to try to avoid bad accidents?

"The only way to change the situation is to give penalties like Oncu's. He was the first, but I think others deserve such penalties. We saw Alcoba do a similar manoeuvre two laps earlier with Masia in Austin, but nothing happened. In my opinion they are too aggressive without a real reason to be. Oncu was the first and I think this is the only way to change things. "

Quartararo: “Bagnaia's penalty is an advantage to be exploited”