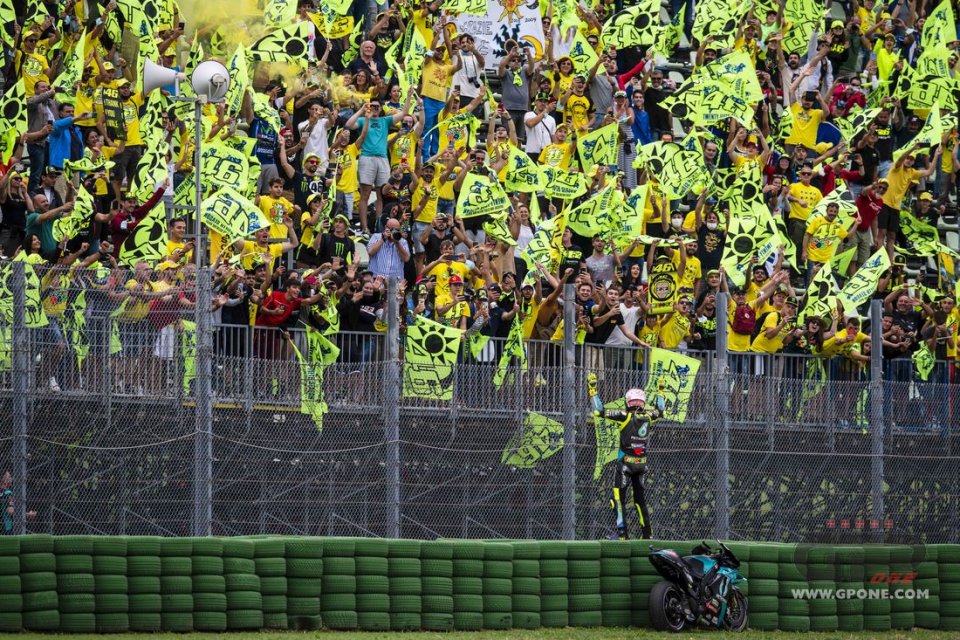 Flavio Fratesi, one of the founders and Vice-President of Rossi’s Fan Club, jokinly said last year: “If Valentino continues to race, there’s a risk that it’ll be the first case in which a fan club retires before its rider.” Now that the moment has come, with the Doctor finishing his career in Valencia, the danger has been averted and, actually, his “Yellow People” will continue, with many projects in the pipeline.

“At the moment, we’re really busy preparing for the second Grand Prix at Misano. We’ll only end up realizing on Saturday evening in Valencia that Vale will be stopping,” Flavio said.

Will the Fan Club continue to exist?
“We have many ideas to assess with the VR, but one thing is certain…  we will continue. If  there were any doubts, the fans made us think twice. We keep getting emails asking us to continue. In Austria, we had a grandstand for 7,000 people. We also have some excuses not to stop. Vale will continue to race with cars, he’ll have a team in the MotoGP, and all the Academy riders are there. Also, we’ve been organizing initiatives within hospitals for many years. It’s an important part of our activities, and we want to continue. We won’t be retiring,” he said laughing.

Will a new chapter also begin for the Fan Club?
“After twenty-six years,  we were quite  set, but now we have an incentive not to age. We’ll  get back into the game.”

“We have tripled our members, even if Valentino no longer wins, they’re in 88 countries”

How many members are there at the moment?
“Before the pandemic, we had tripled the number of members compared to when Vale won. In 2008, we had 6,000, and we had reached 18,000. Usually, in sports, the less you win the lower they are, but it was the opposite for us. It was a good testimony from the fans who are fond of Valentino and, consequently, his fan club, regardless of the results. We're now at about 15,000.”

Are there also VIPs among them?
“I never go to look, but I remember a letter from Josè Mujica, the former president of Uruguay, who was one of our members and who sent us a letter in which he wrote that he wanted Valentino Rossi to be his son. The incredible thing, more than famous people, is to have members in eight-eight countries around the world. In addition, given the due proportions, Asia has almost more than Europe. After all, at the last Sepang GP, we filled a grandstand with 15,000 people. They’re really attached to Valentino, and now I’m going to brag,” he said laughing. “Even in ours, they invite us everywhere. There’s a friendship relationship, and it’s nice to tell Vale’s story.”

“The Jerez toilet gag was supposed to have a sequel... a diaper for Incontenik” 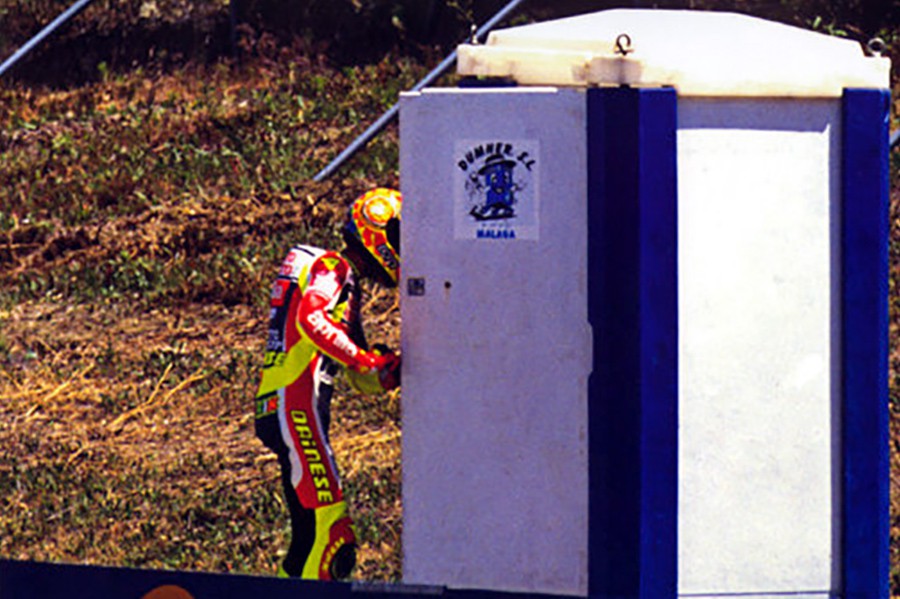 Speaking of stories, what's the best memory you have of all the gags you created over the years?
“The one that amused me the most was the Mugello one in 2002 where Vale was stopped by the cops. His mother also called him asking him if he had really been fined,” he said laughing. “The one that represents Vale in all respects, however, was in Jerez in 1998, when he stopped to pee on the track. Nobody knew anything about it. He thought it up on Saturday racing along the track. And it was supposed to have a sequel.”

Can you unveil it now?
“The gag was so successful that we decided to do it again at the next race, at Paul Ricard. But there was a problem, because Vale couldn’t get off the bike in the lap of honor, otherwise, he would have been fined. He already had to pay six million liras at Jerez. So we took a large diaper, which we would have put over his suit, and on it we would have written, instead of ‘Valentinik’, ‘Incontenik’. Unfortunately, his chain fell off on the last lap, and we weren’t able to do it.”

“We had to remove the Polleria Osvaldo, it overshadowed the real sponsors”

How did all those gags come about?
“We have never taken ourselves seriously, and we still don’t nowadays. Let’s say that we’ve expanded our gags. From Tavullia, we brought them to the track. It was a nice way to celebrate. For example, Polleria Osvaldo was created in 1998, during a time when Vale was not doing well. He had fallen four times. The last was in Donington. He was down, he almost wanted to stop, he had doubts. So, joking with him, we said, ‘Don’t worry, there’s always a sponsor. From chicken to chicken, the Polleria Osvaldo will always be there (ed. ‘polleria’ means ‘poultry shop’ in Italian),” he said laughing. "It eventually became so popular that we had to remove it because it overshadowed the other sponsors.”

All these characters are in Yellow Park, the playground for children that you recently inaugurated in Tavullia.
“Our idea is to bring a traveling one around the world so that everyone can take pictures with the chicken, dwarfs, and so on. Of course, we didn’t add the inflatable doll,” he laughed.

How will you approach Misano race, like a festive event or with a veil of sadness?
“To tell you the truth, I’m so focused on doing everything that I’m not thinking about it. We’re preparing a special thing. Vale is a rider, so we created a ‘chapeau’, a fedora, so that the fans can tip their hats off to him to say farewell. We made eleven thousand.”

Will there also be a final gag?
“We thought about it, but Vale told us that he prefers to say good-bye to all his fans on the circuit, not just those in his grandstand, so he doesn’t want to stop for ten or fifteen minutes for a gag and run out of time. Maybe, from here to Valencia, we’ll reconsider, but I agree with him. If we reached these levels, it was thanks to the spectators and no one else. We've never lost the spirit to create others, but the results haven’t helped us. Yet, Vale decided to continue, and I think he likes it because of this too. His passion comes before everything else. For a nine-time world champion, finishing fifteenth isn’t easy. It takes a lot of desire. Not just for racing but, above all, for training. I think the Academy helped him a lot in this, living together with other riders.”

“We’ll dedicate our time to social issues, we'll take children from the hospitals to Tavullia to experience a day like Vale”

At the beginning, you talked about some ideas for the future. Is there one you’re already working on?
“Yes. The idea is to bring some children who can leave the hospitals to Tavullia and spend a day as if they were Valentino Rossi. We’ll take them to the VR, to eat in our restaurant, to Yellow Park, to the Ranch and, finally, to the Misano circuit with an Academy rider. The project will be called ‘I’m like Vale’, and we’re already preparing it. Then, inside Yellow Park, there’s a small circuit without architectural barriers, and we want to organize a mini-GP for children in wheelchairs, complete with a podium. We believe we’ve received a gift that we shared with everyone. This is perhaps the secret of our enthusiasm after twenty-six years. If we don’t do it, we’ll miss a great opportunity.”

This is the first time there have been two or more rookies on pole position in a single premier class season since 2006 with Dani Pedrosa, Chris...
4 hours 21 min ago