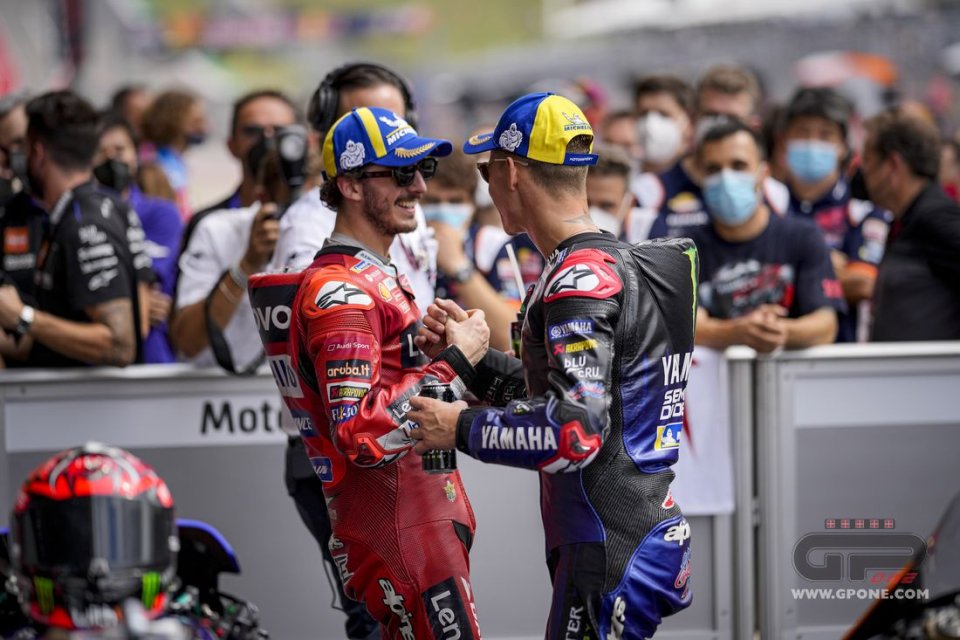 Fabio Quartararo was right when he hailed his second place in Austin as "the best of his career". For the Frenchman, what the most important thing was not that Marquez had won, but that Bagnaia had come home behind him. After Pecco's two successive victories at Aragon and Misano, he had to bring that run to a halt and he succeeded. Now the title is one step away and already in three weeks’ time, once again at Misano, the Yamaha rider could make it his own.

With a 52-point lead and three Grands Prix still to be run (so 75 points up for grabs) the math is on his side.

Let's clear things up immediately and look at his world championship combinations, the Frenchman can become champion in the next GP in Italy if:

- If Quartararo finishes in front of Bagnaia

- If Quartararo is 6th and Bagnaia worse than 4th

- If Quartararo does not score and Bagnaia is 15th or worse

- If Quartararo scores any result with Bagnaia 14th or worse

These are the statistics, which make a comeback not complicated but almost impossible for the Ducati rider. "I am here to make up my disadvantage on Fabio" clarified Pecco, as it should be. For him there would be second place in the standings to defend (with Mir 27 points behind) but this is not the time to think about this sort of thing. Bagnaia also knows, however, that the outcome of the title race is not entirely in his hands. The only way to shorten it would be a zero for Quartararo, but he has never had one in the whole season.

Even so, the road would still be an uphill struggle: assuming a victory for Pecco, Fabio would still have a 27-point advantage to manage in two races. That’s a lot of points.

There’s no point crying over spilled milk and the Italian rider is fully aware of this, as he knows where he lost those points he is missing now. At Mugello with a crash when he was in the lead, in Austria after the restart and at Silverstone, when the tyres were not up to par: with those results the classification would now be very different, but history is not made with ifs and buts and for sure neither are championships won.

"In the end, Quartararo is the one who has the most pressure at the moment, he has to think about the championship, I just have to be more competitive, so I'm calmer" Bagnaia clung to his last hopes after the American race. Were it not for the fact that Fabio understands exactly how to keep his nerves at bay, which he was unable to do last year, and all those points can only make him sleep soundly at night.

The only strategy for Pecco is to attack to keep his hopes alive. The more he leaves the championship open, the more the (very low) odds will increase. In the worst case scenario, there will always be next year for the rematch…