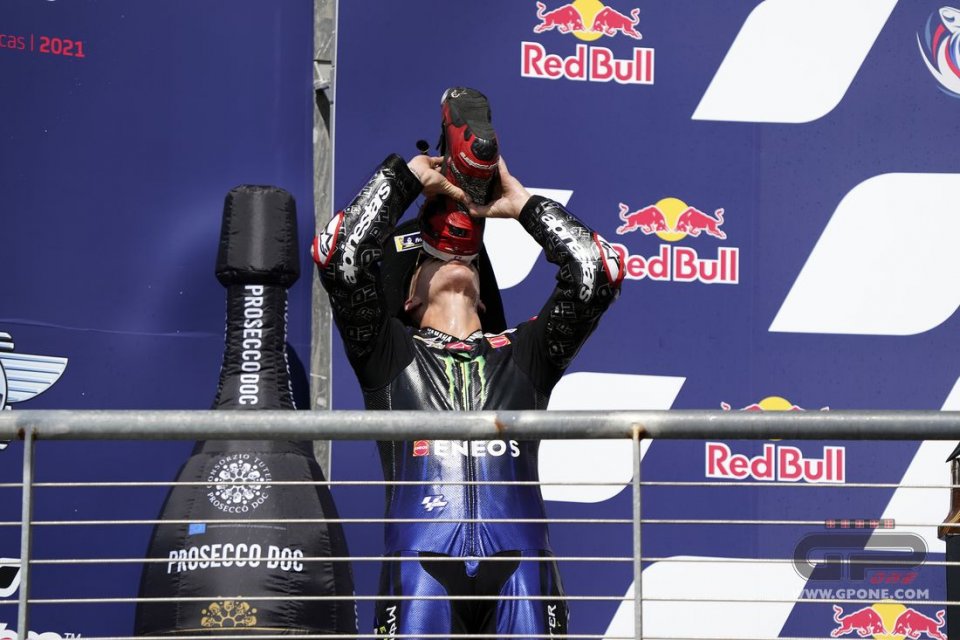 Marquez asserted himself on the circuit in Texas in an almost announced triumph, but there’s someone else who’s rejoicing in a calmer and less evident manner: Fabio Quartararo, world leader. With the second step of the podium, he moves forward towards the title, perhaps for the second to last time. With a considerable advantage in the rankings (now 52 points) over the only rider able to establish his position, the moment of truth has now come for the young French rider, because the finish line for the title is near and will be disputed in Misano in three weeks, on October 24th.

“It was my second best career podium,” Fabio said. “I was really stressed in the morning, but after the first corner, I put everything aside and concentrated only on the race. I’m really satisfied with the result. Our goal was to finish on the podium, and we achieved it.”

Was there a moment during the race when you really thought you would catch up with Marc?
“I tried for the entire race, really!”  He answered with a laugh. “Also because I had the rest of the group behind me. Martin, first of all, so the only option to avoid being overtaken was to push harder than them.”

Was the circuit as demanding as you thought?
“It was definitely a physically demanding race. In the morning, I had done ten laps and I was tired, and I thought that doing twenty in the race would be a nightmare. But, actually, it’s never the same in the race. The adrenaline of the competition makes you forget the fatigue. It’s different than racing in the morning when you know you’re not disputing any podium at the end of the session.”

In the Moto3, there was another a very bad accident. What are your thoughts?
“We’ve had too many accidents this year. It’s true that, in their category, the slipstream is very important. It was certainly a human error, but it’s also true that there’s only one trajectory on the straight, so certain maneuvers should be kept under control.”

Now three weeks separate you from Misano, the circuit that will perhaps decide the championship. Any strategy, or will you face it like you’ve faced the entire season?
“I know I have a good margin in the rankings, but I’ll face Misano like any other race. Besides, Pecco was very strong in the last race on that track, so if I manage to get the title already at Misano, it’ll be fantastic, otherwise, we’ll still have other opportunities.”

If you win it at Misano, will we see you dance?

“I’m not that great at dancing,” the French champion replied jokingly. “But I don’t want to celebrate ahead of time either. When the time comes, the celebrations will come for sure.”

Quartararo: "Battling and winning against Marquez is more enjoyable"