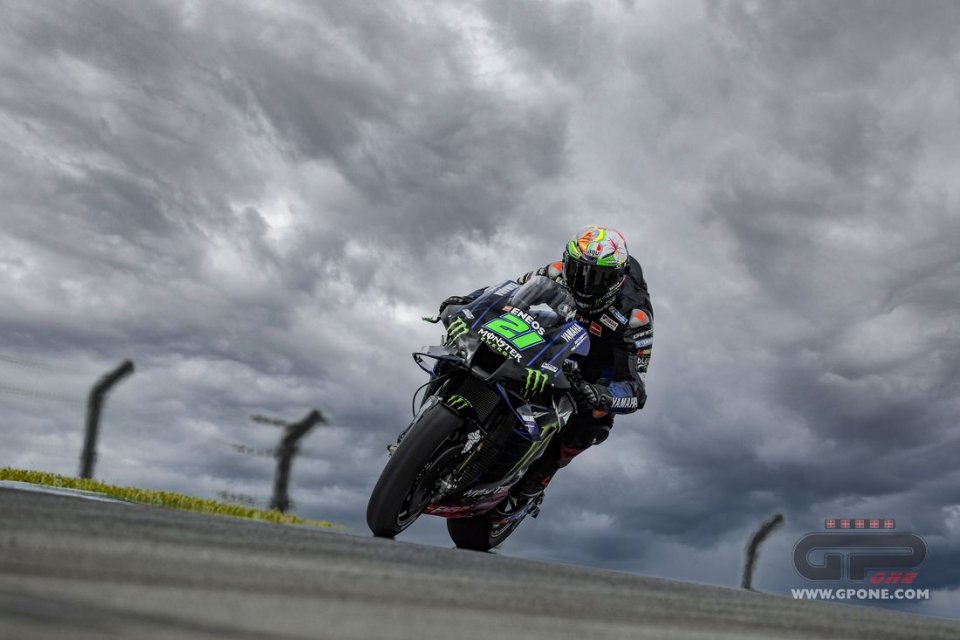 Franco Morbidelli's weekend in Austin ended with a solitary last place, and in the second race since his return to the track, he continues his recovery path in view of 2022. Despite a forgettable result conditioned by his still precarious physical condition, Morbido found some positive aspects from the weekend and is already focussing on Misano 2 to see if there have been any improvements from the race two weeks ago which saw him return after more than two months of absence.

“Unfortunately I managed to do 7-8 laps and then I had to drop my pace a lot, otherwise it wouldn't have been possible for me to finish the race at that pace. I no longer had any strength in my leg, I was no longer able to make the right turns and braking to the left, I only made changes of direction with my arms and without using my legs, things got very difficult on the bumps. It was one of the hardest races of the year for everyone, but it was certainly the hardest race of my life for me due to the physical condition I'm in now - said Morbidelli - It was a great challenge, but overall it was a positive weekend, we improved our speed, our feeling with the bike, I managed to make some steps forward, in free practice we saw that I was further ahead than at Misano and that is positive. Now we have two weeks between here and Misano, I will try to recover and work more. I'm curious to go to Misano again and see some progress, I hope to see it because both in the Misano tests and here we worked well, I think and I hope to see improvements ”.

What do the doctors say about the recovery?

"This is an injury that takes six months to heal, we are definitely speeding up the time, we are now about three months after the operation. We must of course be careful but things are going well. I feel pain but it's manageable even with painkillers. Here I had to slow down but I can manage and do some laps in practice. At Misano, which is a track that has more right-hand corners, I was able to do the whole race with a good pace and in line with the possibilities I had at that moment. Here it did not go the same way because the track is physically demanding, it has many left-hand corners. However, I think that everything we are doing now and the work I am doing with the team is important for next year, for sure, even if I am not thinking about next year now, I am thinking race by race, I am fully involved, I want to improve, do the races and improve the feeling. My condition is not ideal, but it is important for next year ”.

In view of your times, did you come back too soon or were you right to return? In the meantime, Dovi in ​​his second race finished 13th with your Yamaha: as you know his bike, how is he going? Even better than what you expected considering the stop?

“I came back very soon, but it's the right move in my opinion. It was important to get back on the bike as soon as possible, I couldn't afford to stay six months away from the bike, it was something I didn't want to do. For now everything is going well, obviously the results are not good, but at the moment I don't have to pay too much attention to the results because there are so many things that are not at their best right now. I have to try to improve many things and the performance curve will be important and in my opinion it is going upwards, this gives me confidence. In my opinion Dovi went very well, I know the bike he rides and he is going strong, with Ramon he has already managed to find a good setup that allowed him to get into the points in the second race, they are doing an excellent job ”.

They gave Oncu a two-race penalty, is that right or too little?

What do you think of what happened today in Moto3?

Moto3 is already under the magnifying glass, is the decision of the race direction to restart the race with a five-lap sprint in your opinion at the very least questionable seeing as we have been talking about that category for months?

"It is certainly a questionable decision, they probably trusted these guys too much and I don't know if it depends on the generation, the category, the bike they ride, but the result is that the races are very dangerous and they already are when they are 100 km long. If they are shorten them to 25 km it turns them into sprint races and the danger soars. It was a questionable decision ”.