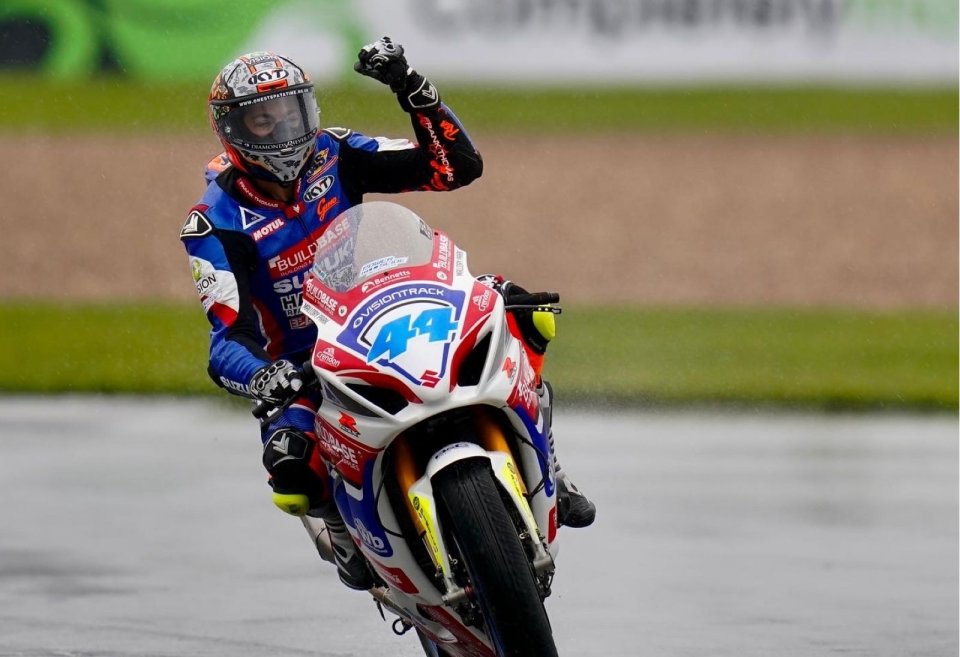 All we needed was the rain to further mess up the cards on the table in Donington Park, and so it was. In fact, a sudden violent downpour hit the East Midlands just before BSB Race 3, forcing the race direction to postpone the start for almost an hour. In very delicate conditions, Gino Rea once again proved his amphibious skills on the Buildbase Suzuki GSX-R 1000. In his second career triumph after the one obtained yesterday, the 2009 European SuperStock 600 Champion held off the initial attacks from Christian Iddon (VisionTrack PBM Ducati), then powered away in the final stages with a string of fast laps in a race that saw the resounding – and forced - retirement of championship leader Tarran Mackenzie.

Shortened for obvious reasons to 15 laps from the 20 originally scheduled, in the third race of the weekend the 32-year-old followed up on Saturday's brilliant performance. Historically a great specialist in the wet (his only Moto2 podium was at Sepang 2012 under a downpour), Gino Rea immediately took control of operations, and that was the situation until the chequered flag, despite Iddon breathing down his neck. It was an authentic solo performancethat gave Stuart Hicken's team an unexpected double and pole positions.

The big surprise, however, was Tarran Mackenzie. The winner of Race 2 had to throw in the towel early: while he was fighting for the podium, on lap 3 the McAMS YZF-R1 literally came to a halt when exiting the Fogarty Esses. For the Scotsman it was a very heavy zero indeed in view of the standings, even if he was able to maintain his leadership thanks to a disappointing eighth position of team mate Jason O'Halloran.

Now the son of Niall will have to manage a 10-point advantage over the Australian, after the results of Race 3 he will now also have to deal with Christian Iddon (-15), second at the finish in front of Lee Jackson, in his first season on the FS-3 Racing Ninja ZX-10RR. Next up is Tommy Bridewell (MotoRapido Ducati) in fourth position, who is 21 points down. With Glenn Irwin (10th after a comeback from the pit lane) and Josh Brookes (crashed) already out of the game and Danny Buchan (retired, on -66) and Peter Hickman (8th, on -68) in with a chance only arithmetically, the three final races at Brands Hatch are shaping up to be a four-way battle for the 2021 BSB Championship title. See you there in a couple of weeks! 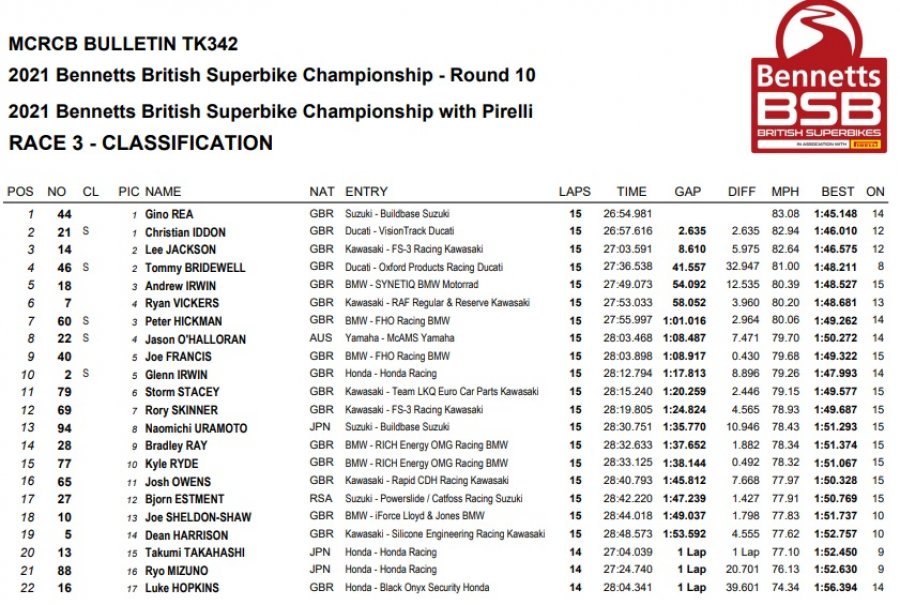 Aleix Espargarò: "It was crazy hot, we'll have to be real athletes...