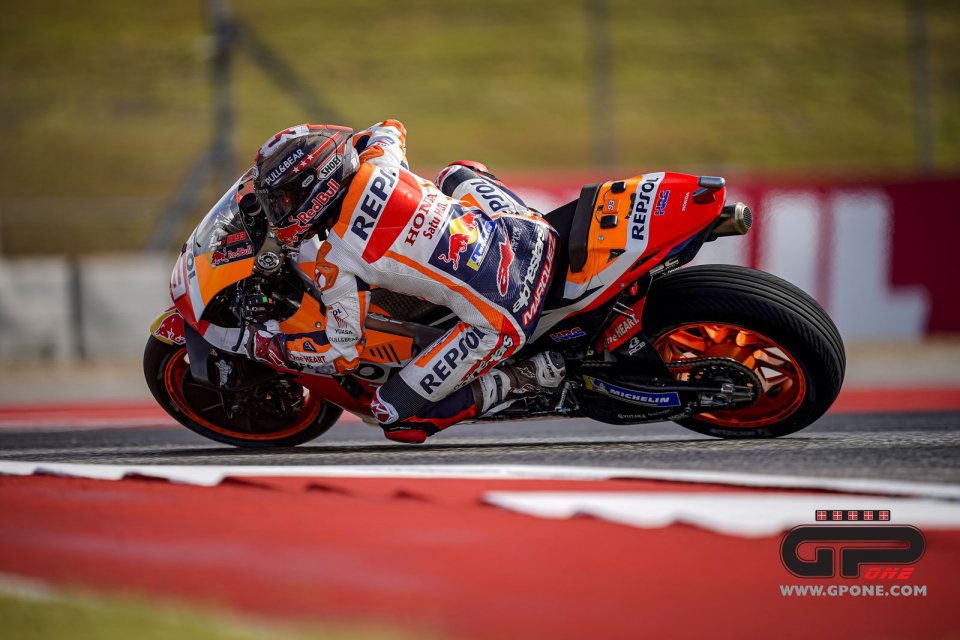 Marc Marquez wasn’t able to get his eighth consecutive pole on the Austin circuit in Texas. Bagnaia snatched it from him, so the eight-time World Champion will start with a third time, also behind Fabio Quartararo. On the other hand, the front row represents another milestone since his return from his injury. In fact, this is not only his front row of the season but it’s 441 days after the last one, in the 2020 Spanish GP.

“I’m happy to be in the front row. Today we were good at managing it,” Marquez explained and added: "But tomorrow we’ll have to manage tires and holes. It should be warmer and, with the increase in temperature, I usually feel better. My pace is good, but there are riders who have a better one, Miller for example. I’m really happy with this front row because qualifying has been one of my weak points this season. With the first tire, I felt good and, with the second, I found some traffic, and I was at the top of the rankings, so there was no reason to push hard. It’s my first front row of the season, which is weird to say, but that’s  how it is! With the used tire, I feel better than with the new one. Our race pace is quite good. We’ll try to make progress in the warm up and continue in this direction.”

Marc seems calm, as if he really didn’t expect to be where he is.

"True. I didn’t expect to be in the front row. The goal, with the team, was to be in the second row, because one of our negative points this year is the fast lap with a new tire. But we managed to do it, and it’s the best result this year. This is also important. I knew that the Ducati, above all, would be very fast. So I was expecting another red bike in the front row and on pole, Miller’s. We’ll see tomorrow. It’s a long race. Many things will have to be managed: one of these is my body and the tires ... .”

What kind of race do you expect?

“In terms of pace, I think we’re pretty good, especially with used tires. When the tire drops, I start to feel good, the bike becomes gentler, softer,  and not so physical. I like it, and it’s from that moment that I ride a little better. We’re on the same level as Jack Miller. I’d say that he’s a bit stronger. Pecco and Fabio will also be fast. They’re playing for the world championship, and I’m sure they’ll find the tenths they’re missing.”

In short, are you able to think about a podium?

“I’m ready for the podium, but to win? It’s very difficult, everything should go well, but a podium would be a good result. A bit like Aragon, the dynamic is almost like that. It’s possible, but difficult. A podium, seeing the season we’re having, would be good.”

What do you think about the Austin track? Everyone complained about all the holes.

“The holes are there, but I can manage them and, if I get a good pace, I can do it. I suffer more in qualifying, and I feel comfortable with used tires.”

Some have noticed that you didn’t look for any slipstream here in qualifying.

“Sometimes, to do my best, I need a  slipstream, but I feel good on this track. If I push the times, they come. if I slow down, I understand why. On this track, I suffer in three corners. I’m doing well in the others. The opposite of what happened to me in Misano, where I did well in three corners and suffered in all the others.”

In case of a victory, you’ll have to eat a donut on the podium.

“That’s the bet I made with Jett Lawrence. But, before I eat the donut, I’ll have to win. He’s already bought it. I’ll eat it if I win, but also if I end up on the podium, because it would still be a good result and, even if I don’t end up there, I’ll eat it anyway, but in Hospitality.”

Marc Marquez, Welcome to Crashland, on track without fear

Puig: “Only Marquez knows what he’s doing, winning at Misano is worth more”