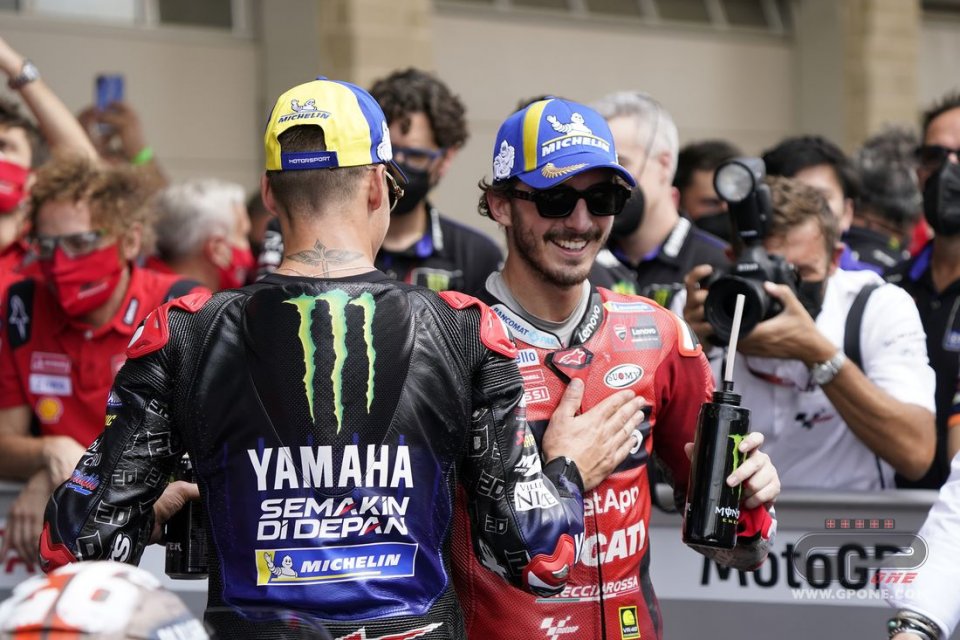 The battle between Bagnaia and Quartararo is one that leaves you breathless, in which the two men are responding blow by blow. With an advantage of 48 points, Fabio might be happy to administer, but he doesn't want to give up. On the other hand, Pecco wants to do everything to put pressure on his opponent. Even today, in Austin, the protagonists were the two of them. For the first time ever Marquez was beaten in qualifying in Texas and Bagnaia is the first Italian rider to set 3 consecutive poles since Valentino.

"This morning I didn't think it was possible, but after FP4 I did - he explained - In that session I had followed Miller and understood how to interpret T1, I started letting the bike follow the dips, returning to the Misano setup, and the feeling improved. I took some risks, but when on my fastest lap I saw that I had an advantage of 2 tenths after the first sector, I just thought about pushing hard”.

While Pecco had started the weekend struggling, Quartararo had been quick right away, even if he wasn't so sure he would have a good qualifying. "I didn't expect the front row or even that Bagnaia would do that time - he admitted - In the first exit I had some problems, but in the second I decided to push, even if I kept a little margin at turn 10".

The Ducati rider won the battle, but the war will be tomorrow and there will be many opponents.

"If I look at the pace of Quartararo, Marquez and Miller, it’s better than mine - he said - But now my feeling with the bike is better, I'm sure Marc will try to get away and the key will be to be consistent, because with these bumps the bike always behaves differently. In any case, I want to fight to stay in front ”.

After all, Bagnaia has nothing to lose given the gap, while a mistake would penalize Fabio, who however has learned to keep his nerve.

“I can't say I feel the pressure - said the Yamaha rider - From Aragon onwards Pecco has done a perfect job, always on pole and two wins, but I also feel good in Austin. At Misano I was a little more nervous than usual, it's normal when the final finish line approaches, but as soon as the race started I forgot everything. "

So everything is ready for another challenge on a track that will put a strain on mind and body and in which it will be very difficult to overtake with all these bumps, as every rider has said.

Ducati’s Italian rider will go on the attack and has already received the compliments of his teacher Valentino, who said he hasn’t seen anyone ride the Ducati like Pecco for a long time.

"When I started in MotoGP I always crashed, I tried to push but my riding style didn't suit the Ducati - recalled Pecco - In the first test I was fast only because no one had done a flying lap, but from the first race in Qatar the problems started. Also last year I only did 2 or 3 good races, then I changed my mentality. On the one hand I adapted my style to the Ducati to be able to brake hard, on the other the bike to me to have more speed in the corners. "

It worked and he is now ready for another challenge with Quartararo.