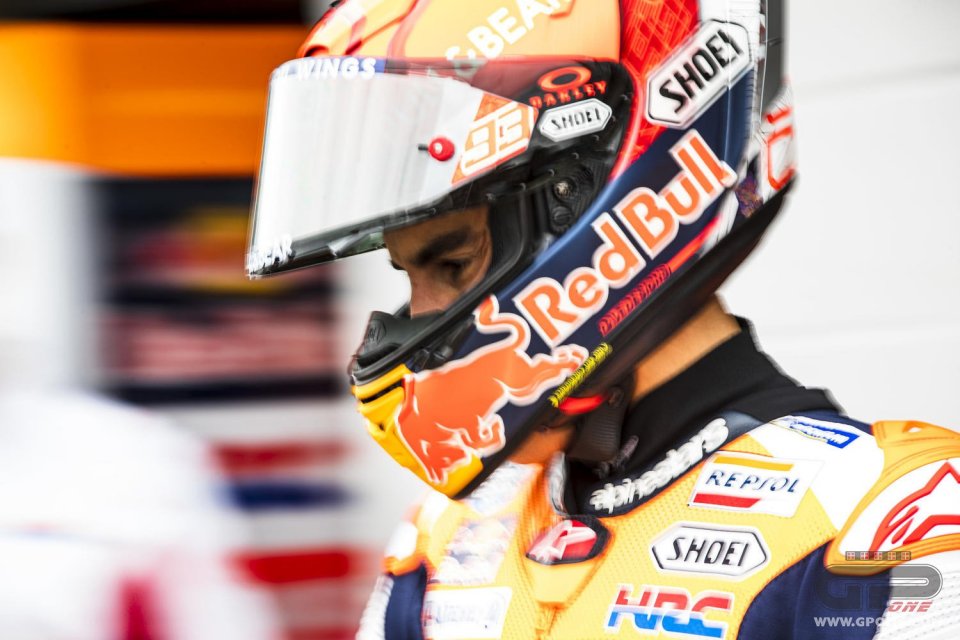 When at the end of the first free practice session in Austin, observers pointed to the rain as the main reason for Marc Marquez's supremacy, they were making a huge mistake. Marc himself proved to everyone how wrong that consideration was, finishing Friday in front of the rest and proving to be the best even on a dry track in FP2.

The completely natural way in which Marquez interprets the American track has allowed him once again to put everyone else behind him, despite now well-known arm and shoulder limitations continuing to undermine his performance. A Honda that also looked particularly at ease on such a ruined track surface as the one seen today has perhaps given the extra push to a Marc who is still trying to get back to being the man to beat in MotoGP, a role he lost in the Jerez accident and the long series of errors that followed. Today, however, Marc looked happy in the meeting with journalists at the end of the day, confirming the approach already announced at the press conference. Here he wants to have fun, well aware that at other tracks he will struggle.

"Honestly, the feeling on the bike was not so good. Then when I stopped in the box I saw I was in front - explained Marc - From my feeling on the bike, I'd say 'I'm not riding well'. But then I stopped in the box and saw I was on top. It's strange. I'm happy for the result but not the performance and feeling. I mean the feeling is not the best. One of my strong points was T1 in the past and now I'm losing a lot there. Especially Turns 3-4-5 I cannot change direction, I'm in delay. But still the lap time arrived. I hope tomorrow it will rain a bit more in some practices because like this I will survive the whole weekend better!"

From the outside, it makes an impression to see how much the bikes are moving around. Are bumps an extra problem for your body?

"It's a circuit that I love and a layout I like, but the bumps are in the limit, I mean the condition of the surface is in the limit, because they are not real bumps, it's more like the surface is moving. It's so difficult. Apart from that it's true that it's a physical track and even when you are fit it difficult to finish the race in a good way. But it's also true that the back straight helps a lot now because you can relax a bit, because they resurfaced there and it's not bumpy. I will try to maintain my level and also improve, because I know that others will do it. I would like to stay at these levels also tomorrow and especially Sunday ".

Some riders such as Mir and Quartararo have said that without intervening, it will be impossible to race here next year.

"Of course now the level of the tracks in the MotoGP World Championship is really high and the surface is always really nice. But I remember Laguna Seca 2013 also was really bumpy. Indianapolis also was some bumps then they resurfaced and it was much better, but for some years it was bumpy like here. But it's true and I agree it's in the limit. Every year it is getting worse and worse. They need to understand why but it's difficult to fix the problem because for me it's not like bumps from the asphalt, it's bumps from the ground. Maybe the ground is moving because of the storms, I don’t know why, but it's moving and you need to adapt some of your lines. In these conditions it is also difficult to find the race pace, because the situation changes constantly. It will be difficult to be constant in the race, twenty laps will be tough ".

But would you say that Austin is dangerous?

"I wouldn't say it's a dangerous track, because it's just a matter of figuring out how to ride in these conditions. For me, dangerous tracks are those with walls close to the track, with few run-off areas. Obviously all riders would always want perfect asphalt, where you can enjoy riding to the limit, also because in this way it is possible to put on a show. But for me other tracks are dangerous".

"There is not much grip here and when this is the situation, our bike works quite well. It is certainly a good sign even though a flying lap is one thing, while race pace is another. Maybe on this one track all the Honda riders will be there to fight for a good result. "

It has been pointed out to us that your Alpinestars suit does not look symmetrical on the shoulders.

"Yes, it's true, I had it changed on the right shoulder because in the left-hand curves I move my shoulder in one way and in the right-hand ones in another way and it bothered me. Now it is wider in that area, so I make less effort. "

Zarco: " Marquez would win here in Austin even with just one eye!"