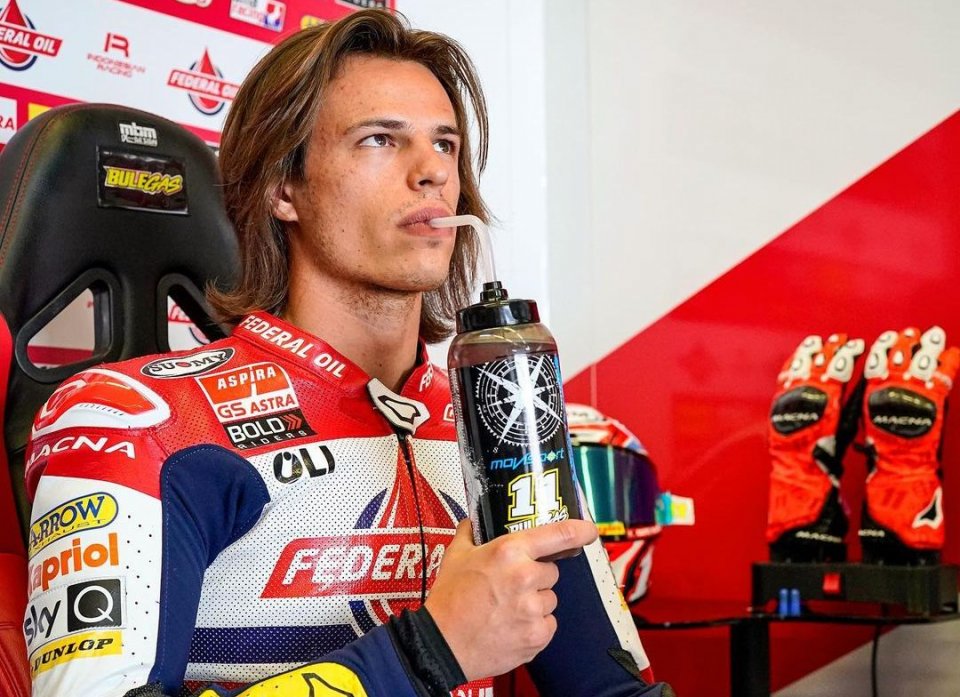 His future has already been written! We’re talking about Nicolò Bulega, who’s ready to say farewell to the MotoGP paddock at the end of the year, after six seasons. First the Moto3, then the Moto2, and soon the SuperSport. Aruba has, in fact, decided to focus on him in view of the new category, and the rider from Montecchio Emilia has decided to take advantage of it.

A significant change for someone who had been given a ton of responsibilities, to the point that they thought he’d become Valentino Rossi’s heir. But the past is now behind him. All that remains is to end his experience with Gresini in the best way possible way and then start a new chapter in his racing career.

“It’s strange but, as you know by now, I’ll be starting a new endeavor in 2022,” Nicolò stated. “I thank Aruba, who took me into consideration for the SuperSport and, on my part, there’s great enthusiasm and motivation to start this new adventure. I’m sorry to leave the MotoGP paddock, but this was a great opportunity, and I accepted.”

How did this negotiation start?
“My manager, Alberto Martinelli, started talking to me about it just before the Aragon race. I didn’t have great alternatives in the Moto2. Ducati with Aruba intrigued me, so I took advantage of it. It’ll be a completely new experience, but I’m excited.”

There are already rumors that it’ll be like taking a step backwards.
“I know. I’ve read several comments about it, but  I don’t consider it a step backwards. It’s a new opportunity for growth. Look at Locatelli, for example. He went to the SSP, and he’s now an official SBK rider. I think he made the right choice for his career.”

Let’s backtrack. At the beginning, in the Moto3, there was great expectation from you. What went wrong?

“I was sixteen, they psyched up, but I didn’t want that. From the outside, I might seem cocky, but that’s not how it is. If you ask my friends, I’m a guy who doesn’t overstep boundaries, at first, with those I don’t know. In fact, I try to keep to myself and be reserved, Then, when I feel like I can trust someone, I open up. I feel bad when I hear that someone thinks I’m cocky, because that’s not the case. Among other things, when the news of the SSP came out, I can’t deny that I felt bad for a while when I read comments where I was offended, discredited, and muddied. But, in the end, that’s what happens on social media networks, since even champions like Hamilton, Marquez, Rossi, and Verstappen are subject to constant criticism.”

You were even referred to as Rossi’s heir.
“Like I said, I was pumped up and, at sixteen, I didn’t want all that, but not even now. Look at what’s happening to Pedro Acosta. After a few races, they started to do the same and, the more you go forward, the more complicated it becomes to go back. Personally, I can only wish him the best and to accomplish all his desires in the racing world.”

Back to the present: Now you’re off to Austin and, in a few months, your debut in the SSP.
“I honestly don’t know when I’ll do the first test with the Ducati V2. But I’m curious to try it and see it at work. Besides a friend’s Hypermotard, I’ve never ridden a Ducati before in my life. Like I said, I’m curious to ride it, understand its potential and, at the same time, what it means to work in a team considered a Factory team.”

Will you go to the SSP with the same mentality or will you start from scratch?
“I think there will be an involuntary reset inside of me the moment I start racing in the SSP. It’ll be a completely new world for me, but I’m confident of being able to express my potential and reap what I wasn’t capable of reaping in the World Championship.”

Do you consider it your last big chance?
“No, it won’t be my last chance, also because I’m only twenty-one, and I don’t think I’m old.”

A few years ago, you left the VR46. How much has your life changed?
“My life continued normally, since I continued to ride motorcycles. With all the guys from the VR46, like Uccio and Vale, I’m still on excellent terms today. The only difference is that our paths have separated.”