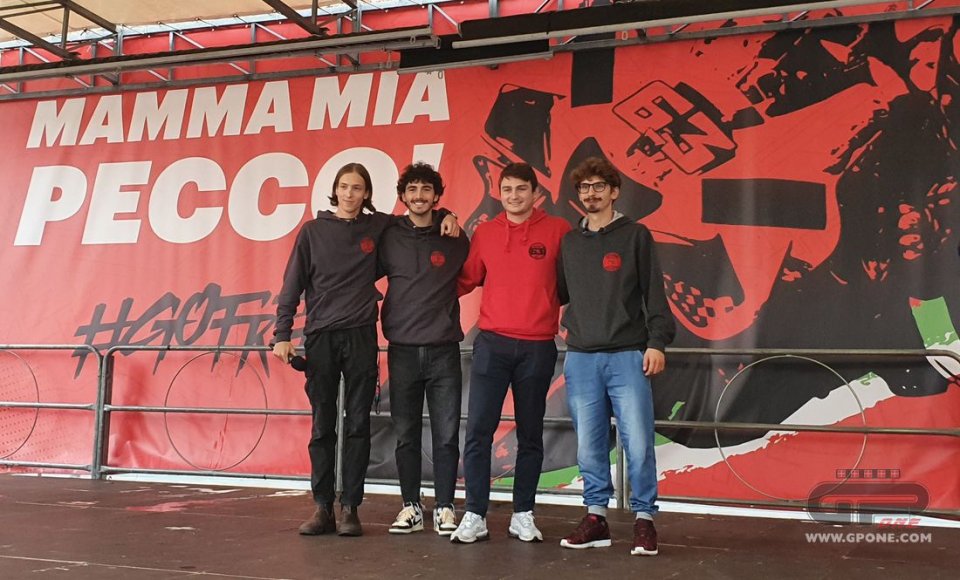 They call it the Red Cloud, they are the fans of Bagnaia who want to increase in number to fill the sky of the world championship. The centre of their world is Chivasso, a town a few kilometres from Turin, where Pecco was born and which yesterday presented him with the Nocciolino d'Tola award inspired by a typical dessert of the area, given to those who have helped spread the name of Chivasso.

Among the streets of the town centre posters of their local hero are in every window and, in amongst the stalls of typical products, there is also that of the Fan Club. Memberships are increasing rapidly, "we are already over 600, but we are aiming for 2 thousand" joked the friends of Pecco and his first fans. For the second race at Misano they have also organized a grandstand to cheer him on.

That’s not all: yesterday a banner was also unveiled with the image of Bagnaia and the words 'Mamma mia Pecco! " which will be put on display in the square.

"At Misano I had found all my friends with flags outside the restaurant in the evening, it was a surprise - Bagnaia revealed - I have to thank them because they always made me keep my feet on the ground, as my parents had taught me" .

For Pecco it is a magical moment, two MotoGP victories and the recognition of an entire city, where he was the guest of honour of the party together with fellow citizen Simona Ventura.

"It is a great moment, I am very happy because this year I had gone through a complicated period - he said - I had a good start then there were complications during the season, some problems caused by me and others not, I had some highs and lows . However, from the moment we managed to get it all right, we took home two victories in a row. For me it is the culmination of a dream, but I am just at the beginning and we will have to continue like this ".

And try to complete a very difficult, if not impossible, undertaking: bridging the 48 points gap that separate him in the standings from Quartararo in just four races.

“I'm racing against a very strong opponent - he admitted - I can only stay in front of him and it won't be easy, but it doesn’t only depend on me, Fabio should make a mistake. But I hope it doesn't happen, I'd like to win like I did at Misano, fighting against him, because it would have more value”.

The next challenge will be in Texas…

“Austin is a track that I like, very technical and difficult. I can't wait to be there, I think this away race can go very well. "

Many people see him as Rossi's heir…

"Lately I have often been asked this question and I always answer that replacing Valentino is impossible for what he has done and for what he has been and still is - he declared - For motorcycle racing it is something that can’t be repeated, he has brought together many fans and he has always been good at conveying his passion for motorcycle racing to his audience. This is something I'd like to imitate, to be able to excite people ”.

In a moment of celebration, Bagnaia wanted to remember Dean Berta Vinales, who lost his life on Saturday in Jerez.

"It's a tragedy, you can't say much when things like this happen, you become very small in the face of such a great tragedy – were his words - When you race you accept the risk, there are things that cannot be avoided but you hope that nothing will happen as much as possible and this year there are already three very young riders who have left us, this affects us all ”.

Honda: leaving and winning in Formula 1, staying and losing in MotoGP