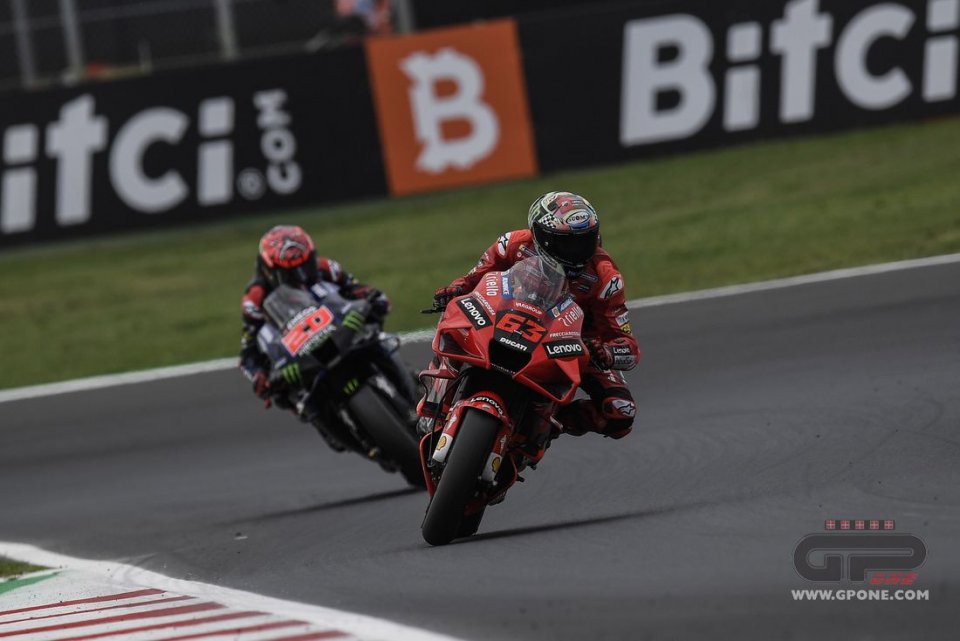 They say that it’s a long way to the top if you want to rock n’ roll, for some more than others. In sport - and motorcycling is no exception - the results are always seen at the end of the day and there are three riders who hope to be able to overturn a situation that in some cases seems desperate. It happens to be the winners of the last two GPs: Bagnaia, Fernandez and Foggia, all three who scored back-to-back wins at Aragon and Misano, all three second in the championship in their respective classes.

With four races left to the end of the championship, Pecco is in the most difficult situation. With a 48-point lead, Quartararo could afford to 'settle’ for the lowest step of the podium in every GP even if the Ducati rider wins them. Bagnaia knows it well: "it's not all down to me, Fabio would have to make a mistake" he explained his situation. However, this year, the Frenchman has never made a mistake in the race, on the contrary he is the only rider who has never not scored points at the finish line. He has only failed to make the podium 5 times in 14 races: in Qatar, in Jerez (for his compartment syndrome problem), in Barcelona (for the problem with his leathers), in the second GP at the Red Bull Ring (with the flag-to-flag), in Aragon (due to a tyre pressure problem).

So Bagnaia must win, and hope. For some ‘gate-crasher’ to get between him and Quartararo (i.e. Marquez or the Suzuki riders) or in his brand mates. The problem, however, is that the other Ducati riders have not managed to finish ahead of Quartararo many times. Miller did it only four times, the same as Zarco who at this moment seems to have vanished after the good first half of the season (also with his arm problems). Martin and Bastianini are improving, but both are rookies, with all the limitations of the case. So Pecco finds himself alone, with luck as his only possible ally, if he decides to analyse things from his point of view.

Of the three, the one with the most chance of bridging the gap is Raul, for the simple fact that he has the smallest one: 34 points. On the other hand, however, there is a Gardner who, like Quartararo, has not even scored a zero in the standings, unlike the two of his teammate. Remy knows how to use his head and has also shown it in the last two races, with as many second places that are worth their weight in gold for the championship.

Moto2, however, has a lot of riders capable of getting in between the two contenders, becoming involuntary tiebreakers. Bezzecchi, Lowes, Di Giannantonio have already won this year, Canet came close, Augusto Fernandez has been on the podium, so the variables are greater than in MotoGP and this is undoubtedly, on paper, the most open championship.

Moving on to Moto3, however, the predictions become a bit more complicated. In terms of mathematics, the situation for Foggia is similar to that of Bagnaia: 42 points are a difficult gap to bridge, but rookie Acosta is not exactly a paragon of consistency and in fact has been on the podium 6 times, 5 of which by winning. Dennis, on the other hand, from Mugello onwards has been a steamroller: with 4 wins and 7 podiums in 9 races.

There is no point now in regretting the zeros of the beginning of the year, even the Leopard rider (like Pecco) just has to think about continuing in this way, aware that Moto3 is the realm of uncertainty. In every GP there could be many surprises and in group races errors and problems are always around the corner. Not to mention that Garcia has the same points as Dennis, so the World Championship battle is between three riders.

For the pursuers, the only rule is to arrive at the front without making a mistake, something that is easy to say and yet difficult to do. After the Austin GP we will find out if they can still continue to have hopes...