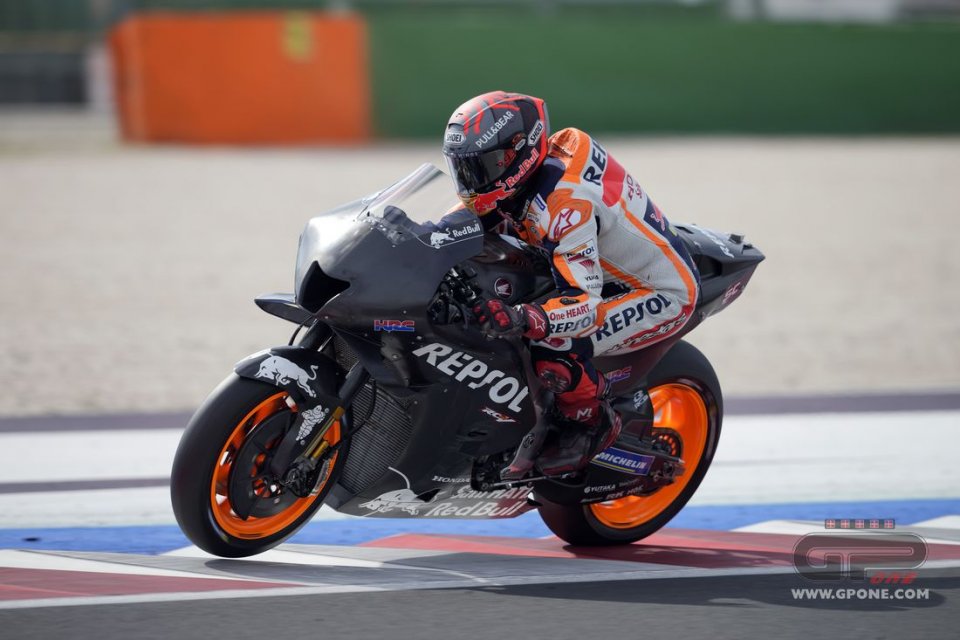 HRC’s work with a view towards 2022 continued today in Misano. Yesterday, Marc Márquez initially worked with a prototype in the 2022 version of the RC213V, moving on to the 2021 in the afternoon to continued with development work. Márquez closed his second test day with a 1’32”151 set in the afternoon, half a second off the top of the rankings.

“Yesterday we focused all day on the prototype bike, as well as this morning, while we worked more on this year’s bike in the early part of the afternoon. We tried things on the frame and worked on other ideas,” Márquez explained. “We’re happy. It’s true that everyone says this during tests, because there’s a lot of grip on the track, and everyone is fast, but we’ve worked on interesting things in these two days. Compared to the race weekend, it changes a lot in the tests, both in terms of risks and in the way we ride. There’s a lot of grip, and you can open the throttle a lot. But, besides that, I felt good on the bike. The most important thing is that we managed to work for the future. We’re happy with what we’ve done. The general concept of the new bike is good. Now let’s go to Austin.”

Better than Márquez in the standings is Pol Espargaró, who finished sixth with a 1’31”926  at the end of the day. He took turns driving the bikes at his disposal to understand both the behavior of the 2021 bike and to direct Honda’s work in view of the coming months. “As it often occurs during tests, there are several ups and downs. In the end, we improved our strong points, and I think a we did a good job,” Pol commented. “The bike looks good, but we still have to work to grow even more. There’s still some time available. There’s room for improvement for an excellent package. Just yesterday we started focusing on 2022, trying to be more effective with the Honda in corners. Like I said, development isn’t easy, since there are positives and negatives. This is a completely new bike. It’ll  take some time to develop, but the feelings experienced are positive.”