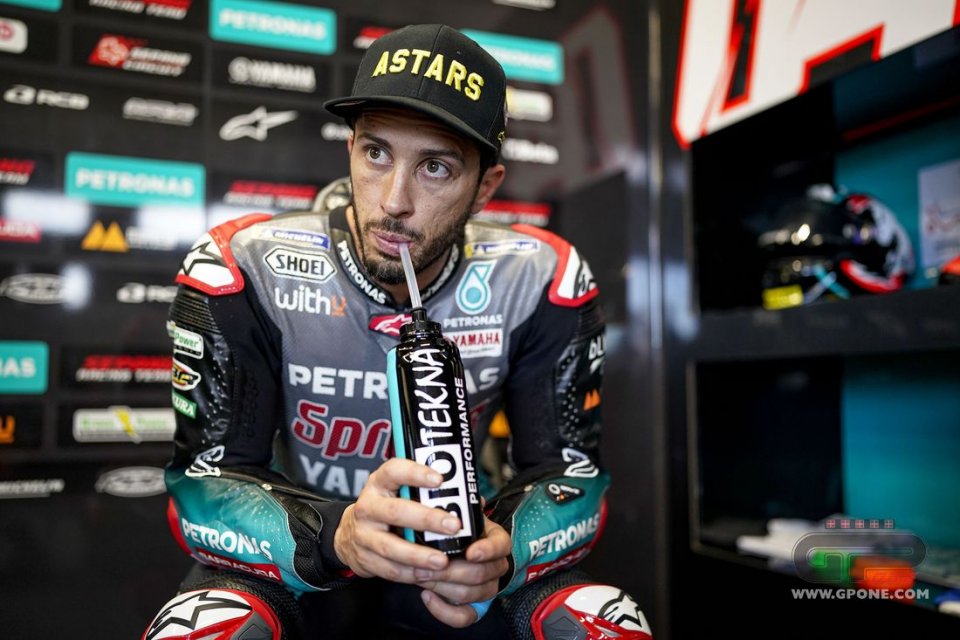 Nobody more than Andrea Dovizioso needed two days of testing. The rider from Forlì had agreed to make his debut in the dark on the Petronas team's Yamaha in the Misano GP and in a race weekend he didn’t have much time to get to know the M1. At the end of the tests, he was satisfied.

“They were two very important and positive days, in which I was able to do many kilometres - he explained - I tried different setups and parts, it was important for me to understand the bike and how it reacts, and in the end, it went very well. Lap after lap, and especially today following Quartararo, I realized that I have to redesign all my trajectories, I have to change my approach to each circuit. It's good to know, because that way you know where to work and it will take time. Riding the Yamaha instinctively doesn't work, but fortunately this year I have 4 races and more tests left. "

Right now Dovi knows he has to work more on himself than on the bike.

“I have to adapt and I am succeeding - he continued - I am still behind in the timesheets, but not last anymore and I can keep an acceptable pace. The goal was to have the speed of the group and then start working on the details ".

It is a process that will take time and it is not yet possible to draw conclusions.

“Certain aspects we will see later - he observed - It is difficult to explain but having been out of action for 10 months counts a lot when you push yourself to the limit to do certain performances. When you are a MotoGP rider, by dint of lapping you acquire certain things that you don't even notice anymore. It is true that I did some tests with Aprilia, but in a Grand Prix everything is different. This is why my goal was to align with the group, not the fastest, I did it and that was not necessarily the case on a bike that I didn't know and which must be ridden differently from the Ducati. "

However, the Yamaha is said to be the easiest of the lot to ride…

"I will understand this later - said Dovi - What it has allowed me to do this weekend is already a lot of stuff and I have good sensations from the chassis, but it is only part of the whole package. To understand any limits I have to go faster than I am doing now ”.

The next race will be in Austin, expectations?

“For me it's all new, I have to work in many areas and I really don't know what to expect - Andrea replied - It's a very demanding circuit, with many bumps and it will be hot. I think its design is good for the Yamaha, but I don't yet have the experience to know for sure. "