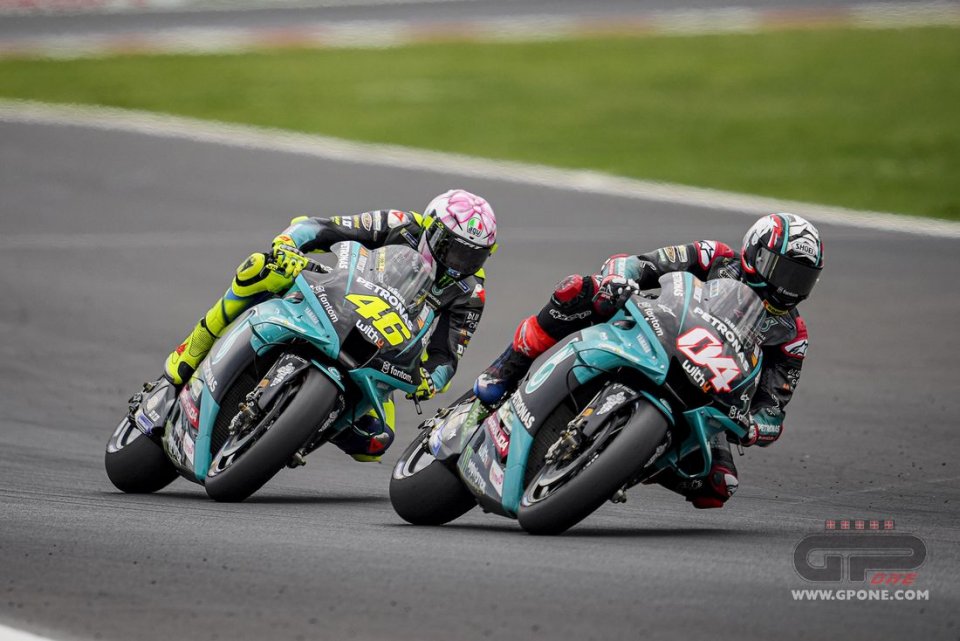 Rossi and Dovizioso took part in this day of testing with different objectives. For Valentino, the important thing was to understand what went wrong in the last GP and prepare as well as possible for the return to Misano at the end of October. For Andrea, on the other hand, this was the first opportunity to get to know the Yamaha without the stress of the race and with a lot of time available. Both seem to have achieved their goal.

“It was a good day, in the end I was fast enough and I managed to ride better than at the weekend, especially in braking and corner entry – said the Doctor, who was eleventh quickest - My time was not bad. I didn't have much to test, but we tried to work on what we have and on the bike balance ”.

Valentino was originally expected to test only today, but plans have changed.

“I will do the tests tomorrow as well, like today I will try to improve the setting of the M1 and I will have some little things to test, like a new tyre for Michelin”.

While Valentino was satisfied, Dovi is decidedly cheerful and not for having lapped faster than in qualifying, reducing his gap from the top.

“It was the classic day after the race, in which the track is in better conditions and everyone is fast - he explained - My sensations have improved a lot, I can be more aggressive, I feel the bike better and especially it is very nice when you perceive that there is margin. Now I have good confidence in the entry and mid-corner, I improved the braking and got used to the Michelin tyres. It is one thing to adapt my style to the Yamaha, but the tyres are always important ”.

And last year he had struggled with the new rear tyre…

"Even with a completely different bike, I have the same feelings - he said - For this I have to change my way of riding, the use of the rear brake, there is something to change to use the potential of the tyres".

He seems to be on the right road …

“I still don't feel completely comfortable, but it's nice to feel better day after day and not uncomfortable,” he concluded.