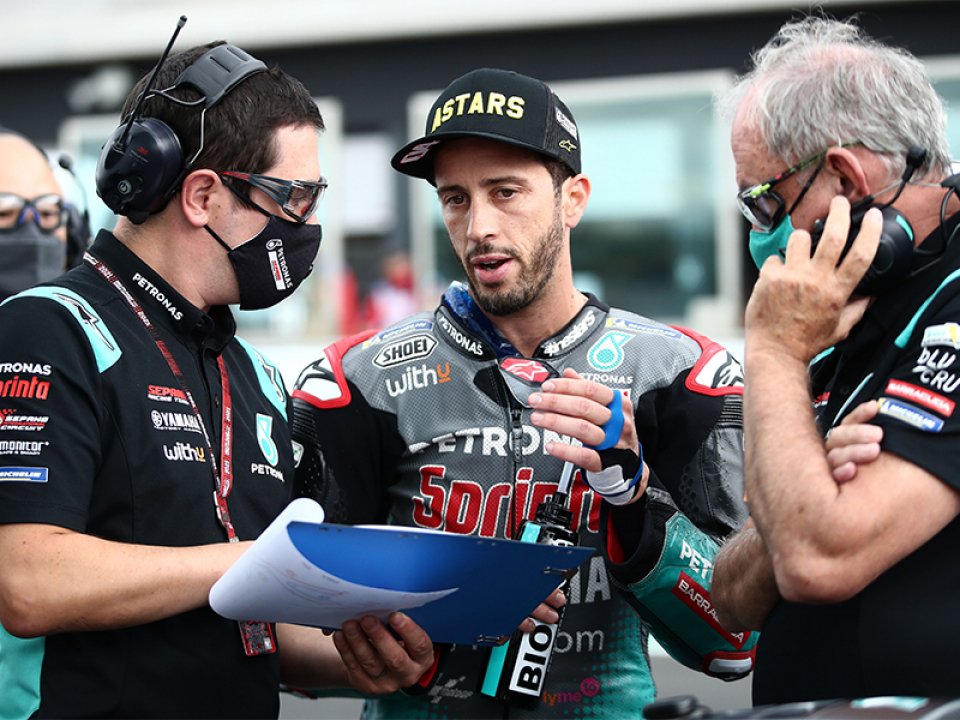 Andrea Dovizioso's return to a race weekend ended with a 21st place. It was a normal race where Dovi was able to accumulate experience riding the M1 of the Petronas team, also managing to stay in contact with the group until a long lap penalty in the middle of the race, due to having exceeded the track limits on several occasions, moved him away from the riders in front. Dovizioso, however, found many positive aspects, also in view of the tests that will take place on Tuesday and Wednesday, again in Misano.

"More than the race, we need to talk about the weekend: we gathered a lot of information and it went well, because we had the opportunity to ride a lot in the dry and we also lapped in the wet and for both me and Yamaha it was important to understand - Dovi explained - The race was good for learning and getting feedback. Before the race I didn't have the speed to stay with the group, I was at least half a second behind, while in the race I stayed with the others and after making a mistake and the long lap my pace improved a lot. I could be much faster than in practice and I did my fastest lap with two laps to go. As the feeling with the bike changed in the race, I tried a lot of things and I have good feelings in some areas. Now I have to put it all together, I tried to explain everything to the team today in the best possible way and they now have to help me put it all together. In free practice I struggled under braking while in the final part of the race it went much better and we need to understand why and what we have to do. Then we will go to work more on the centre of the corner, on corner exit and on the potential of the bike ".

In the race, did you manage to understand why all the riders who got on this bike in 2021 really struggled so much?

“No, I think it's normal. I don't know how much the difference is compared to the factory bike and what exactly the difference is. Apart from this, only Fabio is doing something special and I am not in a position to understand and analyze all this. The bike is special and has many advantages, but it must be ridden in a special way and it takes time to adapt and understand everything. The question mark I had before the weekend, relating to the rear tyre introduced last year, I still have it because it is a bit strange both under braking and how the bike improved at the end of the race. That's why it will be important to analyze and understand if the cause is me or the bike or what has changed in the racing bike. For me it's all new, I have a lot of feedback but I can't know why a lot of things happened. In the race there were many moments in which I had good sensations and I felt the strengths of the bike, even if I was unable to exploit its potential. It is important, after spending 10 months without racing, to do a race so consistently and being able to be quick in the final stages makes me happy, it is the best way to prepare for the test. If the weather is good, doing a test after the race is the best thing there can be ”.

You said that the bike is special, can you explain this more specifically? You said there are some things about the bike that are different than what you were used to, can you tell us more? And will this be the team you will race with next year?

"This is the team I will be racing with next year on a factory bike. About the bike I would say it's easy, you all see how Fabio is riding, you need to brake very deep and bring a lot of speed into the corners, it's the only way to exploit the potential of the bike because it's the bike itself that asks for it. It's a special thing, not all MotoGP bikes require this type of riding, maybe the Suzuki but the others don't ”.

You have a lot of experience with other manufacturers, do you think this can help you adapt faster to the Yamaha? Do you think that even lapping at Misano, first in the race and then in the tests, could be useful in the process of adapting to the bike, allowing you to do it more quickly?

"For sure doing a test after the race is the best thing for everyone, both when there are new things to try and, as in my case at the moment, when there are no things to try but you need to adapt to the bike because its potential is greater than what we have seen. Tomorrow I can recover my energy and then lap for two days if the weather is nice. I think that, in the process of adapting to the bike, a lot has to come from the rider, certainly the team makes a difference because it takes a lot of help from the team to analyze and to be focused on the things that are needed, but when the change that must be made is great, like what I have to do, a lot has to come from the rider. If I succeed, I will be able to tell you at the end of 2022, but for sure a large percentage must come from me ”.

Morbidelli came back from an injury and has changed bikes, you have already explained your current situation, Valentino is not at the best moment of his career and, if we also look at the other Yamaha riders, including Crutchlow and the rookies, everyone, apart from Fabio, seems to be struggling. In your opinion, is there a problem with the bike that Quartararo masks?

“I can't know in detail but every time, the strongest rider of each brand masks a lot, always. How much depends on who and how, every year. Fabio is undoubtedly doing something special. I have a hard time answering how much the bike may not be in shape about certain things or why Fabio is the only one this year, because in 2020 Morbidelli came in front, and he managed to figure out how to get the best out of the bike, I can't know now because I'm the first not to get the best out of it. It’s too early to talk about this”.