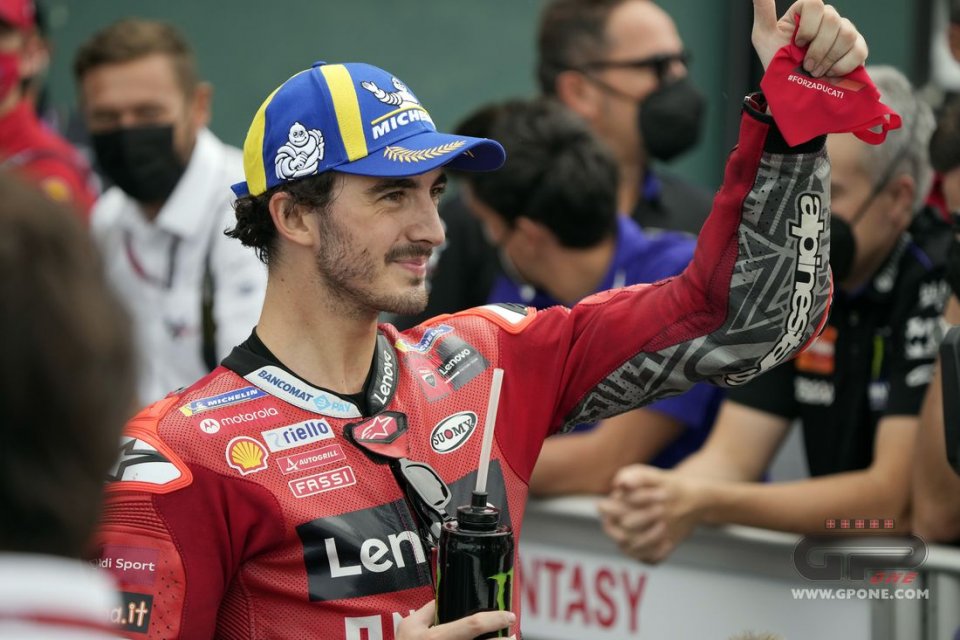 Fans have filled the Misano circuit (as much as possible, due to Covid restrictions) since the morning. As always, there’s a lot of yellow in the stands, and it couldn’t be otherwise, because this is Valentino’s second to last appearance on the home circuit. But if the Doctor didn’t offer much in qualifying, Pecco Bagnaia could instead be the rider destined to fill the void left next year by his mentor. His second consecutive pole position (complete with track record), after the one in Aragon, could seal it for the Ducati rider from Piedmont.

“Repeating what Valentino has done in his career is impossible,” Pecco said. “But, like him, I’d like to be able to share his passion for motorcycling. It’s very difficult to match his results but, one day, I’d like to have my own “yellow people”, like what he calls his fans. It’s great to see the stands full of his fans.”

With certain results, you’ll have them...
“A week ago, I was in Aragon, and I had some wonderful sensations. Today, it’s the same. I immediately felt really comfortable with the bike. Everything was always okay. Even when it was  wet, I did great, without struggling at the beginning, like last time. I’m ready for both conditions and for a great fight.”

There’s a chance of rain tomorrow. Would you prefer that?
“No, because it’s easier to make mistakes, especially on a track like this one that doesn’t have great grip when wet. I know it would be a chance to reduce the distance in the rankings from Quartararo, but I’m fifty-three points behind. That’s a lot. And I have to keep decreasing them. I think I can have a good battle with him tomorrow, but Miller and Rins have a good pace too.”

How much does last Sunday’s victory weigh on this weekend?
“The motivation is definitely higher, and racing in the home GP is always special, so it’s the combination of the two that helped me. I’ve also ridden a lot here this year with the Panigale and have always enjoyed it. This was one of the worst circuits for me but, after training a lot, it became one of my favorites. I like it because it’s very technical, and I was able to arrive here ready to be very fast. I’m really focused, and I want to try to entertain the spectators tomorrow.”

No doubts at all? Not even for the tires?
“Last year, I had used the soft for the rear, and it worked well. It does even now, but also the medium. It’ll be difficult to figure out which one to choose.”