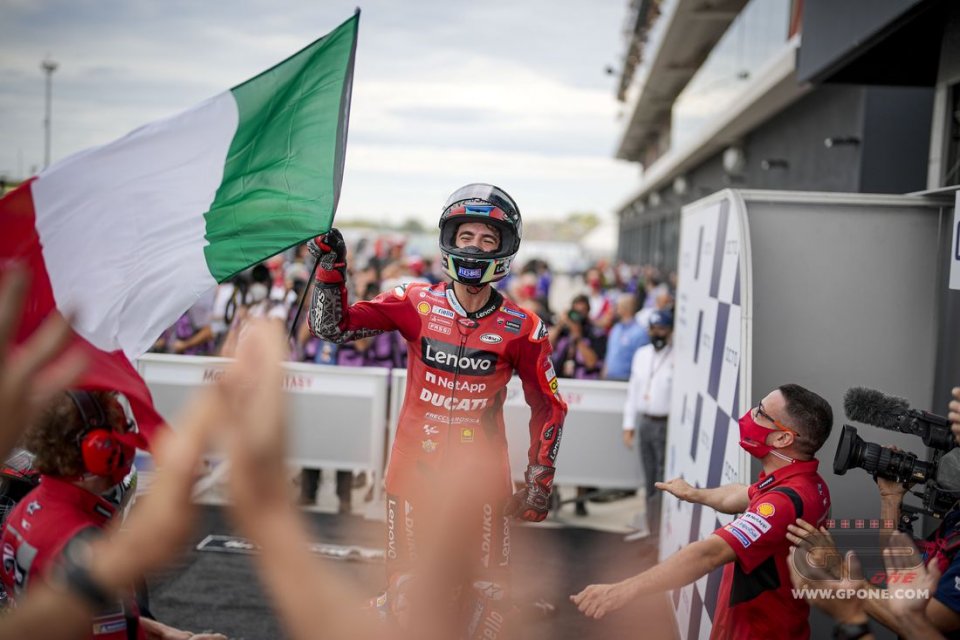 Bagnaia doesn't seem to like easy things, let alone easy victories. While at Aragon he had to contend with Marquez from start to finish, at Misano he had to hold back Quartararo who was getting closer and closer from the middle of the race onwards. While in Spain everything was resolved in hand-to-hand combat, in Italy the war was one of nerves. Pecco produced an encore performance and proved to be a complete rider, "or at least I hope so" he laughed.

Before the start, the Italian knew what he had to do. “I had the soft rear tyre, so I had to make a difference in the first few laps. I made my best start ever, I trained a lot with video games for reflexes - he joked - After the first lap I saw on the table that I had a second advantage, something incredible. From there I thought about managing the tyres ”.

But it wasn't enough…

“It was tough when I started to see Fabio continuing to recover 3 or 4 tenths per lap, I started to worry. But I also knew that overtaking a Ducati at Misano is not easy, Quartararo was faster in the first and last sectors of the track, but I was faster in the other two. I just tried not to get him too close and on the last lap I was perfect, I did my best third sector. "

Did having already broken the ice with the win last Sunday help you mentally?

“It gave me more motivation and I arrived at this GP more ready. Winning here, at home, was special, in the lap of honour I went very slowly to greet everyone. I saw a big party on the Ducati grandstand ”.

Two wins in seven days: how are you feeling right now?

“It is special after having suffered so much, all those times where I was close to winning but it didn't happen due to mistakes or problems. Winning a race, and then another immediately gives me more confidence. Now I'm sure that if I continue to work well, I will always be able to stay with the best ”.

Which was the most difficult race?  This or Aragon?

“Today's, because this is a shorter and more physically demanding track. While you can take a breather at Aragon on the straight, you don't have time to relax here. I also had less and less grip and it was not easy to stay focused, even though I knew it would happen by pushing like that at the beginning. "

Weren't you sure you could win?

“In terms of pace, I was faster in Aragon. Here at Misano I was competitive, but Quartararo was better than me, I had seen him in the warm-up. I expected to be able to fight for the win, but when you open a gap and then see it decrease continuously you start to have a lot of thoughts going through your head. I took a deep breath and just thought about being as constant as possible. At 6 laps to go I was terrified of making the same mistake as last year, when I crashed at turn 6, so today I risked doing it at turn 1 (laughs) ”.

Was it your only mistake?

"Yes, I tried to brake a little earlier than usual and hit a bump that made me close the front end. I realized that braking late is better for me (laughs) ”.

“In my first year in MotoGP I struggled a lot in braking and I worked a lot to improve. Especially with the Panigale, using Michelin endurance tyres, which give sensations very similar to those we use in MotoGP. I also studied Lorenzo's data. Now I can make a difference not so much in the braking point, but in corner entry ”.

How will you celebrate?

“I'm going to have dinner with my team tonight. We are working very well together and all this will help us also for next year ”.