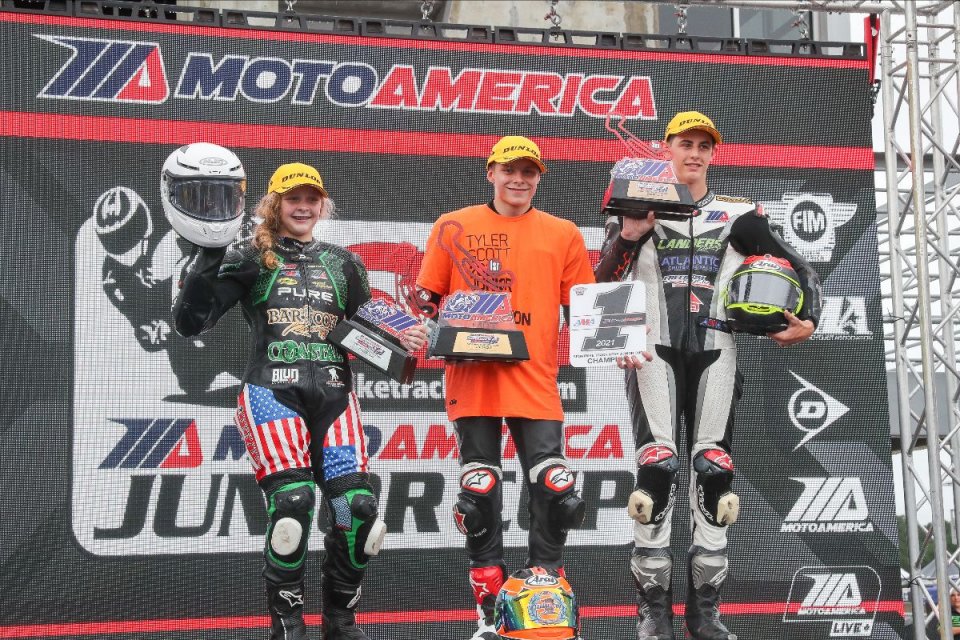 The 2021 SportbikeTrackGear.com Junior Cup Championship wrapped up on Saturday, and Scott Powersports/KTM rider Tyler Scott clinched the title in the best way possible, by also winning the race. The Pennsylvanian started from the pole, but he was overtaken by Veloce Racing Kawasaki’s David Kohlstaedt on the first lap. Scott bided his time in second, and Kohlstaedt crashed in the wet conditions on lap three of the seven-lap event, which handed the lead to Scott, who maintained it all the way to the finish line.

Landers Racing Kawasaki’s Ben Gloddy, who had a mathematical chance to catch Scott for the championship until today, finished third. The New Hampshirite was hampered by a wrist fracture that he suffered a few weeks ago.

When asked about the wet track, Scott said, “It was definitely a little sketchy. More stressful, because I just wanted to keep the bike on two wheels and get points towards the championship. But I’m super happy with the result. I wasn’t expecting to lead most of the race, actually. I thought David Kohlstaedt was going to lead the race. I kind of would have let him win just to not risk any overtakes. But it was a great race and congrats to these guys.”

The newspaper "Iltalehti" reports on its website that construction companies Maanrakennus Pekka Rautiainen ky and Macra oy have filed compensation...
4 days 1 hour ago