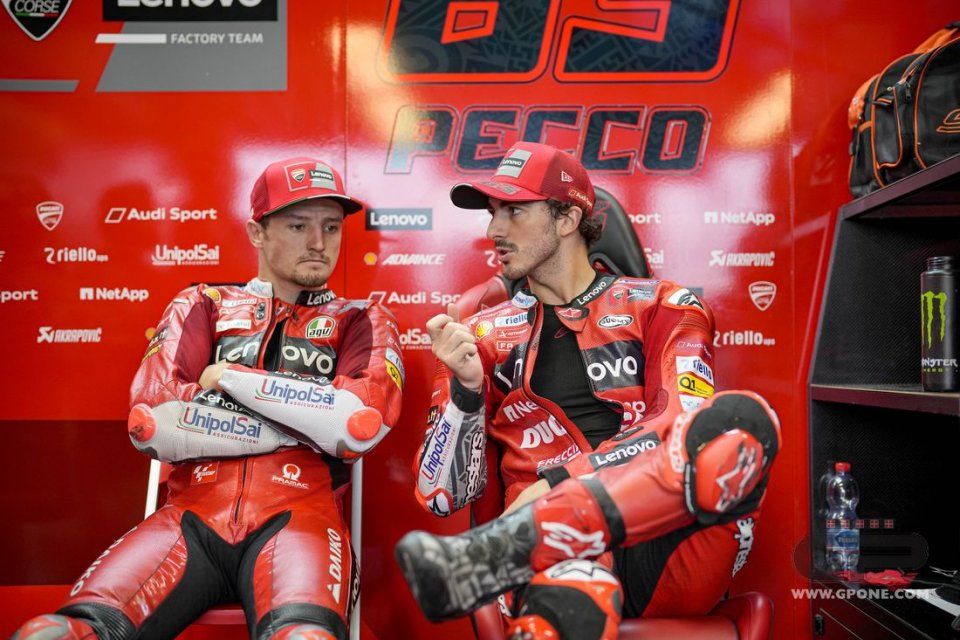 Life’s good at the moment for Bagnaia and he is responding in the same way. After the win at Aragon everything became sweeter for the Ducati rider and he is simply unable to hide it: “I'm happy these days and I'm happy to be racing at home, I think it would have been like that in any case but the victory gave me extra motivation”. The Misano GP could not have started better for him and the classification is on his side. Third in the morning in the dry and second in the afternoon in the wet, Pecco feels at home in all conditions.

“It has gone a bit like Aragon, everything has worked well from the start - he said satisfied - It's nice when you feel great already in FP1, I would have liked to do more laps in the dry to increase my confidence, but I was competitive even in the wet ”.

We know that the appetite comes with eating and Bagnaia has an open account with Misano, after he crashed while leading the race last year.

"What I have to think about is recovering points over Quartararo, 53 is a lot and we need to reduce the gap again – is the goal - If I managed to win it would be even better, it would be the best way to do it. Now it is difficult to say if I will have the chance, let's say that I am not starting with the idea of ​​winning but with that of recovering points".

Pecco is not underestimating his opponent, even if today he was not too convincing either in the dry (7th) or in the wet (18th).

"I am sure that Fabio will be there tomorrow and on Sunday because he is the championship leader and is always competitive - declared the Italian - I will have a chance to beat him because Misano is one of my favourite circuits and I know it perfectly, so I feel ready for whatever conditions we will find. In the wet I would have a chance to make up more points, but it is also easier to make a mistake ”.

Just what Bagnaia must avoid at all costs, but Fabio's defences don’t seem to be impregnable.

"We all know that the Yamaha struggles more than the Ducati in the wet, while in the dry both Quartararo and I used the soft front tyre and neither of us digests it - he explained - Even in the wet I put the medium because with the softer tyre I’m at the limit with my riding style, it continually blocked. Despite everything I was fast in the dry, I didn't expect to be so competitive right away. "

His team-mate Miller also started the weekend on a good foot, finishing both sessions behind Pecco.

“Today we could ride with different track conditions and I am very satisfied, because both in the dry and in the wet I was able to have a good pace right away - said Jack - This morning I expected to find a slow track after the rain that fell on Wednesday evening which brought some sand, but I was immediately very fast, managing to set an excellent time with the medium tyre ”.

The rain messed up his plans a bit.

“I was hoping to do a long run in the dry this afternoon but it wasn't possible, but I still enjoyed riding in the wet. Now we just have to keep working like this. We know where we can still improve, so I'm confident for tomorrow’s qualifying,” concluded the Australian.