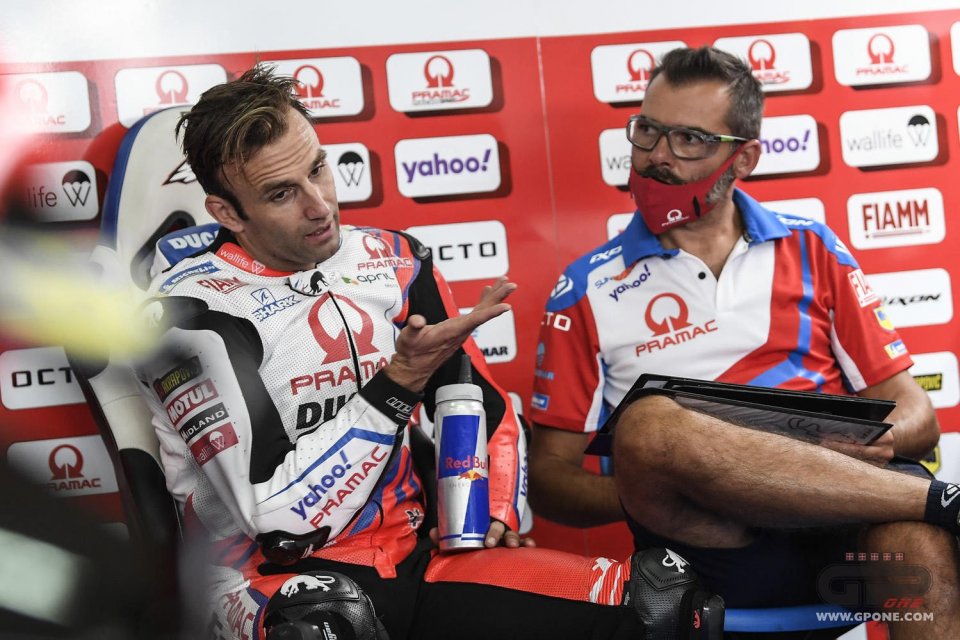 Johann Zarco was certainly not the star of an exciting weekend in Aragon, but part of those results probably depended on the problem he had with his arm, which he’ll soon resolve with surgery. Compartmental syndrome is unforgiving in the MotoGP, and now it’s the French rider’s turn to follow in Fabio Quartararo’s succesful footsteps regarding the surgery he underwent at the beginning of the season. The same medical team will also be performing Zarco’s surgery, and he then expects to be ready to race in Austin.

A true test is needed in Misano, so that he can fight for the podium again, as he did throughout the first part of the season, and get back to scoring important points in the rankings. Johann knows this well, and he also knows that he has the best possible reference in Ducati on this track, namely,  Pecco Bagnaia, who’s in great shape after his success in Spain.

“I feel generally good, and it’s great to be back on track right after the bad race at Aragon,” Zarco stated when he met with reporters before the GP. “I had doctors visits on Monday and Tuesday, so I could schedule surgery for next Wednesday and then be ready to go to Austin. I’m happy with what we discovered during these visits. I think I can battle it out this weekend. I’m used to this situation by now. When the sensations are good on the bike, despite my arm problem, I manage to be fast, and I hope that happens in Misano. Maybe we’ll have bad weather conditions, and it’ll be even better for me. I’ll be able to do my part without suffering too much and conserve my strength. I’ll be operated on by same doctors who performed Quartararo’s second arm surgery.”

At the end of the race in Aragon, you said you didn’t suffer that much. Has something changed?
“I didn’t feel pain in Aragon, but I wasn’t going fast either. I was going too slow in the race, and that was the problem. I think it’s possible that my body has put itself into some kind of safety mode, and I hope it doesn’t do the same thing here. I suffered in other races, and I sometimes even lost out on the chance to reach the podium because of these problems. So the decision for surgery comes from this. I have the confirmation that this thing represents a limit in any case. I had proof of this during the last visits. That’s why I’ve decided, and I’m happy. Some suggested that I wait for Austin and then have surgery. But these doctors, who are very knowledgeable in the subject, told me that I’d have no problems and that a week would be enough. On the contrary, they also told me that it’ll be useful t oexert my arm some after a week. My body can handle this situation without any problem. Maybe I’ll suffer in Austin, also because it’s a demanding track for braking, but I’ll stick it out. Now I’m just thinking about doing my best here in Misano.”

Did you have a few days to assess your Aragon race?
“The Aragon race is difficult to assess. I didn’t really think about it, because I focused on the surgery problem. Then I traveled by car to get to Misano, and I actually didn’t think much of it.”

This season, we’ve often see the ups and downs of the riders. Like you and Oliveira. What does it depend on, in your opinion?
“I think these ups and downs are less severe than they seem. Actually, when a rider does badly, he seems much farther than he is. I think it depends on this, and that the situation is actually more complex than it actually appears. It’s something that’s been happening for two years. It doesn’t take much to end up behind, and sometimes you seem not to understand where you are. Between me and Miguel, I think the situation changed a lot due to his injury in Austria. I don’t think he’s at his best, and maybe he’s in pain.”

What did the trip on the Ducati Darmah in Aragon leave you?
“It was nice to have that experience with the Ducati Darmah. I shared some good feelings with my team, so it was also very interesting because of this, for team building. I got the chance to do it, and I went for it. I had a lot of fun. I think our relationships, between me and the team, are even better.”

Regarding Austin, there are rumors of protests from some riders who don’t want to leave due to problems related to Covid. What do you think?
"I don’t know about anyone’s protests. I have no idea, and I hope we can leave for Austin. We have to leave next week, and I hope to do so. I also hope so for myself that I will, because of surgery, since getting my arm to work right away will be important. So I hope the race will be held regularly.”

What are your goals for Misano?
“We’re going to Misano after Bagnaia's splendid victory Aragon, and this allows us to have excellent references, since Misano is also one of his favorite tracks. He was strong last year too, so we know we have great potential on this track. A potential that I completely missed at Aragon. It’s good for me to be here and know that I have to push to have the same pace as his, which will be what it takes to have a good race. The bikes are very close, so I exclude that one bike has an advantage over the others. But if Ducati can have one, I’ll certainly be able to take advantage of it, so this motivates me even more.”