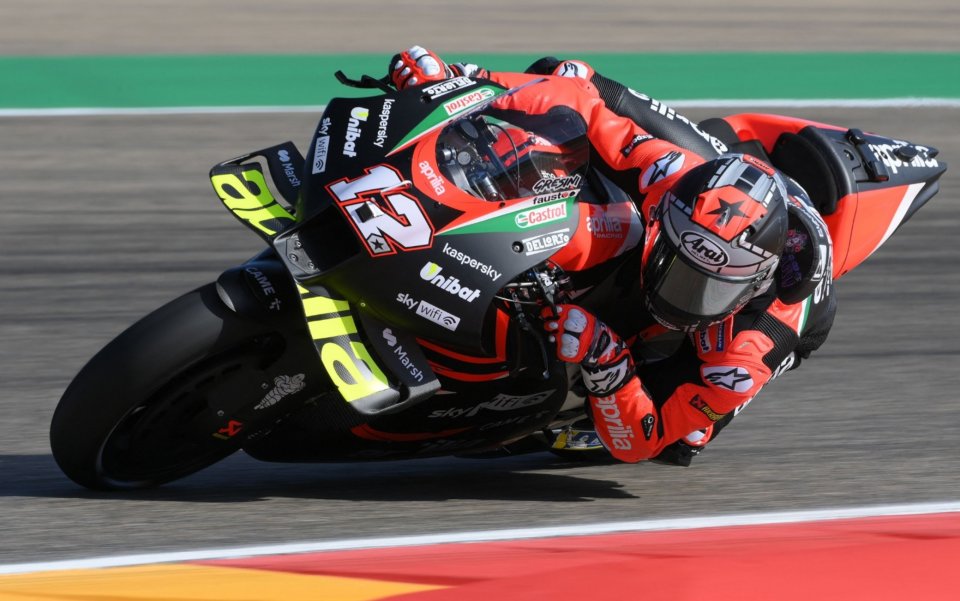 Maverick Vinales is back at Misano again, the track where he made his debut for Aprilia in testing two weeks ago. After the Aragon GP this will be the second official outing for the Spaniard with the RS-GP in a Grand Prix.

On his part, there is no lack of curiosity to see what his level of competitiveness will be, but at the same time he expects a step forward compared to MotorLand, where he finished 18th, 27 seconds from the top.

“I will face this round as I did in Aragon - he commented - I am aware of what the situation is and where to improve. In the end, this is the path I will have to follow to improve and get up to the front with the best, trying to find confidence and gain experience. Personally, I feel good on the bike and I want to try to learn and improve, since this is my job and what Aprilia expects of me ”.

Misano is a track where Maverick has already lapped with the RS-GP, so this examination might not be as complicated as MotorLand.

"I think I'll be a little closer to the other riders here at Misano and I'll be able to do better with the Aprilia every weekend. On Monday we will then have the tests and we will be able to rack up miles. It will be an interesting and important test, even if at this moment I don't need to test many things, because of the risk of making mistakes. In fact, I have to concentrate on what I have, in order to understand and adapt to the Aprilia as best I can. At Aragon last week, I tried to run conservatively, while here I will try to push harder if there is a chance. As I said, I have to learn, stay calm and keep working. This is my job ”.

The Riviera round is as if it were Aprilia’s home GP and so expectations are high.

“For me it will be a race like any other. Obviously, it will be special for the manufacturer, which is aiming to score a good result. As for the track, I don't think there is a specific area on which to focus in order to improve. Right now I just need to do as many laps as possible and understand the sensations ”.

At Misano World Circuit, the starting point will be the Motorland weekend…

"I ended the Aragon round on the up, in a completely different way than how I started it. For example the position on the bike. I started following one direction and then I finished taking another path ".

One final consideration was for his teammate…

“What is there to say about Aleix? He is riding the bike in a fantastic way and you can all see his level of confidence. Right now it's complicated to be in front of him and I don't think it's even realistic to think of doing something like that. My priority is simply to have confidence, ride and accumulate experience. I don't have to have the frenzy of quickly making steps forward, because then the risk is to make a mistake and have to go back”.