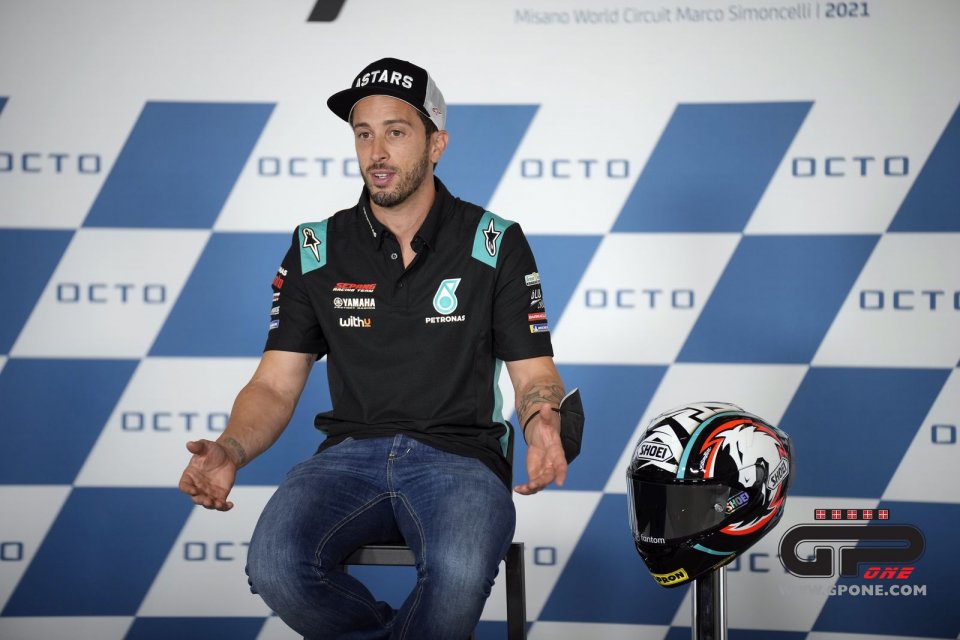 Andrea Dovizioso already seems perfectly at ease wearing the Yamaha Petronas team colours and the smiles on his face say it all really. No one just a few weeks ago would have thought that Dovi could have returned to MotoGP so soon and moreover in through the front door.

"At the end of last year I was not worried, I had done what I wanted – he began his story - Then something crazy happened and doors opened, if it hadn't happened, I think I would have retired but I wasn't living that situation badly, or with anger. What happened this year, I’m happy to be in this situation”

Were you surprised by the divorce between Yamaha and Vinales?

“I think everyone was because no one knows the details of what happened. Nobody was thinking of a stop with the current season ”.

Didn't you have any doubts about accepting this challenge?

“I was feeling good at home, I was doing what I like, my passions, and I was a bit more relaxed, my girlfriend especially pointed this out to me (laughs). But when the Yamaha door opened, I thought about that. But I couldn’t say no. It was already in 2012, after a good year in a satellite situation, my dream was to be on a factory Yamaha. And it didn’t happen. That fixed it for me in my mind. And to have this chance now, after eight years with the same bike it was something I wanted to do and that Yamaha was my bike. it's the feeling I have after observing it for so many years. For sure, it’s more risk than the possibility to do good, but I think for a lot of people it’s like that, but I don’t care, I race for me; I race because I have the passion to race. I will take that risk”.

How much did you miss MotoGP?

"It has been my world for twenty years, it is normal that I have missed it, but last year it ended badly and this had its influence. I watched every session, I recorded them, because I like this sport and the technique, I wasn't interested in just seeing who won on Sunday but understanding. I also missed the adrenaline, but I had a lot of that thanks to motocross. If anything, I missed not being at the front in MotoGP ”.

Did you come back to do it again?

“I'm here to fight for the title, like any other rider, if it's possible we'll see. I've never raced, and never will, just to be there: I don't enjoy it and I don't like it. At that point I would have done something else ”.

Why did you say no to Aprilia?

“Massimo Rivola is a really good person, and he pushed me to ‘try the bike, try the bike, try the bike’ - and at the end he won! It was a good idea. But I didn't approach this to race. It wasn't the situation I wanted, but not because Aprilia wasn't good. But I didn't approach it to race. I'm quite straight and I know what I want. So there wasn't the situation I wanted. Not because the Aprilia wasn't good, because they are showing how good this bike is, and immediately when I tried this bike, I told them, 'the base of this bike is really good'.

"I am pleased to race with Valentino, not because he has won a lot but because he is special"

"To be team-mate of Valentino is something special, not just because he won a lot of titles, but as everybody knows, he's a special person. It's not about just a champion. He's charismatic, he's a special person. Over the course of our careers we have always crossed paths, but we have never fought out a championship against each other, it was a shame. Now he is enjoying these 5 races, the last for him, and I will try to do the same. I am very curious to be in the garage with him, I will discover a lot of things and I am very pleased. So I'm happy to be his team-mate. It's not the best moment to be his teammate, about speed, because in the past he won a lot of titles, and I will start from zero, so I don't think we will fight for the victory.

Let's move on to the M1: you will inherit Morbidelli's, not exactly the most updated.

“I’m not worried about that, I don't have to fight for something about the championship and the result, and the important thing is in our deal was to have a factory bike for next year. After 8 years with the same bike, it will take time to adapt. The important thing for this year is to feel good on the bike position-wise and understand the bike. Because for sure I will have to ride in a very different way than the previous one. When I feel comfortable with the position on the bike, I can start to push and give my feedback. And we will see.”

Did you ask Crutchlow for any advice?

"Everybody knows Cal. I spoke with Cal for one hour in Aragon, I was laughing for one hour! He explained a bit about the differences. Looks quite clear, every rider says the same things, but like I said in this moment, I'm not worried about that, because my change is bigger than just the difference between the bikes. On another side I’m lucky because I’m able to do five races, two tests before the next season, which is what I am looking forward to”.

You will have Forcada as a crew chief…

" Everyone speaks good about Ramon; he is a champion engineer and has a lot of experience of this bike. It's perfect for me."

Do you think MotoGP has changed a lot this year?

"From last year, the championship changed a lot. The only big change was the casing of the rear tyre. For sure, that affected a lot. Plus there are the new generation of riders who start immediately with a really good speed. This is my opinion, but I'm not sure about that, and to be able to ride a completely different bike, maybe will help me to understand this and realize what I have to change the most about riding style.”

"Quartararo surprised me, Marquez is in a bad situation, Bagnaia used his head at Aragon"

In this 2021 season who has surprised you the most?

“I didn't expect a Quartararo like that, not because he wasn't strong but because he has done something really great. He struggled last year, while this year he is very consistent. He has taken a crazy step forward, he won many races by breaking away while struggling on the straight. I thought the two Suzukis were more competitive, but it is difficult to understand from the outside. Then Martin, we all knew he was fast, but winning after his injury was something very important. "

What do you think of your historical rival Marquez?

"It is very difficult to analyse his situation and that of Honda from the outside, but his conditions seem very bad to me and the bike is also not at its best, the other riders are showing it. Marc is doing something crazy”.

“Pecco did a spectacular race, keeping an exaggerated pace and driving like a god. Staying calm in the end was his winning card because Marc didn't have any to play with. He tried to the very end to stop him, but Bagnaia used his head and didn't have to invent anything; he was stronger in braking and Marquez could only make a mistake ”.

Who will do better from here to Valencia, you or Vinales?

“Testing first makes the difference, you can't do much on a race weekend. In this moment he will be faster, but we will see how he goes in the last races ”.