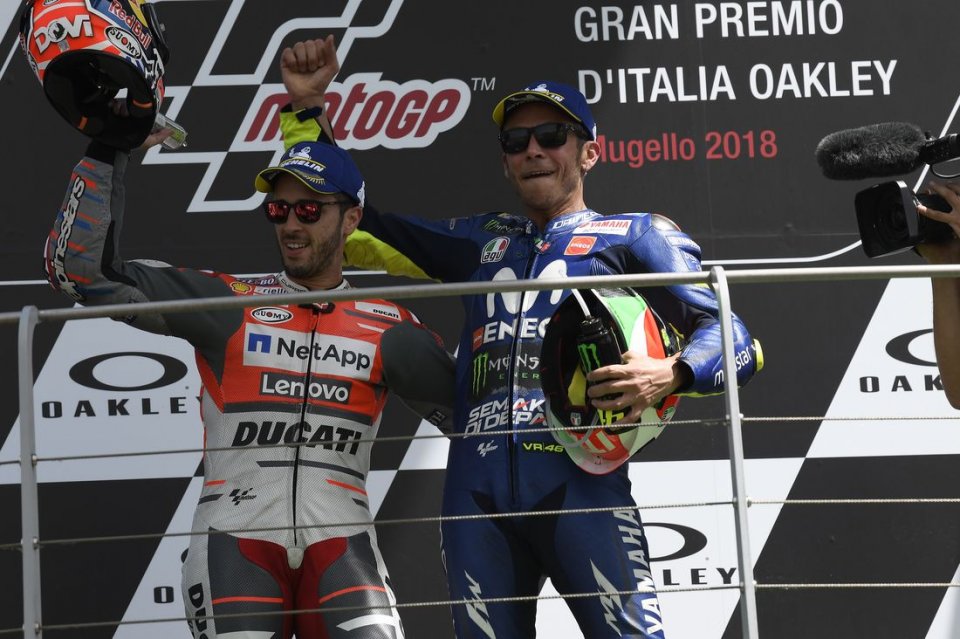 It seems a bit like ‘Operation Nostalgia’, conceived around the table for the Misano Grand Prix, but it actually the current situation that is the result of a crazy riders’ market after Vinales abandoned Yamaha. From this weekend until the end of the season, Valentino Rossi and Andrea Dovizioso will team up with Petronas team colours. A 'senior citizen' team with the age of the two riders which, added together, reaches the remarkable figure of 77 years, two old lions who will share the garage with very different goals and thoughts.

For the Doctor, this last half of the season is becoming a bit of a farewell tour with little satisfaction. Not that Valentino is not trying his hardest (and the recent Silverstone weekend, until Sunday was not exactly the litmus test), but he has big difficulties in interpreting the tyres over the race distance and, with only a handful of Grands Prix before his final farewell, it is obvious that his motivation is not exactly sky-high.

Rossi had expected a different year, not one in which he could fight for the title, but at least he had high hopes of scoring another podium (for the record he would reach the round figure of 200), and with the double race at Misano he still has hopes, but the number of opportunities to achieve this result are becoming less and less. The Doctor is thinking about his future, made up of diapers to change and car races, just so as not to lose the habit of speed. The public will still be rooting for him, as in the previous races, and is aware that seeing him race for the last time alone is worth the ticket price, regardless of the position in which he finishes.

For Dovi, however, it’s a completely different story. The spectre of retirement passed in front of him, but he managed to dodge it. Taking a year off was a risk, but luck was on his side and at the age of 35 he is ready to start a new life. Yamaha has always been a fan of his and having found one in his hands is the best news he could wish for.

While for Valentino the next five races will accompany him towards retirement, for Andrea it will be a new beginning. He will have to make a virtue of necessity and settle for the 2019 M1 he inherits from Morbidelli, but in the coming months the sensations will be more important than the results. A bit like what is happening with Vinales, he will have to learn to ride a different bike, an in-line 4 like the M1 which on paper is completely the opposite of the Ducati he has spent the last 8 years with.

Then, in 2022, things will get serious, with an official Yamaha and objectives to be respected, because while Dovizioso is almost a kid compared to Rossi, time passes for everyone, the new generations have already arrived and 35 they have many more shots to fire.

In the meantime, however, the fans can enjoy the romantic side, seeing under one roof two riders who have made the recent (and not only) MotoGP history. The jester Valentino and the calm Andrea, as different in front of the camera as similar for the passion that has driven them to continue racing despite everything. Five races that will be an array of emotions, however things pan out it will be a success.