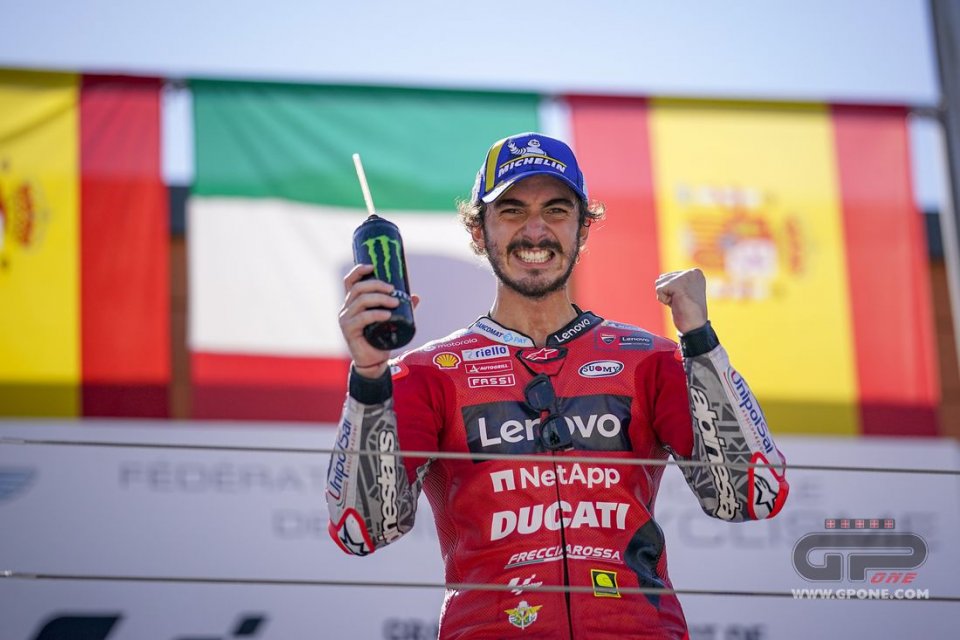 For Pecco Bagnaia, the first MotoGP victory could not have come at a better time: a few days before the home race (for him and Ducati) at Misano. Now that the taboo has been broken, the rider from Piedmont has lifted a burden off his shoulders and can look at the season finale in a different way.

The gap from Quartararo (53 points) remains a big one with 5 races left in the championship, but Bagnaia is not someone who gives up easily. He also likes Misano a lot: he often trains there with the Panigale and last year he was leading in the second race before he made a mistake.

"It's only been a few days since last Sunday's GP, but I'm already ready for another race weekend - he declared enthusiastically - The victory on Sunday at Aragón was incredible and gave me the right energy to face our second home race at Misano. My team and I are doing an outstanding job, and I feel very comfortable riding my Desmosedici GP, so I'm optimistic for this weekend. This is a track that I like a lot and where I often train with my Panigale V4 S. Also, last year, I got my first podium in MotoGP here! I'm very determined and ready to fight for the victory again in front of all our fans".

Miller is also ready to hold high the Ducati flag at Misano. At Aragon he had been competitive in practice, but he was lacking something in the race.

"I'm very excited to be back racing at Misano! – said Jack - It's our second home race, and the atmosphere is always incredible with our fans on the Ducati Grandstand. Last Sunday's GP at Aragon didn't go as we had hoped, but in the last few races, my feeling with the Desmosedici GP has been really positive, and that makes me very confident! I'm determined to finish our home Grand Prix with a good result!"

VIDEO - Rossi and Bagnaia in Misano: “You should’ve started with the medium...

Marini: "I gave everything to get onto the podium of the Gulf 12 Hours...