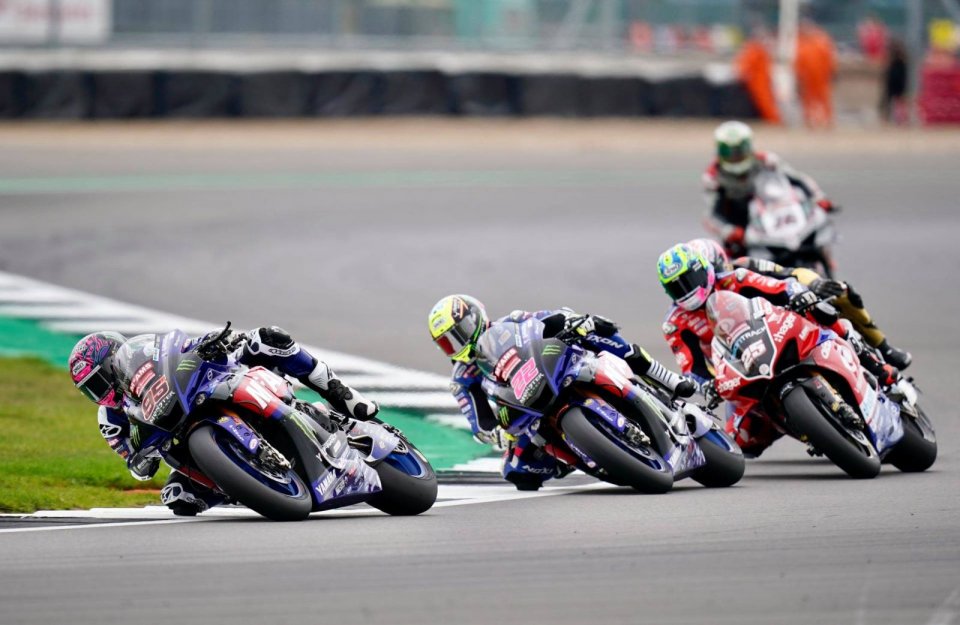 Since its calendar entry in 2018, the Silverstone 'National' (short) layout has always offered spectacular races, full of overtaking, hard-fought, narrow gaps, in pure BSB style. This was confirmed over the weekend, when the Northants circuit finalized the eight riders who will return for the Showdown, decisive for the outcome of the 2021 BSB title. While on the one hand the McAMS Yamaha team did hara-kiri while fighting for the victory in Race 1, with Tarran Mackenzie and Jason O'Halloran making amends in the two Sunday races, on the other Danny Buchan, Glenn Irwin and Josh Brookes secured a top-8 finish in the final round of the Regular Season.

Showdown aside, as mentioned, it was undoubtedly the clash that saw the two riders of Steve Rodgers' team as protagonists. Winners of 14 of the 21 races held until Snetterton, despite yet another 1-2 within reach, on the penultimate lap of Race 1 Mackenzie overdid it coming out of Brooklands, losing control of the bike. A high side that, inevitably, also involved the championship leader O’Halloran, unable to avoid the YZF-R1. Albeit in a different way, history repeated itself in the same place where something similar happened in 2019 (then the fault was totally the Scotsman, who hit the Australian). For the record, this episode opened the doors to the first win of the season for Glenn Irwin and Honda Racing UK, in front of the Ducati riders Christian Iddon (VisionTrack PBM) and Tommy Bridewell (MotoRapido).

After qualifying for the playoffs of the last three events, both made amends the next day. At first, Mackenzie accomplished a real feat by winning when in fact he shouldn't have been in the race. Following the crash on Saturday, he had been declared ineligible to participate in the remaining two scheduled races because of a broken hand. On Sunday morning he asked for a further medical check-up, receiving the green light to race. Overcoming the pain, Taz took the win in Race 2 by just 83 thousandths, while O’Show took revenge in Race 3 by 0.124.

Brookes and Buchan edge out Ray

While events involving the McAMS Yamaha duo are nothing new in the BSB, the exciting Showdown duel for the remaining two places available aroused some interest. With Danny Buchan (TAS Racing), Bradley Ray (OMG Racing) and Josh Brookes (VisionTrack PBM Ducati) separated by only eight points, the last 30 laps on the Silverstone short (which became 15 due to the red flag caused by an engine failure for Luke Stapleford's GSX-R 1000) proved to be very exciting: in a heart-pounding finish, the two-time champion managed to secure third place at the expense of Buchan, following up on the previous podium of Race 2 and gaining access to the Showdown, despite all the risks involved. Suffice to say, if he had finished fifth, the Ducati man would have been sensationally excluded (!!). The Essex rider was able to console himself with 6th place overall, while his brand-mate Ray missed out by four points.

The Showdown will begin in two weeks’ time at Oulton Park, this year reserved for the best eight riders in the standings, who have been promoted to a thousand points plus the Podium Credits won at the end of the first eight rounds. O’Halloran leads with 1071 points, 30 ahead of team-mate Mackenzie, 45 over Iddon, 47 over Bridewell, 56 over Hickman, 57 over Buchan, 59 over Irwin and 69 over Brookes. Two Yamahas, three Ducatis, two BMWs and a single Honda. History shows that, in nine races and with 225 points still up for grabs, anything can happen.

Smith suffering from aftermath of the Le Mans 24 Hours, replaced by Tulovic at...