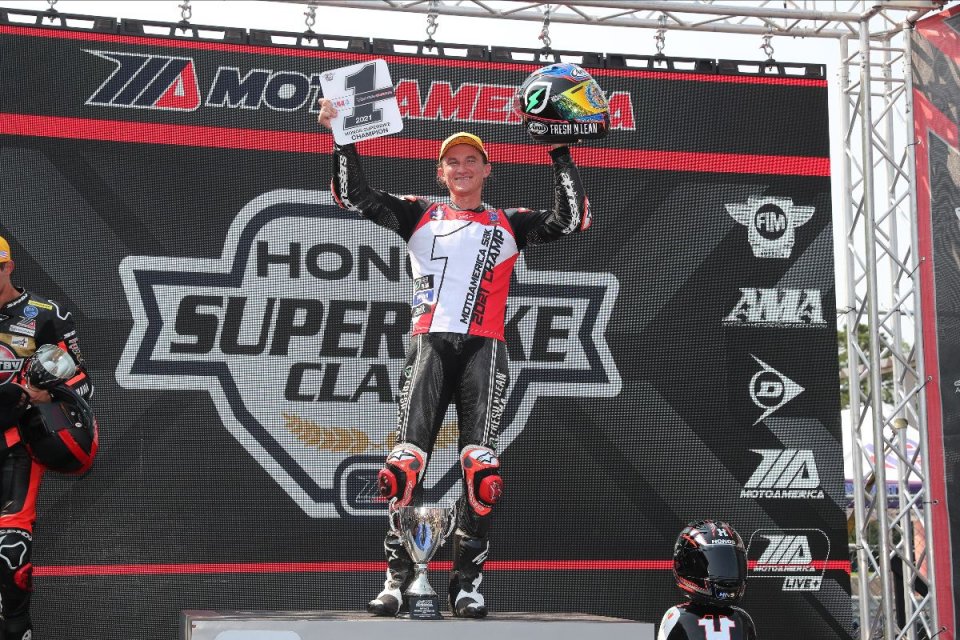 Jake Gagne wrapped up the 2021 MotoAmerica Superbike Championship on a record-setting, two-race Sunday at New Jersey Motorsports Park, the Californian winning his 16th race of the season to match the record held jointly by Josh Hayes and Cameron Beaubier for Superbike wins in a single season while also tying three-time 500cc World Champion Wayne Rainey’s mark for career victories.

Fresh N’ Lean Attack Performance Yamaha’s Gagne won both HONOS Superbike races at NJMP on Sunday after winning the lone race on Saturday in MotoAmerica’s Superbike tripleheader. The two wins were his 15th and 16th on the season (those are also his career win marks in the class) and the first victory on Sunday morning is the one that earned him the 2021 MotoAmerica Superbike crown.

“Even on the bad years, I’m racing motorcycles - Gagne said of the many seasons of racing that eventually led to the Superbike title - It’s what I love to do. It’s fun. It’s sure a lot more fun when we’ve got a winning motorcycle, a winning team, and we can manage to get some wins. It’s been an incredible year. I wouldn’t have thought going in that we would be 15 wins deep. It’s pretty surreal. Again, hats off to this team because the guys are working so hard, and the bike has been super, super dialed in. We keep trying to go faster. These guys are always chasing us down and we’ve got no choice but to keep trying to go. But it’s amazing. We got another race today, so it hasn’t quite set in yet. We’ve got some work to do this afternoon because I know it’s not going to be easy, so we’ll roll on to race two.”

As he has done all year long, Gagne dominated and again led every single lap of both races en route to the two wins. Gagne has now led 273 consecutive laps in the 2021 season.

“Jake (Gagne) is the class of the field now and it seems like I’m the next best guy over the last couple of rounds - Scholtz said after race three - Just got to keep chipping away and try to catch Jake. We know what we have to do as far as lap time. We went quicker now than we did in the first race earlier on. So, we’re always getting faster, but we just need to find something more, really.”

Herrin, meanwhile, was in his comeback weekend after suffering from COVID-19 that forced him out of two rounds of the series. If Herrin’s life wasn’t hectic enough in the past few months, his wife, Rachel, also gave birth to the couple’s first child this week. He put in a tough day’s work on Sunday, however, and came out on top of two hard-fought battles with Warhorse HSBK Racing Ducati New York’s Loris Baz.

“First off, just congrats to the whole team - Herrin said after race two - Congrats to Jake (Gagne). It’s been a difficult year without (me) doing good, but then seeing your teammate doing good it’s hard, but at the end of the year when he wraps it up, it feels good. It’s something that you’ve got to be proud of him. It’s 15 wins in a row. It doesn’t matter if you’re racing go-karts with your buddies. If you beat them 15 times in a row, that’s a lot. Fifteen wins in a row is something special, something that nobody has ever done before and it’s really cool to see, actually. So, congrats to him. Congrats to the whole team. They’ve been working hard all year.

“Having the baby, like I said on the podium, it just changed my whole outlook on everything. It has been something so special, something that so many people have been talking to me about and trying to describe the feeling, but it’s not like any other feeling that I’ve ever had. I was there for the whole thing, cutting the umbilical cord and all that stuff. It’s been good for me for racing I think, because just in the four days that he’s been alive, it made me realize there’s so much more to life than racing. Racing has always been the only thing I cared about. It was good for me, because now I can come and have fun racing. For some reason, it seems more fun than before. I still haven’t got a win this year, and I really want that. that would make it a lot more fun. But it’s become different than it ever has been. I’m happy. I’ll be glad to see him, but I want to try and get a better result for him. Just stoked that he’s here for these last few rounds of the year. Can’t wait to get him to the track this year. It’s been special. It’s been fun. I’m glad to be up here. I’ve been down all year, and it’s been bringing the team down, so I’m happy to get up on the podium for them.”

With Baz finishing fourth in both races, it was M4 ECSTAR Suzuki’s Cameron Petersen who finished fifth in both. Sixth place was different, however, with Scheibe Racing’s Hector Barbera earning the spot in race two and Fresh N’ Lean Attack Performance Yamaha’s Toni Elias besting the Spaniard for the spot in race three.

As for tying MotoAmerica President Wayne Rainey with his 16th career AMA Superbike victory, Gagne said, “I actually talked to him. I saw him in the bathroom right before this race two and he mentioned he had 16. He wishes me the best. Hopes that I can match that today. It’s been an amazing weekend, really. Getting the championship, that’s a dream come true. It didn’t quite set in because we had to focus on this race too, but it’s amazing. I still can’t really believe that we got 16 wins in a row. It’s pretty unbelievable. But all I do is go out there and ride as hard as I can every lap and every race. This bike is the bike to beat. Hats off to these Yamahas. It’s great. We got a Yamaha sweep here in New Jersey. These things were rolling really good. So, hats off to Attack Yamaha and all the boys and Mat (Scholtz) and Josh (Herrin) and Toni (Elias), everybody. We only have a couple days to go before we’re back on track, so we’re going to be just focusing on that all week and then maybe after that we’ll relax a little bit. But I know these boys, like we said, Mat’s going to be strong at Barber. Josh is going to be really strong at Barber. These guys go really well there. So, I’ve got to stay on my toes. They’re going to want to win real bad. The championship is kind of done, so it’s go time.”