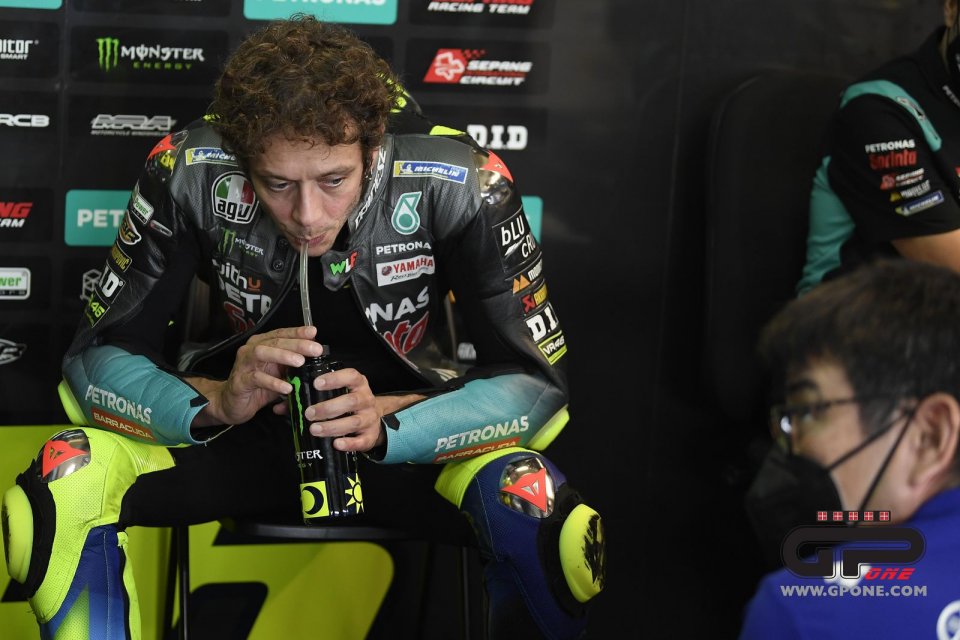 Behind him was only his brother Luca and, then, not classified because of fall, Jake Dixon and Alex Marquez. Ninenteenth and off the mark. Valentino Rossi’s decline in career this autumn is rather strange but, without wanting to defend him, it’s also true that none of the Yamahas on the track seemed competitive at Aragon. And even Fabio Quartararo ranked 8th, over 16th behind the winner. A gap that's double for Valentino, but one for which the nine-time world champion doesn't look for excuses.

“It was a difficult race after a difficult weekend," were Rossi’s first words. He continued: “I was hoping to fight for the points and remain among the fifteen, but I had to worry about the tires in the first laps with the soft. I tried not to wear them out too much, with a sufficient pace, but it wasn’t enough. That’s how it went today.”

Rossi is subdued during this season finale, after he announced his retirement. But, after Bagnaia’s pole yesterday, Vale had prophesied his protégé’s success. He knew what he was doing.

“I’m very, very happy for Pecco, personally. We’re great friends, We’re often together, and I have to congratulate him. You can’t forget your first victory in the MotoGP, and a victory like this, fighting until the last corner.”  Vale didn’t say anything against Marquez. He didn’t mention his name. “He was fantastic, and he rode the Ducati in a fantastic way. I saw the highlights of the Grand Prix. He was always up front. He was also fast at Silverstone. He’s always very fast. Sometimes he was unlucky. Yesterday, I tried to hypnotize him," Vale said jokingly. “Constantly repeating to him ‘hard’,’ soft’, because he sometimes makes unusual tire choices. Right now I feel proud, because we took him from the Moto 3 and helped him up to this level. Fate is obviously in his hands, but we’re happy with what he’s done, and also happy because he’s an Italian rider.”

The choice of tires was, therefore, required for everyone.

“Yes, we had to use the soft ones, because it was faster with the soft ones. I rode very gently, but when you’re so far behind, it’s difficult to recuperate without wearing out the tires. And then this track is difficult for Yamaha.”

During his ordeal, where he ended in second to last place  (19th, only in front of his brother Luca), Valentino followed Maverick Vinales for a while.

“I saw Maverick improve a lot during the race and, in the end, he had a similar pace as the leaders. I realized that he had a problem in braking, entering corners, but Vinales is a top rider, and he’ll improve.”

Rossi breaks a moment but then starts talking about the success of his protégé.

“Pecco’s race today was an A plus. He started from the pole, was always in front, and won the victory by fighting until the last lap, to the death. He only missed the fastest lap, otherwise, he would’ve done what we call a “Grand Chelem” in racing. We’re all very, very happy. Me, Uccio, Albi. They’ve worked every day with these guys, but it’s true that the credit is theirs, because fate is in their hands. We’re proud to have brought them to this level. At the end of the year, I’ll be stopping and [leaving] Pecco and Franco Morbidelli, who are two of the strongest riders on the grid. One on the Yamaha and the other on the official Ducati. It’s great. I’m going to really like watching them, and I’ll be cheering for them.”

Bagnaia: “The Sprint Race? Even the opinion of the riders should count.”