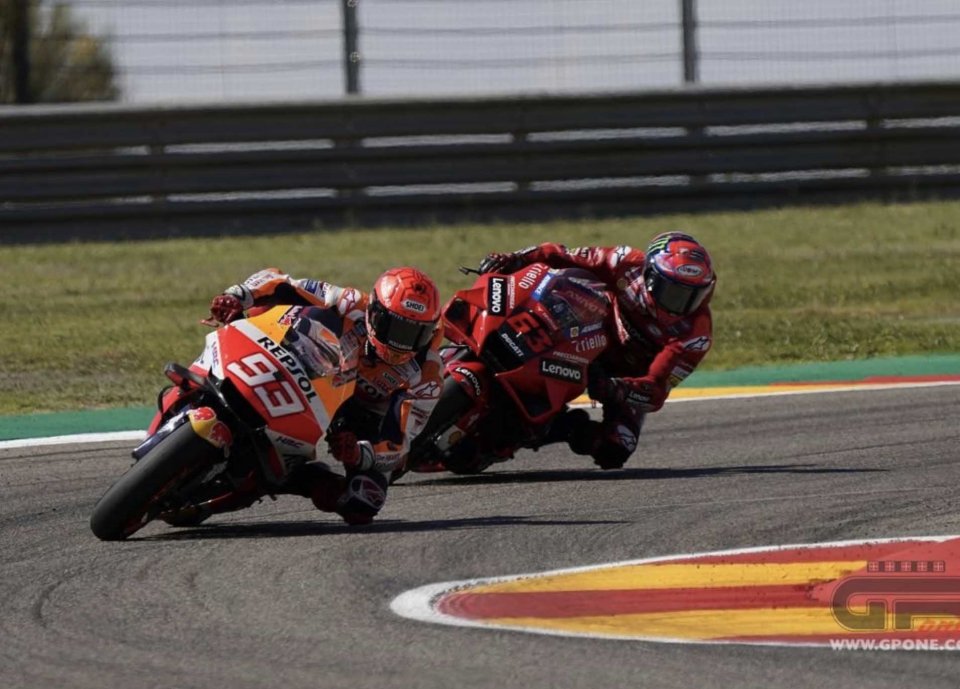 At the end of a breath-taking race, fought, curve after curve, against Bagnaia (Ducati) which "reminded me of the duels with Dovizioso", according to the Spaniard, Marc Marquez ended the Aragon weekend in the runner-up slot. A result that, although it does not change the outcome of what has been a suffered championship and which is now in its final stages for the eight-time world champion and his Honda, is proof that what had already been glimpsed at Sachsenring was not a simple flash in the pan but perhaps, under the ashes, the phoenix is ​​beginning to re-emerge.

After a difficult weekend in practice, with two crashes, how do you feel after such a hard-fought race?

"Of course, I’m happy about being on the podium with this second place because we were coming with two crashes in a row - the eight-time world champion said – A crash on Friday, a crash on Saturday and I’m human, so it’s difficult to approach a race like this, to be fast and of course I don’t want to make another mistake, because these types of opportunities and the feeling with the bike on the weekend was good - I don’t know if I will have another opportunity in the future like this. But I tried. I tried in the beginning to follow Pecco and I knew before giving everything on the final attack that he was riding very good. He was braking so late and stopping well the bike. Also on the acceleration side he was really fast. I knew also in the last lap that even if I arrive in the back straight in front that he would overtake me, but I tried. I gave all that I had and he did an incredible race, so congrats to Pecco. It’s extra motivation for us in a difficult year."

All this even though you are not yet in optimal physical condition, were there any moments in which you didn’t push yourself hard?

"I tried to analyse where he was fast, where his weak points were. But there wasn't any. In all the race track he was fast. I fight many times against Dovizioso. Pecco was same as Dovizioso but with more corner speed. So, I said 'OK, where can I overtake?' I didn't find a place to overtake because he was braking later than me and stopping better the bike and accelerating better. "I was a little bit faster on some braking points, on the left side especially. On the right side I was struggling a lot. I tried, but the problem is when I try, I saw a little bit I was on the limit, I gave up a little bit and he came back with good speed. I hope all the fans enjoyed the battle; it was a great race. I didn't enjoy it on the bike, I suffered more than I enjoyed, but it will be nice tonight with a pizza watching the race."

This situation has drastically changed your riding style...

"Yes, I used to push a lot on the front of the bike, and when cornering I was always able to get back control with my elbow. Not being able to do that anymore is the main cause of many of my crashes this year. When I lost the front I was able to recover before, now most of the time I let it go. I know that when I get back to a better physical condition I will be able to get back to racing with my true riding style. "

Earlier you said "maybe you wouldn't have another chance", what did you mean? Are you starting to have doubts about being able to return to your previous level?

"My mentality is the same as before the accident - continued the Spaniard - but after I returned at Portimao I expected to recover more quickly. Right now I can't ride the way I want, when I try I end up crashing. Right now we are working to find an alternative way to ride, in order to be fast and get good results. This weekend the feeling with the bike was really good, but as already said at the moment I feel like a normal rider, without that bit extra that this year riders like Quartararo or Bagnaia are proving to have. Without being able to ride with my style, that of 2017-2018-2019 to be clear, I can only limit myself to perfecting the lines, braking and so on, I am able to be fast on some tracks, on others less, like all the riders do, but I have lost that little bit more that made the difference before ".

What did you think in those last laps of the race behind Pecco's Ducati?

"I felt a lot of pressure this weekend, both physical and mental. By now I know that when I try to ride as I would like, I risk losing the front and crashing, so on the one hand I know I don't have to take risks, but on the other my competitiveness takes over and today I let myself go, trying to keep the lines as precise as possible to take as few risks as possible, while giving my best. I know that the team supports me and I am happy for what I have done, for sure I will look back at the race later. "

Nakagami mentioned having a different feeling on the front when he chases the Ducatis, what do you think?

"Racing behind the Ducatis is always a challenge, especially when they manage to maintain the grip of the rear and with that acceleration in the corners it is something strange and incredible to see. They certainly also have weaknesses, but today Pecco was very good at not showing me even one ".

Do you think we will be able to see a Marquez at this level again in Austin?

"I prefer to tackle the races one at a time, the next track is Misano. It is true that here in Aragon we got an excellent result, the feeling with the bike was incredible, but physically it was one of the weekends where I suffered the most. After Misano there will also be tests, but my goal is not to be fast on some tracks, but to be able to be fast in every race. "

At this point in the championship, looking back on your return at Portimao, did you expect more or less these results?

"Honestly, I was hoping for a faster recovery, which did not happen, and we are also working a lot on the bike, the other manufacturers have all improved this year. In the next five races we will continue to work to obtain good results, especially in view of the 2022 season ".