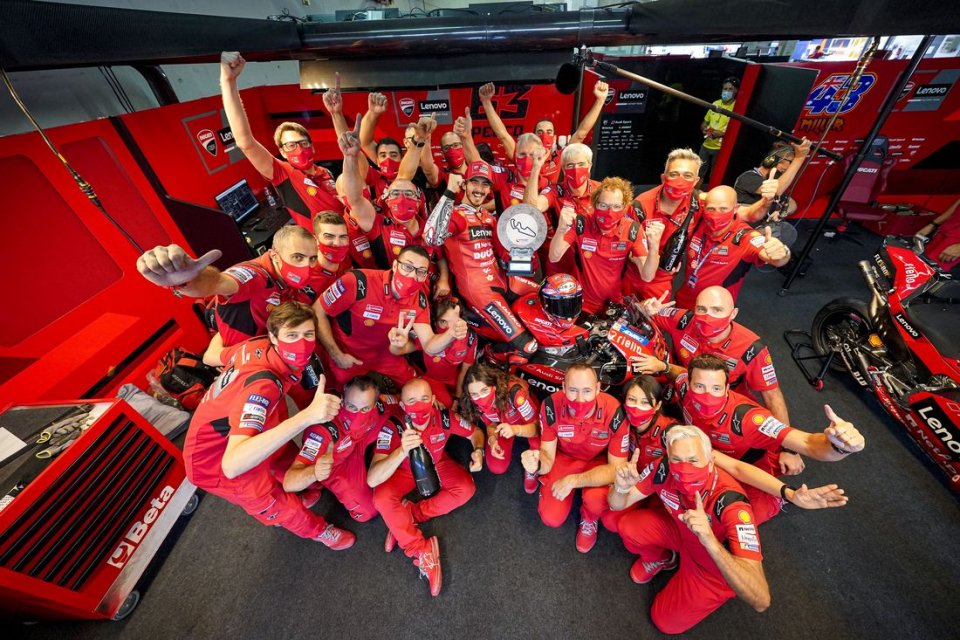 More than a victory for Bagnaia it was a liberation, from bad thoughts, from bad luck, from criticism, from everything that could have been but was not. Two and a half years of watching others win, knowing that you have the means to succeed at hand but failing due to bad luck, mistakes, problems. If it’s true that you never forget the first time, winning after keeping Marquez at bay for 23 laps that seemed like an eternity, every second, every overtaking response, right down to the chequered flag will now be carved in his memory for ever.

“The first thing that I think was ‘ah, it’s over’ - laughs Bagnaia - It was a long race, all the race on the board with ‘plus zero’ and was a long race for the conditions. I thought of all the times that I had been competitive and had lost the opportunity, all of this made winning sweeter. Like having done it after a great fight against Marc, it is nice to arrive alone at the finish line but like this it is even more so. And then I had never done it, only once in 2018, in Moto2 against Oliveira ".

What sort of victory is it for you?

"To win today is a great liberation. I’m so happy. It's difficult to say something now, but to finish first is a dream come true. I also beat Marquez, one of the riders with the most titles. Even if he is not yet at 100% he remains very strong ”.

“You can never imagine what a victory will be like, today's was great. When I start, my feeling was great with the bike and I was knowing that Marc was the only one with a bit better pace than me. When I started, I tried to push and I opened a gap with the third position, so I continued to push. I had never scored points here in MotoGP, but this time, right from the first free practice session, everything was perfect. In qualifying I did a helluva time and today an incredible race with a fierce pace ”.

Did you think you could win before this?

“Every rider needs time. I struggled a lot in the first year, apart from Phillip Island when I finished fourth – but fourth with 12, 15 seconds from the first one. And this year I was fast, but sometimes I was without possibility to win. In Portimao with the yellow flag in qualifying, I missed the opportunity to fight. In Mugello, I crashed because of my mistake. So every time I was missing something. And this weekend we worked perfectly I think. It will not be easy to make a weekend like this, because not touching anything on the bike is incredible.”

"Every time I wasted an opportunity I built up a lot of anger, it wasn't easy to manage"

You talked about wasted opportunities: how did you react in those moments?

“I built up a lot of anger and it wasn't easy to manage. At home I saw the posts on social media, the insults, it wasn’t easy. But I knew that something good always comes from difficult situations and my first MotoGP victory came on the most difficult track for me ”.

You said about the time each rider needs, did you take too much?

“If we look at my career, in Moto3 I struggled before being competitive, until I went to the Aspar team where I felt good. On the contrary, in Moto2 I was first a rookie of the year and then world champion. For sure, after these two years in MotoGP and winning now in the factory team like this is a great emotion for me. Sometimes the situation you are in is important, to feel you are at the centre of a project, like I am now and this makes me more serene ".

Valentino said that you would win…

“He made me more nervous, he had never said such a thing to me before. Then I calmed down, I thought I had the pace to be with Marquez and that I had done a good job, in other words I could win. I have to give a hug to Vale now because he said to go in the race with hard-soft, from now on he can tell me every time I have to win (laughs) ”.

"I had only one goal: not to leave Marquez in front even for one corner"

Your fight with Marquez recalled those with Dovizioso…

“I don't know about that, but I can say that I had a lot of fun (laughs). I decided to stay at the front because that was the best possible position, when you are on tracks with little grip like this it is easier to defend than to attack. We did an incredible pace I think. He was only trying to overtake me in the final part of the race because before that it was useless I think. I saw he was overtaking me in the points where I was strong in the exit and in the last part of the race with the rear tyre that was a bit down on grip to cross, the overtake was more easy.

Did you have a perfect race?

“Right now I have to think only of myself, to be as fast as this weekend, not Quartararo. Before talking about the championship I have to recover points, 43 remain a lot and I will have to always be in front of Fabio. However, my ambition is very big and this victory gives me great motivation ”.

Any dedication for this victory?

"I say thank you to Ducati, to my family and to my girlfriend Domitia, today she will have suffered a lot!".