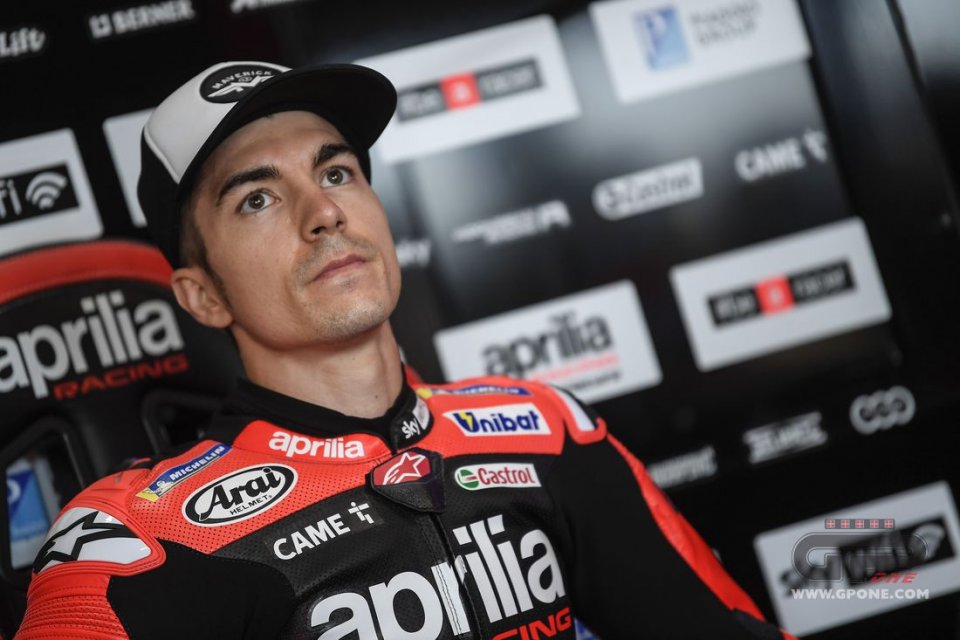 Maverick Vinales must have undoubtedly thought at the end of the first day of testing at Aragon today that it’s not going to be a downhill slope. The times he set at Misano had surely galvanized him, but today the harsh reality was revealed quite clearly. The Aprilia is a bike with a lot of potential, but also with a character that needs to be fully understood. Let's say that the rider and the bike at this moment are still at first base, while actually getting it on appears a long way off.

The 20th quickest time today is not much to shout about, but the fact that he didn’t make any mistakes and also that he made gradual progress suggests that the couple can work. It just won't happen straight away, as some observers had speculated. The M1 and the RS-GP are too different to imagine that Vinales will immediately be able to lap at the pace of the best, but the Spaniard undoubtedly showed the right attitude and before Sunday he will get even closer. Perhaps even studying the telemetry data tonight, comparing it with that of Espargarò, will help him understand where today’s one second gap between the two Noale riders lies.

"I just thought about getting used to the bike, which is not as easy as you can imagine - said Vinales - I did some great individual sectors, so I'm very positive. We made a big step forward between the first and second sessions, not only in terms of times but rather for my sensations on the bike. I think tomorrow we will do another one, improving even more. It is difficult to do well immediately in 45 minutes, you don’t have time to make big changes and try, you just think about lapping. The sensations were very positive, the way I have to tackle the track is totally different. It is difficult to do what the bike asks of me, because I was used to doing things differently and for this reason I did not put my ideal time together".

How different is this Aprilia from your previous bike?

"There are so many different things to understand about the bike, also as for the controls on the handlebars, everything is different, there are many buttons. The instrumentation is as well, but it takes very little in the end to get used to these things. For me the most difficult part is to make the four sectors in a row, this is the most difficult part because I tried to push in one way and then the other and I keep doing mistakes during all the laps. At this moment, I am not riding the bike at the maximum and this is important because at the end of the day we have a good ideal lap, a good rhythm and we need to keep looking on that because I think the key right now is to stay calm and keep working because we are far away from the maximum.”

How did you feel this morning when you went out on the track for the first time?

"I felt very excited this morning, even if in the first session I was also very nervous because obviously everything is different. But after a few laps I only thought about riding and today I did a lot of laps to learn how to use the bike. I feel I’m on the right track. In FP2 I went very well and above all I improved my benchmarks quite easily. We didn't do any particular team work, Aleix and I, but I saw the lines he does which are completely different from what I would have done. "

Where do you think is the area where you can make the most progress right now?

“I am still braking too early, that is the main issue, I brake early because I was used to a different riding style, but we are getting much closer. In Misano, we got close and here I think by the days and practices we are going to get close. Right now, for me, the most difficult part is the braking because the acceleration is really good. I keep controlling the slide and that is not an issue, but the braking area is where I need to get used to it because it is too different from what I was used to riding. Overall, it makes a difference on the lap time but I think we are going to ride, doing laps and trusting the front more than anything else. After only 35 laps at this track, it is fast and it is hard for me to adapt quickly in just 45 minutes, 45 minutes and a time attack. This is hard, but anyway I think now we made a good FP1 and FP2 and have collected the information.”

What happened when you had that problem at the last corner, it almost felt like the bike was closing the line more than you expected.

"Yes, I went onto the curb. I didn't expect it to close the line like that, I'm not used to it yet. It's just a matter of getting used to it."

Are you continuing to use Aleix's set-up, or have you started making some changes to the Aprilia?

"For now we have not touched the bike, I’m still with a standard set-up like the one used at Misano. I feel far from the potential of the bike, I still have to learn a lot before squeezing it to the maximum. From FP1 to FP2 I improved almost by one second, I think I need to explore the bike first and I don't want to be in a hurry. Better to take one step at a time, because the lap times come in a completely different way than what I was used to. Maybe tomorrow I'll try something different, maybe some different spring or something like that. Now it is much more important for me to know the bike rather than experiment. "

You weren't that far off as far as the lap times go. Did you expect that?

"I didn't expect to be so fast, because it wasn't easy at all to do it with just 40 minutes of practice per session. So many things to learn and understand, it's not easy. In tests it's different because you can do things more calmly, think about data after each return to the pits. During a race weekend it is hard to improve quickly. But I really like the track and I think the time is excellent in the end. The ideal times are very good, now I have to put them all together and make the time that I can".

This morning you posted a beautiful photo with your daughter and wife on the track. You had a smile that we have seen very little recently.

"I'm happy, I freed myself from a weight I had. Now I feel like I'm breathing again."

How do you think you can finish this weekend?

"I don't set myself any goals. I still have to work a lot but I know that the sensations are good. I'm happy with that, it's the really important thing. This allows me to sleep in peace, the rest will come by itself."

Is this move from Yamaha to Aprilia more difficult for you than the one from Suzuki to Yamaha in the past?

"The Yamaha and Suzuki are very similar overall, so that change was not very difficult. While everything is different now, the engine and the philosophy of the chassis are completely different. They are difficult things to learn quickly. I think I have a good potential and also an acceptable pace now. It only takes a few steps forward to have an excellent single lap ".