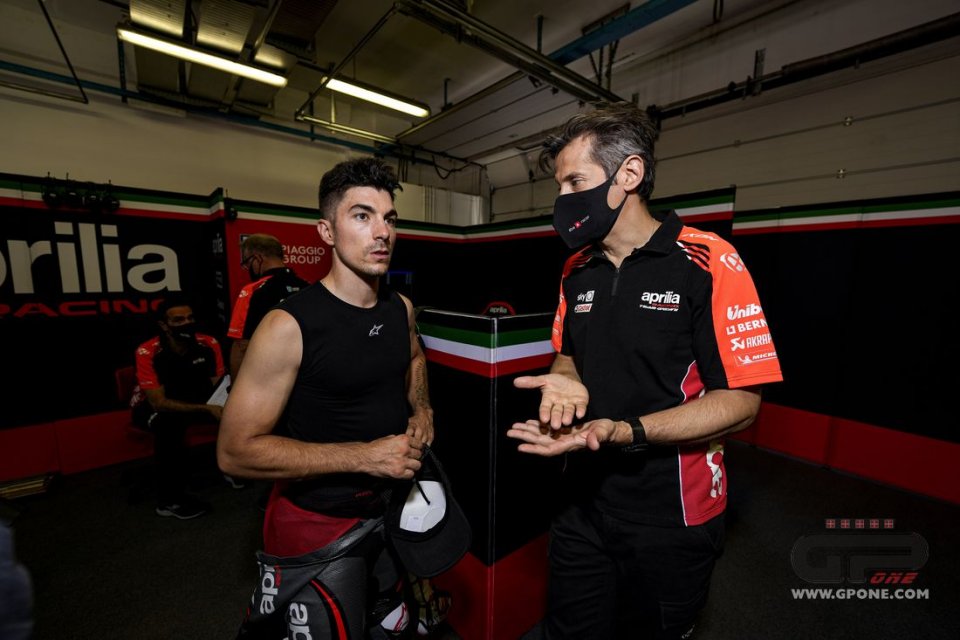 2022 was gearing up to be a transition season for Aprilia. With Iannone disqualified, Savadori had to be drafted in, without any experience, at the last minute. The team had found itself virtually with only Aleix Espargarò and a lot of work to do to reach the top. In a few months everything changed: Dovizioso agreed to do some tests, then Vinales divorced with Yamaha and accepted Noale's offer on the fly. In addition, the first podium in MotoGP arrived at Silverstone.

"Of all these things, the only one I didn't expect was the arrival of Maverick. I've been preaching for a podium for some time (laughs) and I thought we could get Dovizioso too” smiled Massimo Rivola, CEO of Aprilia Racing, the man who after coming from Ferrari and Formula 1 in 2019, has changed the face of Aprilia.

It could be said that you have now accepted the challenge of Vinales: an undisputed talent, but he divorced with his team already in Moto3 before doing it with Yamaha. Did you have any doubts about the difficulties of managing such a rider?

"I have absolutely never had any doubts. Indeed, I have always looked at Maverick, even when I was not in this paddock, as one of the greatest talents of the entire grid. I still think so and after two days of testing together even more. I am convinced that he can really take us to the top, also because on the other side of the garage we have Aleix who is at the highest point of his career as an athlete, both physically and mentally and for his knowledge of the bike. The fact that we have two riders who can reach that level means that we can start to bother everyone, maybe we will not have as much sympathy with everyone now (laughs)”.

"Vinales a difficult rider? You can work on character, but you must have the potential"

After working with him, albeit briefly, what effect has Vinales had on you as a person?

“I can't but speak well of him. It's probably all plain sailing at first and he knows he can't miss any more opportunities, but I think he's learned from his mistakes. I generally prefer to work with those with the greatest potential, regardless of their character. That can be sorted out, while if there is no potential you can hardly bring it out. His approach to us was not excellent, it was even more, perfect from all points of view: technical, human, the humble nature he showed, making himself available to the team. An environment like ours, smaller and very passionate, I believe can make a difference more than any technical details".

You are not afraid that he will try to break an engine ...

“If we get to that point one day, we'll have to do an examination of conscience too. I hope it doesn't happen”.

"Next year Vinales will win with Aprilia"

Now you have a top rider, a rider who has already proved to be a winner in MotoGP, does this give you a different responsibility?

"I raise the bar, if we forget about this year, I think he will also win with us. We need to have a little more responsibility and the luck, which comes from work, was that the podium arrived at the right time. Aleix says that he has removed a weight from his shoulders, but it is also true for us, for the guys from Noale, who can say that we can also do it in MotoGP, that we are not there by chance. Today Aleix was not satisfied but he was 2nd, all this gives us more responsibility but so be it. I expect we will put even more effort and concentration into it, we don’t lack the desire to have more responsibility and we are not afraid ”.

"I'm happy that Dovizioso is going to Yamaha, in a year and a half he will be an even better tester for us"

The arrival of Vinales has removed Dovizioso from future plans, did you ever really hope that he would race with Aprilia in 2022?

“No, if anything I hoped that he would race with us in 2021. Then, when we were able to take him to do some tests with us, it was always clear to me that he could have been a great test rider for us, but not a rider. In the historical moment he and we were, we both needed something different. I can understand very well his choice, we talked very openly. The test with Vinales was scheduled with Andrea and he understood the situation very well, as I told him that he should have taken the opportunity with Yamaha. There has always been a very open relationship, in fact I also told him that for me it was something great because in a year and a half he will be an even better tester for us. I went on with the work (laughs). I think he felt very comfortable with us, even if a test is a much more relaxed context, we were very serious about Dovi coming. We tried to do everything he asked of us in record time ”.

It was an experience that didn't last long, but was he able to give concrete help?

“Yes, we followed some of his indications and others we didn't, because he had been involved with a certain type of riding and a certain type of bike he was used to for 8 years, so it is normal that he was looking for certain types of sensations. In fact, having a rider coming from Yamaha now is very interesting, we will be able to make comparisons between his comments and those of Dovi, who came from Ducati, it will all help us to understand where our bike is. We also now have confirmation that not only Aleix can ride our bike, which was one of the fears we had. Savadori himself, with more races on his shoulders, would have come close. It's a great satisfaction, we know what our weaknesses and strengths are, I feel optimistic thinking about which direction we will take next year”.

Are you sorry you had to give up on Savadori?

“I'm sorry that Lorenzo didn't have the chance to finish the season. I am convinced that with two full years he would be a rider you would no longer take away from MotoGP. I explained the situation to him and he understood it perfectly, he will remain an Aprilia man and we will do some wild cards together ".

To be continued ... Tomorrow we will publish the second part of the interview with Massimo Rivola. Stay tuned!