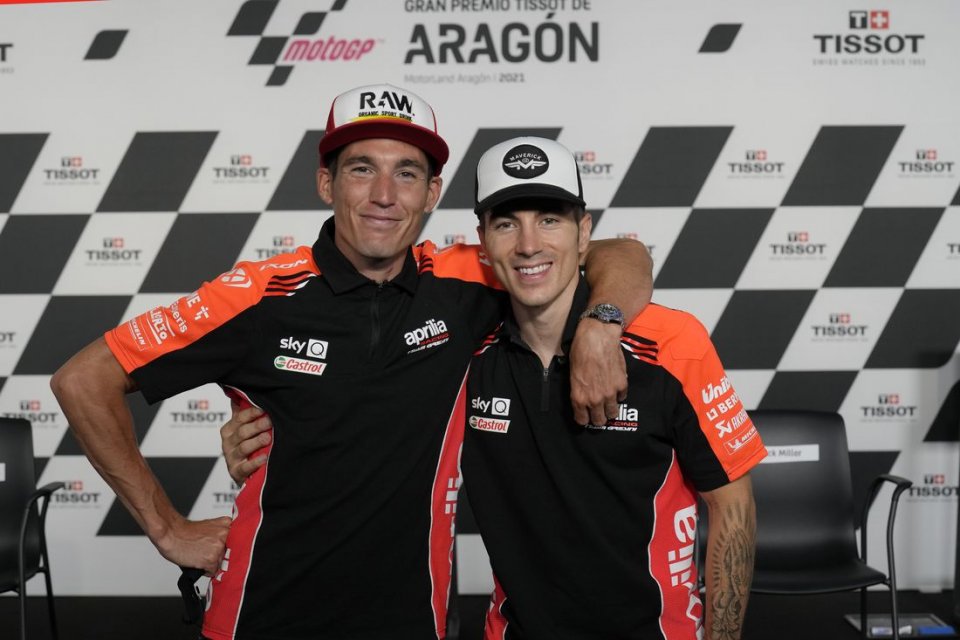 Maverick Vinales stepped into the role of official Aprilia rider for the first time today, attending the press conference preceding the Aragon Grand Prix wearing the colours of the Noale manufacturer. It’s a big change that is obviously at the centre of everyone's attention this weekend, with expectations that have definitely risen after the first positive test by ‘Top Gun’ at Misano on the RS-GP.

From a certain point of view, one might even think that there is too much pressure on the rider’s shoulders, but he seems absolutely determined to transform it into determination and the desire to demonstrate his full potential. In Yamaha he succeeded at times, the hope is that he will find in Aprilia the environment he needs to express himself at his best. We can say that the Vinales-Aprilia pairing is really at the centre of everyone's attention, given that during the conference none of the journalists asked a single question to the other participants, making Vinales and Espargarò the absolute protagonists of this eve of the Aragon weekend.

“I’m more than excited, I’m very hungry and very motivated to start this story with Aprilia,” said a smiling Vinales - Right now these six races ahead are just a present to prepare next year much better, so our priority is just to learn. Sure, it’s very different, so I need to learn a lot, I need to learn quick.”

“Aleix’s podium just set up a lot of fire inside of myself because all we want is to push. Seeing him go so fast gave me extra motivation. I’ve been away for a while, but I feel very positive to be here, to get the experience of a race weekend as an Aprilia rider and we just need to learn. This is our main priority.”

Now that you've tested it, can you tell us where the major differences are between the Aprilia and the Yamaha?

"Difficult to say, because in reality I didn't have much time to do any in-depth analysis. I just thought about adapting to the bike by doing many laps, to better understand how it all works. The way the bike accelerates is very different, there is a long road ahead to learn everything. "

There have been so many changes for you in a short time. Was it stressful or difficult?

“I think more than difficult, it has been a release for me because I needed to do something different, honestly, because I was in a block moment. I needed to move on and to improve myself, so that was the occasion, and also the opportunity. As soon as I did the test I wanted to race, I felt good on the bike, I felt quite quick and also I felt during the race weekend is when you can improve yourself. So, there was no reason to stay at home. It is important for me to gain experience and work hard in these races to better adapt to this bike".

How important was Aleix in convincing you to join the Aprilia family?

"Aleix was important, but I don't think it was because he insisted that the bike was already competitive or anything like that. We have trained many times together, we have talked about a lot of things in the last few months. I enjoyed talking with him about where we could go with this Aprilia project more than where it is right now. This was the thing that really convinced me. "

Did you ever think that it would be possible to finish the season with Yamaha in any case?

“Honestly, everything went so fast, so I don’t want to talk about the rest or the others. I want to talk about Aprilia because at the end of the day right here, I’m here to learn, to get experience, and especially I’m here to learn and improve myself. The two days at Misano have been great, I released a lot of weight off my bike because I just rode and enjoyed and I was already ready to race in Aragon. I’m really motivated and I’m passionate about MotoGP, so I can’t wait to be on the bike in the morning.”

Do you think that in the future someone can join Aprilia who had been with you in Yamaha, like Julian Simon who was a rider coach?

Your father hinted at the possibility that you would have done a race in SBK if you didn’t have a chance in MotoGP. It is true?

"No, I never thought of racing in SBK, even just for one race, because my goal has always been something else. My goal was to be in Aragon to race with Aprilia, the team with which I will also be on the track in 2022. I wanted to be here and we did it, now we can work on the future together ".