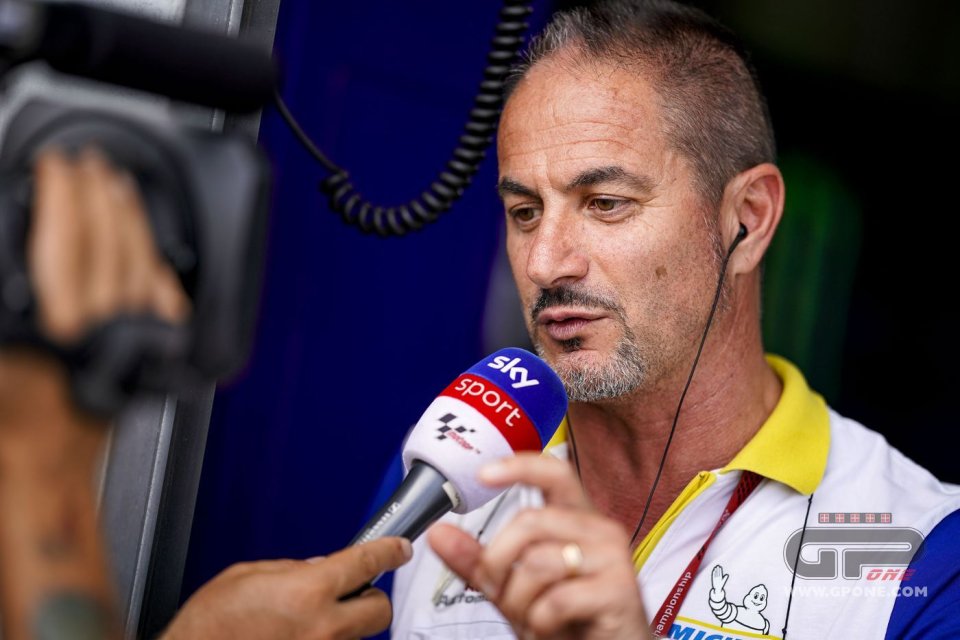 After the Silverstone race, some riders complained about the performance of the tires. The most striking case was that of Bagnaia, who ended up right on the edge of the points, but Valentino Rossi and Mir also complained about the tires. Piero Taramasso, head of Michelin, not without first analysing the first data, explained what went wrong in England.

"In general we noticed a higher level of tire use, both front and rear, compared to Friday and Saturday practice sessions and this is what caused a drop in tire performance - he told us - We had predicted that we there would have been a drop after ten laps, but it came much earlier, for some riders already after five”.

In these cases there are many things that can go wrong.

“Silverstone is a circuit that stresses the tires a lot, being consistent has always been a difficulty of that circuit - he continued - We had not been there for two years and we brought the new casing for the rear, introduced last season, which we had never tried there. We only encountered this major and, in some cases, irregular wear with some riders, but it was not linked to the type of bike, in fact there were six different manufacturers in the first six places ".

Taramasso does not deny the situation, he knows that in certain aspects you can and must improve.

"It is clear that we need to improve on anticipating what can happen in the race - he admitted - I speak of various aspects: in the case of a change in temperatures, if the pace will be faster or slower, what will be the consequences if you change one of the two tires on the grid. To do all this we will have to work better, especially in FP4 with a full tank of petrol and doing as many consecutive laps as possible. I know it's not easy because times are tight, but we have ideas to improve this aspect and avoid making wrong decisions ”.

Meanwhile, Michelin technicians are working to understand in depth what happened to the tires of some riders.

“We will continue to investigate certain cases to understand the causes, there are many aspects that we can analyse, plus the teams help us by providing us with their data. So we will be able to give answers to the riders who ask us for explanations, answers that will be based on objective data” he promised.

The Italian manager also knows that the paddock is full of urban legends that he wants to dispel.

“When there are these situations, people's fantasies are unleashed - he smiled - For example they say that to Quartararo these things never happen because he is French, but it is impossible to advantage or disadvantage a driver, the tires are assigned by drawing lots. It is not even true that there has been a decrease in the budget and that we are saving money, fortunately our company has handled the emergency caused by Covid very well and is in full health. On the contrary, we have all the technologies available to investigate what happened ".

BMW’s Dutch rider talks about the new riders: “They’re fast. Petrucci has proven so much in several championships, and Gardner is a Moto2 World...
4 days 2 hours ago

he French rider in his career has raced in SBK, Supersport, 250 and even the Dakar, now he wants to test himself on the Isle of Man
4 days 4 hours ago

The young, almost 20-year old, Storm Stacey will be racing in the British Superbike 2023 with the GR Motosport Kawasaki team for his fourth...
5 days 2 hours ago

All this probably stems from the purchase of a van in Andorra a dealer says Hector never paid for.
5 days 8 hours ago