Alongside every great rider there is always a great crew chief, a rule that is perhaps not so strict but which is valid in many cases. Sometimes, the rider and crew chief grow up together and this seems to be the case with Fabio Quartararo and Diego Gubellini, who have formed a formidable match since 2019. The Italian engineer was the guest of a GPOne live broadcast (you can find the full video above) in which he showed the typical rigour of his role combined with a marked irony: "Fabio is more my secret weapon than me his” he introduced himself laughing.

Diego, in 2019 Quartararo arrived in Petronas almost by chance and at the beginning he was not supposed to be your rider. Did that make you perplexed?

"I like to have an ongoing relationship with the riders, in just one season you can't exploit all the potential on both sides, so the idea was to continue the collaboration started with Morbidelli in 2018. I still wanted to work with a young rider and I was happy, Fabio was certainly a talented rider. I was sorry not to be able to continue with Franco, but I liked the idea and you have to be lucky to work with such a talented rider. "

What was your first impression on his debut?

“He was fast right from the start, that was clear from the first tests, because he was able to do many laps with times not far from those of the best. Then he also acquired the ability to do the flying lap and did it quickly. From there it was a job to accumulate experience, in modern MotoGP it is not enough to be fast, to have the pace or to be intelligent, but a mix of all these things ”.

What is a defect of Quartararo?

“A person needs to be evaluated as a whole and we all have defects, he definitely has things to improve and he is trying to do it. In my opinion it is important to understand that in sport you can always improve, the most important message that he must have in his head is that you must never feel that you have arrived. I imagine champions like Marquez and Valentino think like that ”.

On the other hand, what is his strength compared to the other Yamaha riders?

“Fabio manages to be fast using different strengths. What I mean is that he is able to go fast depending on the circumstances by braking harder, or by having more cornering speed, or by managing the rear tire better. His strength is being able to jump from one strength to another while remaining consistent during the race or from one track to another ".

"Quartararo was already consistent in 2019, last year all the riders with the 2020 M1 achieved mediocre results"

How has he changed from last year, in which he either won or vanished, to this one, in which, besides being fast, he is always consistent?

"In 2019, on his MotoGP debut, from Barcelona onwards he was either fighting for the podium or crashing, so he was able to be consistent with that bike. 2020 was a very particular season, for the calendar but above all from the technical aspect. We had inherited a bike without testing it, so we were slightly at a disadvantage, it only arrived in testing in Qatar. The 2020 bike was completely different both in weight distribution, engine delivery and also in the use of tires. We managed to go fast where Fabio made a huge difference, let's say Jerez and Barcelona, ​​where Fabio would have won also with a Ciao (laughs). The key to understanding last year was that all three riders who used that bike, so Fabio, Maverick and Valentino, achieved mediocre results and only managed to patch things up in certain places, where they could make a difference. While Fabio fought for the podium every Sunday with the 2019 bike ".

"I told Fabio: you don't need to be stratospheric on good days, but very good on bad ones" 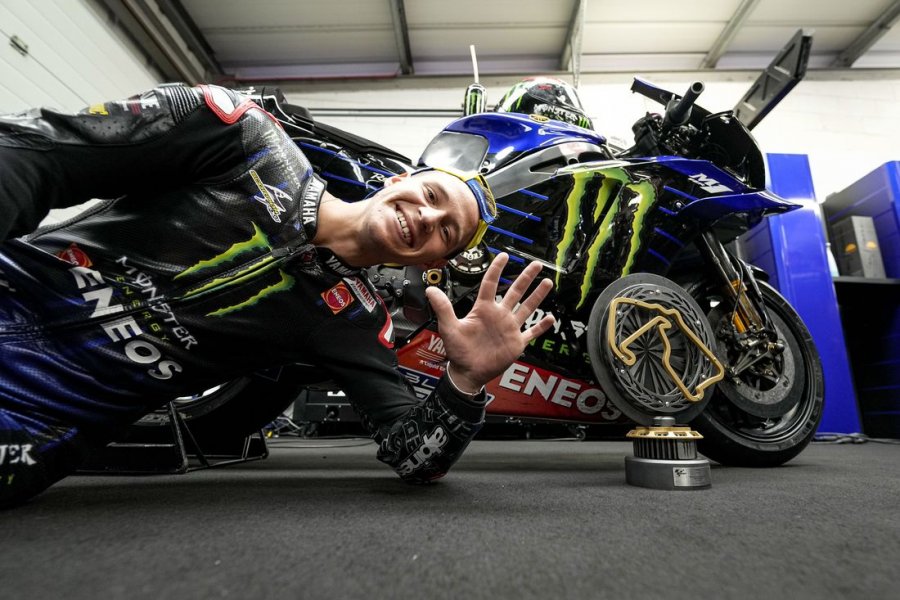 And what about Quartararo's change from a personal point of view?

“In addition to growing up, he has been able to experience how the races develop, so he is calmer because he has lived through more situations, which as a rookie he did not. Fabio started this year with the idea of ​​trying to fight for the world title, not winning it. As I told him: you don't need to be stratospheric on good days, you need to be very good on bad ones. That's what he is doing, like in Austria”.

Does he have any particular superstitions?

"He likes number 17, but not 13. Then a series of rites: in practice he fist-bumps only at the people who are in front of him as he goes towards the bike, while for qualifying and the race he does it to all those of his group".

What changes for a crew chief to switch from a satellite team to an official one?

"The work is similar, but the objectives and the pressure change, as well as the support from the manufacturer, in the sense that you have to work both for the race weekend and for the future. You ask yourself different questions already thinking about next year ".

Do you also need imagination in your work?

“No, it's all calculated and weighed. It is a job that is done in real time, so many things cannot be planned. So you have to prepare everything first considering all the variables ".

What is the most important quality for a crew chief to have?

"Having an overview and be ready to develop variations".

You lived in the era of 2-strokes and of technicians who were also a bit sorcerers, don't you regret those times when you had to have a stroke of genius?

“Actually, not much has changed, only different tools are used. If once we looked at the spark plugs, now we study statistics, data, which must be cross-referenced with the sensations of the rider and with the stopwatch. There is always a part of the risk that the technician, sometimes together with the rider, has to take. For example, the choice of the soft front tire at Silverstone was a painful one for me all night (laughs), it was not a trivial decision, we made it with a bit of feeling. Statistics give indications, not answers”.

Are you crew chiefs also a bit like psychologists with your riders?

“I am dealing with a very young rider; he could be my son (laughs). In practice sessions I try to put him in the best possible condition, but in some situations, you have to try to push him to give his best. You ask him to give everything and this is a responsibility that I feel, inevitably an emotional bond is created. On my part there is a certain apprehension and he probably feels this sense of protection ".

"Vinales will be fast on the Aprilia, Dovizioso will be able to help Yamaha"

What do you think of Vinales’s move to Aprilia?

"Maverick scored less than Fabio in the race, but until the first race in Austria he was always very fast in practice, he was often ahead of Fabio, so in terms of absolute speed it is not true that Quartararo was the only fast Yamaha rider. In a race weekend there are some key moments that can make everything turn either positive or negative. The skill, or luck, of some riders is to be more performing in those moments and to get a better result in the end. Sometimes a small difference at a particular time can lead to a completely different result. Maverick is a very fast rider and I expect him to be very competitive at Aragon, at least in practice, because in the race he will have a new bike to discover ”.

Dovizioso will arrive in Yamaha from Misano, can he help in the development of the M1?

"I am happy because I have always considered him a very intelligent rider. In his career he has always shown that he understands how to get the best out of the strengths of the bike he was riding at that time. He will be of help in Yamaha because he will be able to give good indications, the more riders ride the same bike the more information we have ”.