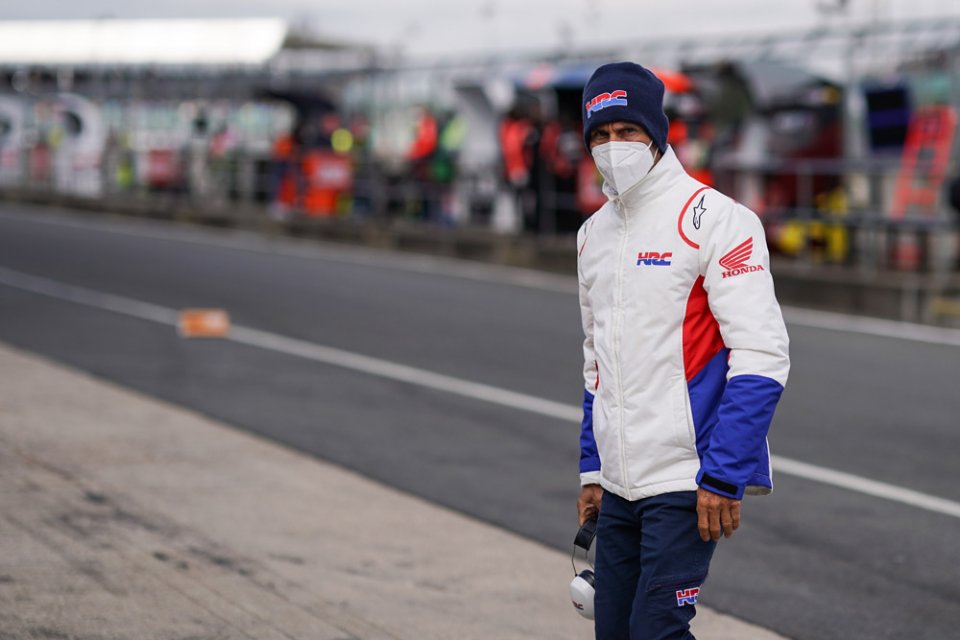 For once, it wasn’t Marc Marquez who saved the Honda, which is sailing in rough waters and with many leaks in its hull. Pol Espargarò was the star at Silverstone. On Saturday, he did everything he could (and more) in qualifying and, on Sunday, he spared no effort in the race. In dark times, this is good news for HRC, and its team manager, Alberto Puig, also realizes this.

“This weekend was a very important turning point for Pol Espargaró,” he stated. “I think he’s  taken a huge step forward compared to what he’s done so far in 2021. I think the way he approached the race was very good, and he was able to show his potential, his true potential. Pol is a rider who can remain in these positions, so we hope that, from now on, he can continue this way and make progress. We’re very happy for him within the team and HRC. It was difficult for him, and he deserved this good result. He was fantastic during qualifying, getting the pole position and, although he was obviously aiming for the podium in the race, he was able to take an important step forward and get back to his old form.”

Marquez has had ups and downs, with good performances, but also hardly excusable mistakes for a champion with his experience.

“We’ve seen Marquez stronger in these last few rounds,” Puig tried to see the glass half full. "Unfortunately, Marc misjudged in overtaking with Martin. It wasn’t his intention, but they touched on the opening lap and fell as a result. I feel bad  for Martin and his team. These are the races, these things can happen on the first lap when all the riders are together. It’s a shame because Marc could have fought for the podium, perhaps not for the win, but definitely for the podium.”

The manager was definitely emotional.

“It was sad to see Marc fall on the first lap but, on the other hand, it was thrilling to see Pol race,” he commented. “He tried to stay ahead in the opening laps and then rode well to defend himself from his rivals and survive until the end of the Grand Prix. His goal was to put together a good race. We weren’t looking for the podium. When you start the race from the pole position, normally your goal should be the podium, but that wasn’t the case. However, it’s true that Pol had a big drop with the rear tire. Perhaps our decision to use the soft wasn’t correct. Above all, the important thing is to be fast again and have a good weekend from Friday to Sunday.”

The next stop will be Aragon, in less than two weeks.

“It’s a difficult track, but it suits Marquez a lot, and Honda also achieved good results there in the past,” Alberto explained. “Of course, we’ll be in a particular situation with Marc not being in at his best. However, we know that he’ll still try to express his maximum potential. It’ll be interesting for Espargarò to confirm his progress.”

The official announcement came today. The rider from Ascoli: "I have no expectations other than to return to a serene and clear climate inside the...
13 hours 18 min ago

This is the first MotoGP pole for Honda since Pol Espargaro at the British GP last year (21 races), ending the longest sequence of successive premier...
18 hours 12 min ago

“We want to thank the entire paddock and especially the Suzuki team that helped us rebuild the garage. We’re ready to start the Japanese GP.”
23 hours 25 min ago