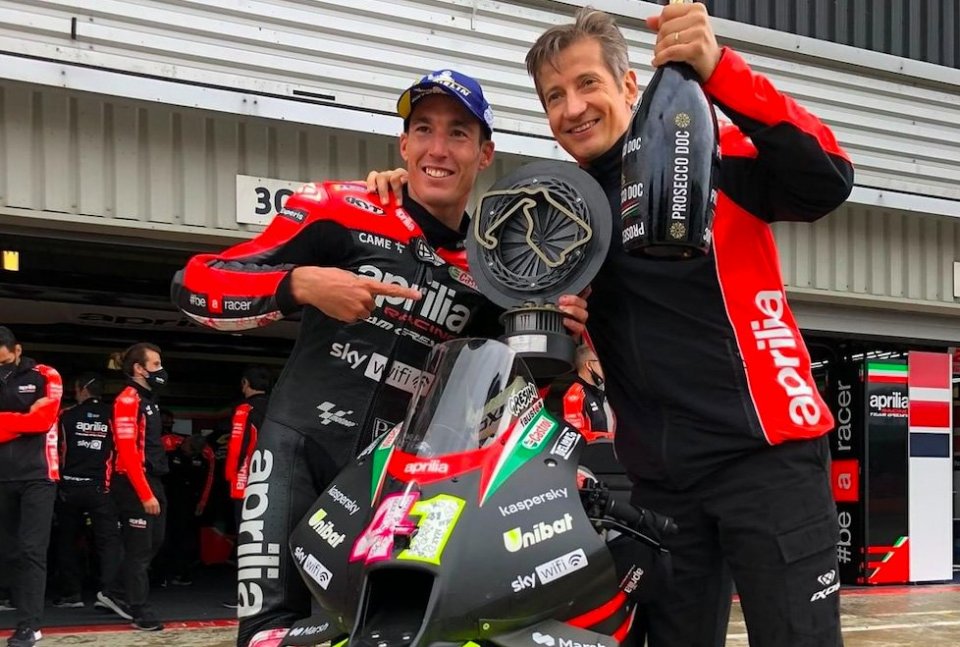 Aleix Espargarò is undoubtedly the man of the day at Silverstone. The podium he achieved today represents on the one hand a point of arrival for the Aprilia MotoGP project, while on the other it is the perfect springboard towards a second phase of the same project. The goals become more ambitious and the arrival of Maverick Vinales can only raise the bar in view of 2022.

Espargarò was able to enjoy the podium after conquering it by force, holding off to the very end the attacks by Jack Miller (Ducati) and crowning a weekend of the highest level. For the Spaniard there is also another satisfaction, namely that of having won a bet with Aprilia, which is now rightly called upon to honour its commitment.

"Now Aprilia owes me a MotoGP bike! I'll add it to my collection - said a satisfied Espargarò - I think I'll put it in the bedroom if Laura agrees. In the living room I have the CRT, but I hope to have more to put at home in the future in all corners "

Aleix Espargarò: "I won the bet, now Aprilia has to give me a MotoGP bike for my collection"

You won the bet, now tell your emotions for a long-awaited and above all much desired result.

"It’s like a dream! I’m super happy. It has been a long way to arrive here. Step-by-step I always believed in the project and I work more than ever, so for everybody in Aprilia this is like a dream. We have to keep working hard and I would like to say thanks to all of them. It hasn’t been an easy race and I didn’t want to make any mistakes. I dedicate this podium to my wife Laura, who has always supported me even in difficult moments ".

The podium was almost becoming an obsession...

"It was important to get on the podium this season, but the really important thing was to always improve and we have done that. I feel we have done a great job; we are closer than ever to the top and this result must give us the energy to improve even more. Fantastic for Aprilia, I think we really deserved it. A few years ago we were really in trouble, but we didn't give up and now things are going in the right direction. We deserve it. "

What has really changed in Aprilia?

"Aprilia has made great strides forward since Massimo Rivola arrived, our team has improved a lot and the quality of the work has increased a lot. Next year we are going to be full factory and also Maverick is joining the team. The future looks good for us and obviously the season is still on and I want more and more. It’s not enough for me. Now I have a lot less pressure because everybody was asking me ‘is this race the podium one, is this race the podium one’, so finally let’s go for more and Aragon is a circuit I really love. We are in really good shape and there usually Aprilia is very strong, then it's not even one of Fabio's favourite tracks, so maybe the race will be a bit slower. The goal will be to keep fighting for the podium, but it's the same at every GP. "

Did you ever think that a rider like Vinales could come to Aprilia?

“Regarding Maverick, yes, obviously if somebody told you at the beginning of the season that you will finish with Yamaha and you will go to Aprilia, you will say it’s 10 steps back. But obviously the way he finished with Yamaha is not nice, but it’s not that bad because the Aprilia is a competitive bike. We’re still not at the level of the Yamaha, that’s for sure, but we are on the way and I think he will enjoy riding the Aprilia. He will have to adapt because it’s a completely different story to Yamaha, but as I showed today the bike is on the way.”

Did everything go smoothly in the race today?

"No, not at all! At a certain point the bike did not go while I was on the opposite straight and for a second my heart stopped. I don't know what happened, just that immediately everything was back to normal. I lost a few positions and maybe I could have followed Fabio without that problem, but that's okay. Maybe by staying with him I could have opened a gap to stay second, but that's okay. In the last lap I made a big mistake because I was focused just with Alex to try to attack him for second place and I didn’t really care about who was coming. And this was a huge mistake because I opened the door at the last chicane. But I think today I rode quite smooth, quite clever, saving rear tyre so I had more traction than Jack. And then I was able to get back my third position, but today the podium was mine, so I was fully convinced.”

You said you are one of the top three MotoGP riders. Do you think you confirmed it today?

"When I said that I feel like one of the top three riders in MotoGP, I meant that I think I'm riding in a way that would allow me to be in the top three now. I think that's true, but this is a sport where you have to prove what you are worth every time. I was already on the podium in other places, like at Le Mans or in Austria, but there the bike betrayed me. So I knew I had that potential and today I finally realized it by riding to the limit. My bike has improved a lot, but it's still not a winning bike, maybe without those problems today I would be further up in the standings, because in the end we are not far from the best three. Now we are all very close in MotoGP, except Fabio, who I think is the best at the moment. "

Do you think the world championship is already over?

"It's not so much about the points difference. Fabio is riding better than anyone else, he can make some mistakes but he is always on the podium. I repeat, it's not about the points, but about the fact that he really rides much better everywhere and I can’t see anyone who can beat him on all tracks, which is what is necessary to win a world championship ".

Today there are a lot of manufacturers which have competitive bikes. A different scenario than in the past.

"The level of MotoGP today is simply insane, the highest I have ever seen on the track. There are so many fast manufacturers, so many bikes that can win and get on the podium. There is a lot of technical development, anything can happen. Before that, you could only win on a Honda or a Yamaha, now everything is different and it's nice because all the bikes are different and yet they are all on a very similar level ".

THE VIDEO OF THE LAST LAP BETWEEN ALEIX AND JACK MILLER