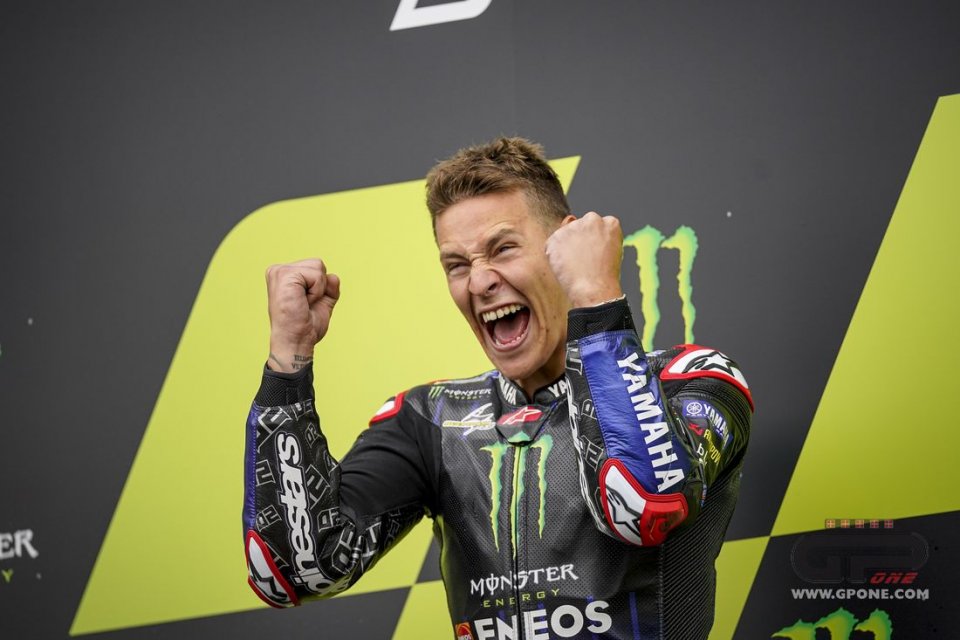 Quartararo's win at Silverstone was a very important one, that helped him put one hand on the title. It was a race worthy of a champion, one in which the Frenchman used his head in the early laps and then unleashed all his speed. Fabio proved to be the best rider on the track and the classification leaves you in no doubt, as he stretches his lead to 65 points over Mir who, it has to be said, before the GP had recklessly cast some doubts on the mental strength of the Yamaha rider.

Quartararo replied with the facts first and then with words: "It's funny, because I read a lot of comments about the fact that I could be under pressure and make mistakes, but it's exactly the opposite – he said with a bit of a dig at Mir - I've never felt so good on the bike and Yamaha has never put pressure on me. Having this lead doesn't make me think about the championship, I’ve only done it once, in Austria, when it was time to change tires for the flag-to-flag. The truth is, I've never felt better ”.

We could see it on the track, and only in the first laps was Fabio slightly subdued...

"I was a bit worried about the start because I used the two systems that lower the bike at the front and at the rear - he explained - At the start I didn't go badly, I saw Aleix overtake me but I didn't notice Bagnaia. Then the first lap was a bit complicated, I went very wide at turn 8, but I had a lot of confidence on the front, this has been the biggest improvement on the M1 this year, and it allowed me to make some good passes. I thought I would struggle in some corners but in the end, everything went well ”.

The Frenchman had to admit that of the five victories he has achieved this year, the one at Silverstone is the most important.

"It is for the advantage I now have in the standings, but before starting the race I told myself that I mustn’t think about the championship at least until Misano - he revealed - I'll continue like this, because I'm having fun and will face the next race as if it were the first one of the year ".

It will be Aragon, a track that usually he doesn't particularly agree with…

“Last year I started from pole, but I have never felt great there, I can't be consistent - he admitted - But it comes at the best moment, even in Austria in the past I was struggling and this season, I was fast. The confidence I have in the front will allow me to take a step forward. "

And you can forget about playing in defence…

"I don't want to change my approach, because I enjoy fighting for the win and if you get certain results then the title will come - he made it clear - Of course, if I don't feel my best in a race, I'll be careful not to make stupid mistakes, I know I have a good advantage and I will be able to manage it ”.

Before the race, Lin Jarvis also announced that Morbidelli will join the factory team from Misano onwards. Quartararo had this to say about the news, as well as that of Petronas’s farewell.

"The arrival of Franco is not something that interests me particularly, it is welcome but I am focused on my championship and I am not looking to the other side of the garage. As for Petronas, I'm sad because I've had a great two years with them. It sometimes happens that a team has problems, I hope they will get back to the top… but obviously behind me” he concluded with a laugh.